A two-year-long journey through a twenty-year-old classic.

A couple springs ago, when I was just getting into the planning stages of launching this blog, Viz hit us with some big news: They had licensed the original Sailor Moon, and they were going to re-release the entire series with a brand new uncut(!) translation. And just like that I had my first ever blogging project: A 200-episode series of Newbie Reviews. (So, you know. A nice, easy commitment.)

I loved Sailor Moon‘s directors’ later works (especially Ikuhara of Utena fame), and I knew a little about the series itself, but I really had no idea what to expect–whether I’d like it, or find it too childish, or get trapped in Filler Episode Hell. What followed were 24 months and 100 posts of quips, critiques, praises, giggles, feels, and flails, as I slowly fell in love with the cast, the stories, and the silliness. It was easy to see why the franchise had so many long-time fans. And, as the final credits rolled, I counted myself among them.

It’s been a fun journey, but now that I’m sitting at the destination, I wanted take a moment to look back, talk about the series as a whole, and maybe reminisce about the characters and moments that stuck with me the most. I, er… got a little carried away, and the post ballooned like a Dead Moon Circus tent. I’ve done my best to break it up with my favorite Sailor Moon gifs. Hit the jump to take a leisurely stroll down Memo(on)ry Lane.

END_OF_DOCUMENT_TOKEN_TO_BE_REPLACED

Now that’s how you end a season!

Viz rolled the SuperS finale and the Stars premiere into a single week, but I want to include a season retrospective like I did for R and S, so I’m going to just focus on the finale this time and knock out the first three episodes of Stars in a single post next week. It’s not ideal, but I think it’s the best way to handle things.

Our old friend Ikuhara shows up for one last spin in the director’s chair, and makes damn sure to go out on a high note. As rough as SuperS has been at times, this is a visually stunning and thematically satisfying finale, tying up loose ends and setting the stage for potential future conflict. Say what you will about this season or its series director, but the guy knows his way around a tight narrative and striking imagery, and that’s on full display here. So let’s all go out with a bang together.

END_OF_DOCUMENT_TOKEN_TO_BE_REPLACED

It’s final battle week, more or less, which in Sailor Moon terms usually means things are going to happen SuperSwiftly, and these episodes do not disappoint. Villains rise and fall, characters learn when to let go and when to hang on, and the Power of Dreams! leads to a finale both heartfelt and cheesy. I’m still trying to decide how well it worked for me personally, so let’s hit those recaps and see if we can’t parse it out together.

END_OF_DOCUMENT_TOKEN_TO_BE_REPLACED

Welcome to the place where dreams literally go to die.

Our equine priest might have been harnessed, but the season is still galloping forward with no sign of slowing down. Dreams of childhood and adulthood meet, clash, and then find ways to coexist, our heroes face their lingering doubts and emerge stronger than ever, and our antagonists continue to fascinate me with bursts of sympathy and humanity. The filler wastelands are but a distant dream at this point. Onwards, noble Alicorn, to the SuperShowdown!

END_OF_DOCUMENT_TOKEN_TO_BE_REPLACED

I’m back from paradise with a slight tan and many fond memories (KU winning! Watching the sun rise over a volcano! Seeing dolphins! Eating a burger with a bun made out of ramen noodles!), as well as a whole mess of Sailor Moon story to recap. We’ve entered the home stretch, and SuperS is once again a solid combination of character work, circus imagery, and coming-of-age themes.

…That said, my forehead IS rather red from some serious face-palming, because holy cowbell, are our scouts the worst detectives ever. This week is full of shocking!Reveals about our villains, who may be the least subtle enemies the team has ever faced, and it’s pretty (un?)intentionally hilarious. I’m starting to think the Moonies are doing it on purpose at this point, like Inigo Montoya fighting with his left hand. “If I use my right… over too quickly.”

At any rate, let’s enjoy both the giggles and the thoughtful “hmm” noises together.

END_OF_DOCUMENT_TOKEN_TO_BE_REPLACED 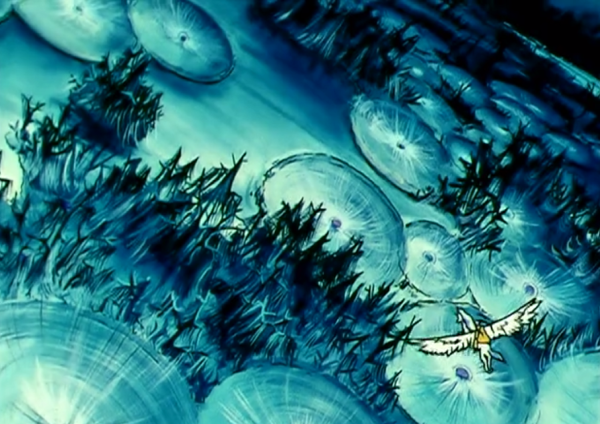 The story is back in more-or-less full force, as we (finally!) learn more about Pegward and his mysterious Dream World and forward the odd little relationship developing between Chibiusa and her magical boy. Fittingly, Sato and Ikuhara are back in the director’s chairs this week, which might explain why both these episodes are not only quite pretty, but also hilarious. Plot, shiny cinematography, and giggles? Sounds like a good week of Sailor Moon to me.

END_OF_DOCUMENT_TOKEN_TO_BE_REPLACED

Sometimes I’m a little sad I didn’t get to experience Sailor Moon as a kid (Li’l Me would’ve loved to have been Sailor Jupiter for Halloween), but I do think watching as an adult has its own unique rewards, as I’m better able to see the kinds of things (largely positive, and sometimes quite progressive) that the series is doing in terms of overarching ideas and thematic messages. Plus it’s been fascinating to look at the early work of some of my favorite anime directors and see the creators they were and how that influenced the creators they’d become.

That’s particularly true this week, as we see an episode about an artist struggling to follow his dreams while also trying to make end’s meet, and it’s hard not to see it as a fictional outburst of frustration from the SM team themselves. It also hits way too close to home for a writer staring at her dwindling twenties and wondering when/if she’s gonna make something of herself. Suffice to say, I had feelings this week, and they were only marginally related to the episodes themselves. So let’s discuss, shall we?

END_OF_DOCUMENT_TOKEN_TO_BE_REPLACED

Friendship is a many-splendored thing.

The focus has been firmly on the Bunnies this season, so it’s always nice when we get an episode that highlights not only the other Moonies as individuals, but also their relationships with each other. As opposed to, say, the general cuteness between Ami and Makoto, this week brings back into focus a somewhat rockier relationship: Mako and Mina, two kids who may never have become friends without their past lives to bring them together.

END_OF_DOCUMENT_TOKEN_TO_BE_REPLACED

Shooting for the moon and landing among the… Mars?

Yes, it’s that time of season again: Time for our scouts to get there level up on and try out some cool new abilities (and animation) so they can help Usagi win the day against the newest Big Bad. I always enjoy these episodes, not just because they force the series to spend time with the other Moonies (although there is that, especially given the heavy Bunny focus of SuperS), but because they often feature nice morals about self-confidence, individuality, and friendship.

And then sometimes, wedged in there, you get an episode about Usagi and Chibiusa going to the dentist. But, hey, nobody bats .1000. And at least there was a hefty amount of silliness and fun scenes (such as the one in the screenshot above) to pad both episodes in enjoyable interactions.

END_OF_DOCUMENT_TOKEN_TO_BE_REPLACED

Out with the old, in with the who? 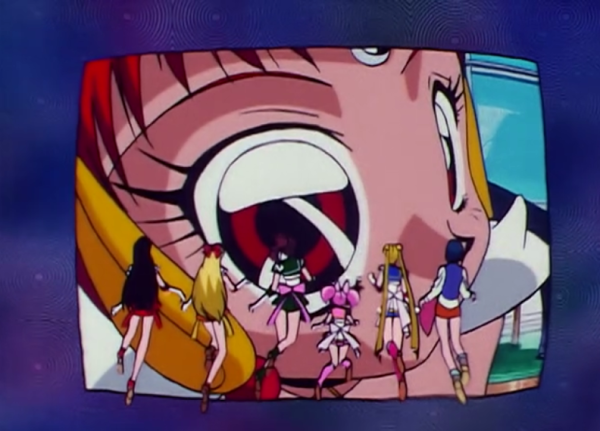 I’m on the road for the next couple weeks, so I was already planning on this post being on the short side, but, er, well… I may have left my notes on these two episodes at home (yes, I take notes on paper, like some kind of peasant). And, what with all the running around, I didn’t have time to rewatch the episodes. Meaning that all I have to remind me of what happened this week is a series of screenshots and whatever plot darts stuck to my brainspace. So today, we’ll be playing a new and exciting game: Josei Vs. Fallible, Faulty Memory! And a 3, 2, 1…!