Welcome to the place where dreams literally go to die.

Our equine priest might have been harnessed, but the season is still galloping forward with no sign of slowing down. Dreams of childhood and adulthood meet, clash, and then find ways to coexist, our heroes face their lingering doubts and emerge stronger than ever, and our antagonists continue to fascinate me with bursts of sympathy and humanity. The filler wastelands are but a distant dream at this point. Onwards, noble Alicorn, to the SuperShowdown!

Helios steps out of the sparkles to tell the Moonies what the hell they’ve been fighting for 34 freaking episodes. He, as we know, is Helios, Priest of Elysion, who watches over the dreams of Earth. But what we didn’t know is that the Dead Moon troupe members are “monsters born of the remnants of dreams discarded by people who forgot what it means to dream.” So, like the subheading says: Literally where dreams go to die.

Elysion had kept the Dead Moon sealed away for ages, but the seal weakened and they escaped to wreak havoc. Helios needs to activate the Golden Crystal (his horn) to seal them again, but he can’t do that until he finds the person who can wield the crystal. And meanwhile the Dead Moon’s threads are gonna keep stabbing the Earth and, by extension, Mamoru.

In happier news, Chibiusa finally gets to introduce her parents to her boyfriend!

“And if you say ONE WORD about his mane or hooves, Mom ‘n’ Dad, I SWEAR TO THE MOON…”

So I guess we need to go find this Golden Crystal wielde…oh, no, we’re just gonna drop Mamoru off at home and storm the big top? That…sorta seems like the exact thing Helios asked you NOT to do, but you know what, y’all are the world-saving experts, so I’m not gonna argue. Go Team Sailor!

After mowing through the remaining Dead Moon Lemures, the Moonies hop on the Big Top Elevator and chat about how they all saw Pegasus in their dreams when they were little. They eventually replaced him with their own dreams, which is kind of a neat way to represent a universal human trait that then becomes tailored to each individual based on their personality and experiences.

The older girls gently try to prepare Chibiusa for the eventuality that she and Helios will have to part ways, as they assure her that as long as they “hold on to their feelings, Pegasus stays with us forever.” The “pure” innocence of childhood may leave us, but just because we grow and change doesn’t mean we have to give up entirely on the things we held dear when we were little. That’s more-or-less what’s happening here, I think. 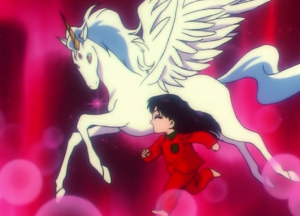 At the top of the big…top, they duke it out once more with the Amazoness Quartet, who’re all wielding souped-up Amazon Stones courtesy of Queen Nehelenia. Even so, they’re no match for Chibiusa and her magic cowbell, and it looks like the Quartet might even get Staged Out until Zirconia swoops in to protect them. Then, in a moment both tense and very silly, she calmly lines up her shot, swings, and hole-in-one pops out Chibiusa’s Dream Mirror. I know she’s the bad guy and all, but Zirconia is kiiiind of a boss.

Obviously Chibi’s Dream Mirror shines golden, and a pleased (but mostly relieved, given how hard Nehelenia’s been breathing down her neck as of late) Zirconia captures Chibiusa in a mirror and teleports her over to…

Episode 163 – The Bit and the Spurned

…Nehelenia, of course! Chibiusa comes face-to-face with Helios’s body as well as the dastardly queen herself. The queen gets to tell her side of the story this time, and it doesn’t quite line up with Helios’s. She describes a time when she lived alone on a small, dark planet, watching the lovely, lively Silver Millennium. When she found out about the Golden Crystal, she decided to use its power so she could rule the Moon Kingdom herself.

But things got complicated when she met the protector of the Golden Crystal (a man on earth who looks a whole lot like Helios) and immediately fell in love with him. She suggested they rule together, but the priest told her the Crystal could only be possessed by someone with “a beautiful dream.” If you were “evil,” it would punish you by setting you on fire. I think we all know how that one turned out.

Except… was Nehelenia evil, though? Or was she misguided and envious and desperately lonely, and then the priest set her on fire and Queen Serenity trapped her in a lightless mirror-world for thousands of years, and then her misguided and envious and lonely emotions slowly warped into pure, unadulterated malice? Between this and the Black Moon Clan, Sailor Moon is making a pretty compelling argument against totalitarian regimes, whether intentionally or no. (And given the somber art and music, I kinda feel like the anime staff agrees with me here.)

Regardless of personal sympathies about what happened to her, she is currently holding Helios hostage and trying to destroy the White Moon, which would mess with the earth’s tides somethin’ fierce, so Chibiusa’s right to fight her. Er, try to fight her. Mostly she just gets threadrocuted and passes out until… oh, goodness. The Amazoness Quartet get bored, decide they wanna meet Pegasus, and swap the real Chibs out for a fake one.

Meanwhile, Zirconia has been tasked with disposing of the Mooonies, and so like any proper villain she concocts a needlessly elaborate scheme where she gets them lost in a hall of mirrors and has them face that little voice in the back of their heads that wonders whether this fight is worth it.

MirrorMoonies attack them with their insecurities: Makoto worries about maintaining her “femininity” as a fighter; Minako feels taken advantage of because she’s fought so long without any thanks; Ami’s unsure she can balance her daily dreams with her crime-fighting ones; Rei fears she won’t be strong enough to survive every battle; and Usagi considers “forgetting everything” and going back to being an ordinary girl.

They also have NO respect for personal bubbles.

Most of this is a rehash of character beats we’ve touched on before, so it’s no surprise that the girls don’t struggle for very long with these fakes. Most importantly, Usagi acknowledges the carefree life she had before, but also that there’s value in the pain she feels now, because it speaks to the bonds between herself and the people she cares about. “I don’t regret who I am now,” she says, as the entire team moves slightly closer towards the responsible adults they’ve been becoming since the series began.

Much like last episode’s chat about Pegasus, they all declare they haven’t abandoned their childhood dreams, but that they have “a greater dream” to fight for now. Currently, that involves putting aside personal goals and busting their Chibi pal outta MirrorJail.

They destroy Zirc’s labyrinth, but can only watch through the original mirror helplessly as the Quartet drag out the Helios illusion and try to “play” with him. This involves first harnessing him and then trying to take the Golden Crystal for themselves. As we learned before, this plan is doomed to go up in flames.

And now the song is stuck in your head, too~ ♪

Chibiusa wakes up to find Helios trapped and in pain, so she will WALK! through the FIIIIRE! And let it…

…Do nothing, really. She releases Helios from his harness and they both escape just fine. The Quartet are VERY confused about this act of selflessness, and will continue to muse on it (particularly Jun-Jun, who always seemed the most empathetic of the gang) even after Zirconia puts them in time-out for stealing Nehelenia’s prisoner.

Meanwhile Nehelenia finds Chibiusa again and captures her once more, leaving everyone more-or-less where they were physically when the episode began, but in some pretty dramatically different places mentally. I don’t know for sure how this is all gonna play out, but I’m mighty interested to see it happen.