Shooting for the moon and landing among the… Mars?

Yes, it’s that time of season again: Time for our scouts to get there level up on and try out some cool new abilities (and animation) so they can help Usagi win the day against the newest Big Bad. I always enjoy these episodes, not just because they force the series to spend time with the other Moonies (although there is that, especially given the heavy Bunny focus of SuperS), but because they often feature nice morals about self-confidence, individuality, and friendship.

And then sometimes, wedged in there, you get an episode about Usagi and Chibiusa going to the dentist. But, hey, nobody bats .1000. And at least there was a hefty amount of silliness and fun scenes (such as the one in the screenshot above) to pad both episodes in enjoyable interactions. 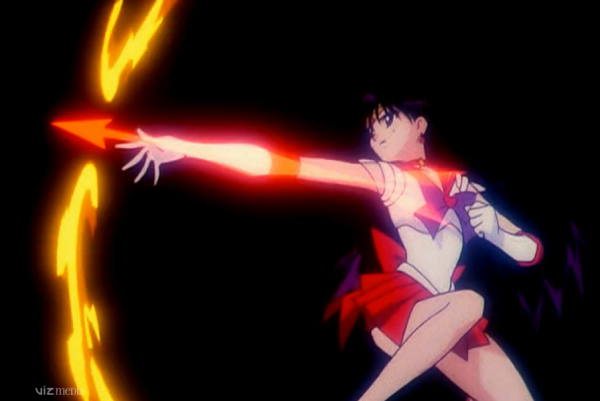 Rei has become the shrine maiden cover girl of Juuban, and the locals can’t get enough of her (love) charms. Business is booming, so much so that Zirconia’s Fly-By Eye Spy is hovering around the area, seeking out beautiful dreams. Enter Nanako, an enthusiastic kid who’s literally starry-eyed over Rei. She’s got it in her head that Rei is a refined, selfless, humble soul dedicated to making other people’s dreams come true, and she wants to be just like her.

Rei is both flattered by Nanako’s praise (her “Big Sister” attack is downright deadly) and respectful of Nanako’s dream to live her life as a shrine maiden, even if it isn’t a dream Rei shares with her (Rei, as we know, has her sights humbly set on world fame and true love). So she plays along in order to encourage Nanako to pursue her goals. And, I mean, if it can help her grandpa’s shrine make a few extra bucks along the way, bonus!

Things hit a snag, though, when the Bunnies approach Nanako and find out she idolizes Rei not because she personally wants to be a shrine maiden, but because she’s given up on any of her own dreams and has opted to mimic somebody else’s. When Rei finds out, she’s all:

And goes off about how Nanako is belittling shrine maidens. Nanako overhears her ranting to the Moonies and runs off in tears. This episode does a really good job of making this conflict understandable from both sides, as I’m sympathetic to Nanako’s fears, but ultimately siding with Rei in that Nanako shouldn’t let those fears rule her life. Plus, it really is pretty insulting to actual shrine maidens to see their job as some kind of “safety school” option.

Ves-Ves is pretty upset herself. Zirconia sent her here to Dreamcatch a wannabe shrine maiden, but when she shows up, Nanako insists she doesn’t have any dreams.

“I’d even take the one where you’re naked in math class! Throw me a frickin’ bone here, kid!”

When Nanako relents a little, Ves knocks out her Dream Mirror just as the Moonies arrive on the scene. She sends out Mane-Mane the Monkey Girl, the epitome of “monkey see, monkey do.” After some good old-fashioned Face Stealing, she swallows Nanako’s mirror and echoes her dreams to the world. And heeey, they’re just as ambitious as Rei’s!

When Rei hears this, she… Well, you know how Ami went on a metaphysical dream quest to find her inner warrior and unlock her hidden potential? Yeah, no, that shit takes WAY too much time. Instead, let’s just get SO ANGRY that we produce a badass fire bow WITH OUR MINDS. Rei gives a speech about how girls’ dreams are unlimited and how important it is to be yourself and walk your own path, and burns this mother down.

The Lemures is dead, Ves has retreated, and Nanako decides to trade in her hakama for a burger joint hat. Feels like a step down to me, but eh, everybody’s gotta start somewhere. And the important part is she’s doing what she wants, not copying somebody else.

Rei episodes tend to be pretty hit-or-miss for me, but this was a great one, just solid inspirational storytelling, and Rei’s straightforwardness and ambition make her the perfect character to tell it. Was it subtle? Oh, no, not even remotely. But I’m more than happy to sacrifice subtlety for positive messages in my YA fiction. Heck, even I’m feeling encouraged after this one! So thanks, Sailor Moon!

Episode 153 – The Whole Tooth and Nothing But the Tooth

Look up the word “filler” (HAH, dentist pun!) in the dictionary and a screenshot from this episode would sit right next to it. I always figured the dinosaur episode would win that award, but at least it had the WTF-ery of dinosaurs going for it. Tales about The Terrors of Dentistry are a dime a dozen, too, although I will say that I’ve ever seen an anime tackle it before. So maybe my western lens is making it seem less original than it is.

At any rate, the story is a simple one: Zirconia’s getting pressure from Queen Nehelenia, so she goes to the Quartet and finds Palla “Inky” Palla playing with her dolls. She is scatterbrained, childish, adorable, and terrifying.

“Well, you might feel a teensy twinge in your neck, but it’ll pass in a few seconds, just like you will, TEEHEEHEE ♪”

Zirconia talks her into playing a new game called “Check all the Dream Mirrors So the Queen Doesn’t Rip Off My Head,” and Palla agrees. She uses her Evanescence Orb to turn her toys into a real dentist’s office. Then she gives a bunch of neighborhood kids illusory toothaches, lures them to her cute office, and dream-murders the crap out of them.

Thanks to dessert overload and general hygiene laziness, Usagi and Chibiusa are two such neighborhood kids. They’re also terrified of the local, ancient dentist, so they get Mamoru to take them to this fancy-pants new office instead. Everything with Mamoru this week is ridiculous gold, by the way, from his increasing exasperation with his future family to his rehearsed “don’t be jelly, Usa, you know you’re the only girl for me!” speeches to his inevitable “fight” with Palla-Palla.

“Aaaand that’s it, I’m fresh out of fucks, I have no more to give.”

So, yeah: Palla tries to snag both Bunnies’s Dream Mirrors, but Tuxedo Mask interrupts her before she has the chance. The two “spar” while Palla’s Evil Dentist Lemures pins the now-transformed Moons to a wall and tries to drill the cavities straight out of their skulls.

All of which is to say the Moons have this monster RIGHT where they want her, because there’s nothing more formidable than a dentist drill… nothing but a SUPER ULTRASONIC TWO-PRONGED CRYBABY SHRIEK, THAT IS! Yes, the Moons bust out their little-used ultimate weapon, TIMES TWO, shattering their manacles, the decorative fish tanks, and everybody’s ear drums.

Then it’s all over but the… well, the crying already happened, so I guess it’s all over, then! Time to Stage these suckers Out and shatter Palla’s illusions, turning the dentist’s office back into a dollhouse and leaving Mamoru with a perpetual ringing in his ears. 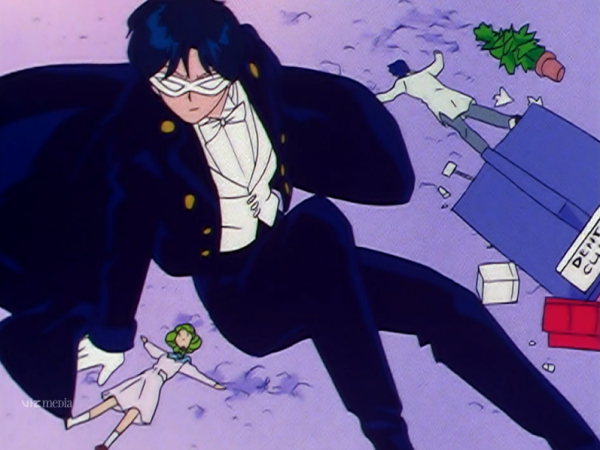 And that’s it. The Bunnies still end up having to go to the dentist, and Mamoru still gets dragged along to hold Usagi’s hand. It was mildly amusing, but nothing worth talking about beyond Palla being scary as hell and Mamoru being a big dork. So you can leave this one off your Essential Sailor Moon Watch List, and merrily we dance to the next one.