I’m back from paradise with a slight tan and many fond memories (KU winning! Watching the sun rise over a volcano! Seeing dolphins! Eating a burger with a bun made out of ramen noodles!), as well as a whole mess of Sailor Moon story to recap. We’ve entered the home stretch, and SuperS is once again a solid combination of character work, circus imagery, and coming-of-age themes.

…That said, my forehead IS rather red from some serious face-palming, because holy cowbell, are our scouts the worst detectives ever. This week is full of shocking!Reveals about our villains, who may be the least subtle enemies the team has ever faced, and it’s pretty (un?)intentionally hilarious. I’m starting to think the Moonies are doing it on purpose at this point, like Inigo Montoya fighting with his left hand. “If I use my right… over too quickly.”

At any rate, let’s enjoy both the giggles and the thoughtful “hmm” noises together.

Adulthood literally takes center stage when the Moonies get roped into helping Minako at her part-time “job” setting up the Juuban Civic Hall for the year’s coming-of-age ceremony. They’re skeptical about unpaid labor until they spot the hawt dudes, and then everyone’s all about the volunteer work! I appreciate that, even though this episode is largely about the Moonies moving towards maturity and adulthood, they still have multiple flashes of self-centered immaturity here, showing that it’s still a work in progress.

Speaking of self-centered immaturity, the Amazoness Quartet are on the scene as well, planning to attack all the ceremony-goers in one fell swoop. They show up early to scope out the joint and begrudgingly help with the preparation, complaining all the while—at least until the Moonies need their help hanging a banner, and the “work” swiftly turns into “fun.”

Part of our team’s charm is their willingness to believe in others, but it makes them pretty sad sleuths, as no one thinks anything of these girls’ circus backgrounds and inhuman jumping abilities except Luna, and even her suspicions vanish as soon as Artemis remarks that “Ehhh, they seem cool.” First-class gumshoes we got, right here.

The gals quickly become friends as they work together to finish the decorations, each team admiring the others’ various talents, but the mood goes from warm to chilly as soon as the Quartet finds out that a coming-of-age ceremony celebrates one’s entry into adulthood. They just can’t see why that would ever be something worthy of celebrating, although they still show up anyway, for mysteeeerious reeeeasons. 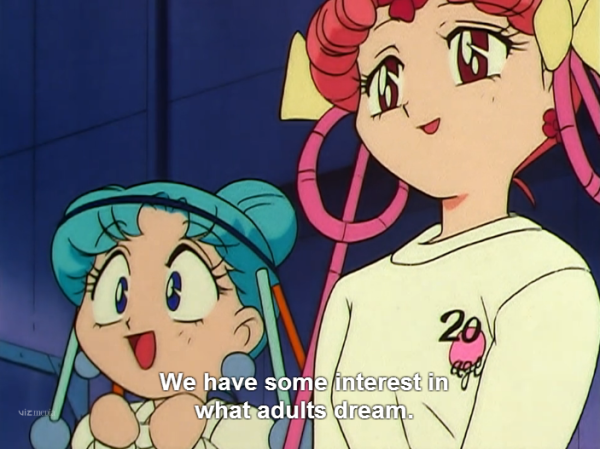 BUT WHAT EVER COULD THEY MEAN BY THAT.

During the opening acts, the Quartet quizzes each of the Moonies on if they want to become adults, and if so, why. Each gives an answer that showcases not only their distinct personalities, but the many differences between child- and adulthood, whether that involves marriage/families (Usagi), careers (Mina and Rei) or having the power and reach to work with and help others on a broader scale (Ami and Mako).

But the Quartet don’t get it, because all they can see is the lack of freedom that comes with these wishes. “Work” of any kind means listening to others, and the Quartet can’t see any value in that. Sailor Moon paints a somewhat idealized version of adulthood and a rather negative one of childhood here, but I think the central point about the difference between immaturity and maturity is a valid one. It’s not that kids can’t be altruistic or empathetic, but that they tend to be short-sighted about it, focusing on the people or events directly in front of them rather than any abstract or long-term benefits.

There’s also an interesting idea here that children and “good adult” dreams are fundamentally different due to the expansion of one’s world and the responsibilities (both practical and emotional) that so often entails. The Quartet think children’s dreams are the best ones, but Sailor Moon has shown us plenty of adult dreams that are just as “beautiful,” if not more so. I’ll be curious to see how this conflict plays out between our two sides in the coming weeks.

For now, though, it’s feedin’ time at the Lemures tank!

The Moonies arrive and take on the Quartet, who work better together than you’d expect, but a Lemures with a food baby combined with an assist from (and mockery of) The Tux allow our heroes to gain the upper hand and force the Quartet to retreat.

And HOW WEIRD, our four self-proclaimed circus friends are all gone too, ISN’T THAT SO WEIRD YOU GUYS. Surely not even the great Sherlock Holmes could solve this head-scratcher.

Queen Nehelenia’s only got six episodes left to cover the world in darkness, so it’s high time she stop relying on lackeys and take matters into her own scary clawed hands. She can’t leave her mirror because the light of our world extinguishes her “power of darkness,” but she CAN send through bunches of spider threads to create a temporary darkness that Team Zirconia can then use to help them find the Golden Mirror. Villainy continues to be exhausting. You gotta admire their perseverance, really.

These spider webs have some additional side effects: One, Mamoru keeps getting mini-stabbed by them (welp, guess we gotta reset the Days Since Mamoru Has Been Stabbed Counter); and two, Helios tries to peace out on Chibiusa so he can “fulfill his mission” and save their worlds. He needs to find the find the person who can release the power of the Golden Crystal (oo, oo, I bet her name has “Moon” in it!), and he doesn’t want to put Chibs in any more danger while he does this.

To which Chibs responds with MAXIMUM SAD ANIME EYES

and refuses to let him leave. It highlights Chibi’s own childish self-centeredness, and I imagine she will have to learn to say goodbye before this season is over. But for now, Helios is touched by how much she cares for him, so he opts to stick around and accept her offer to help him find his Chosen One.

With the world covered in spidery darkness, the Moonies have entered Serious Business Mode. Ami uses her tech to trace the evil energy to its source, which points them straight to… 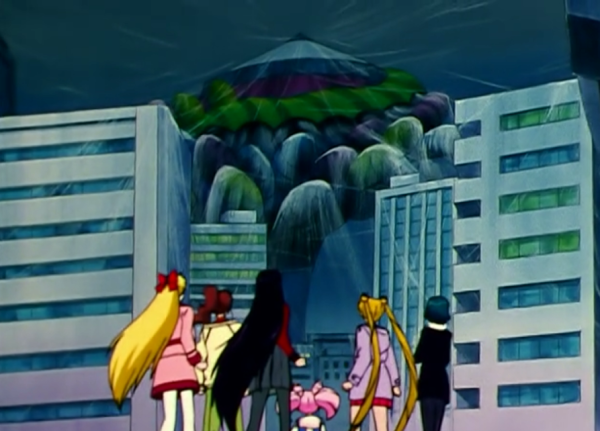 GASP! Who would have ever suspected all those circus monsters were coming from a circus?!

And along the way they run into the “disguised” Amazoness Quartet knocking out Dream Mirrors, too?! SHOCK AND CONSTERNATION. Usagi can’t believe they’re her enemy and tries to reason with them, but when they keep attacking Dream Mirrors she knows it’s time to go to work. The gals turn on their ’90s Battle Insert Song, transform right in front of the Quartet, and once again take them on with a little help from the ailing Tux.

Zirconia calls the Quartet back to base before they can settle this spat. Sailor Moon looks on in heroic confusion, still certain she can talk this one out with her new friends. This internal conflict would’ve worked a lot better if Sailor Moon had developed the Moonie/Quartet friendship over a few episodes instead of one, but that one episode did enough work in terms of showing how close they could be that I can buy it. Here’s to FEELINGS! saving the day once again.

Oh, and Helios is here in a burst of rainbow light, too.

ALL HAIL THE GLOW HORSE.

He tells them to not head for the Dead Moon Circus yet, and if we want to find out why, we’ll just have to tune in next week. You know, assuming Helios actually feels like TELLING us stuff for once. With five episodes to go, the odds seem pretty high, at least.