The mob acquaints a man with strange bedfellows. 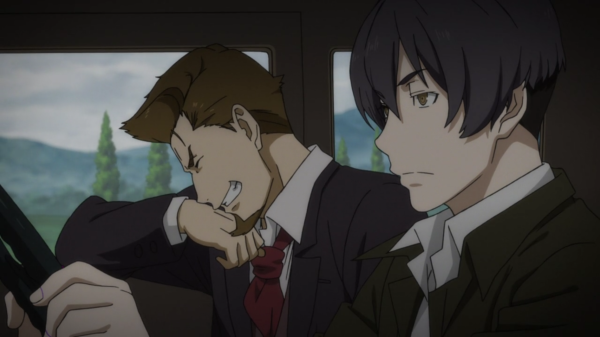 I know I joked last week that 91 Days was going to turn into a road trip buddy comedy, but. I mean. I didn’t think it actually would. Our tense gangster drama lightens up this week, taking time off from crime family intrigue to meander across the lakes region of the U.S. and flesh out its two central characters along the way–and by “flesh out,” I of course mean:”make them endearing as heck.” Those felonious scamps. 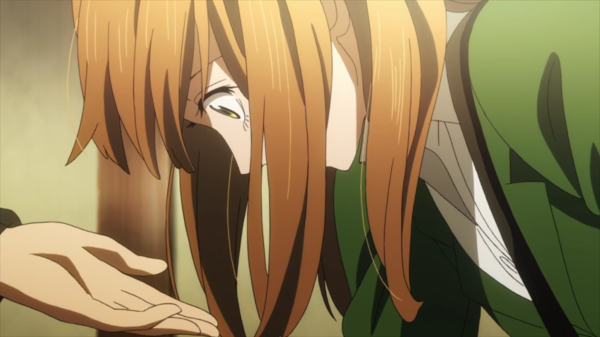 Friendships, romances, family ties–no two are the same, and they all take different kinds work. I’m not sure there’s ever a time when relationships get easy, but like anything else, experience does help. That’s why high school relationships can be such a muddled minefield, because for many people it’s the first time they’ve had to not only figure out How To Significant Other, but also how to balance different kinds of relationships in a healthy way. And boy, do Naho and Kakeru walk right into that minefield this week.

Shh—don’t tell anyone, but I may have dropped another 1500 words on the rakugo anime. Again. 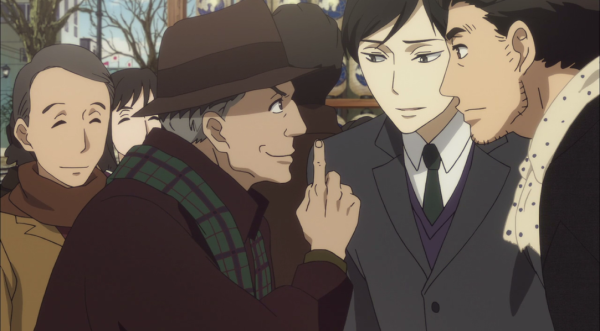 If the past two episodes were about building the bonds and demonstrating the importance of Kikuhiko’s makeshift rakugo family, then this one is about showing how those bonds could one day unravel. Yakumo’s story has always carried a strong undercurrent of longing and melancholy, but this is the first time we’ve really felt a creeping sense of dread, that we’re on the roller coaster ramp climbing to an inevitable fall. We’ve known it was coming since we got in line, but that’s not gonna make the drop any easier.

We’ve been heading toward this godly showdown since season one, so it’s no surprise that last week’s kidnapping(s) serve as the spark that finally sets the whole thing ablaze. Yato’s on the warpath, Yukine is right there with him, and Bishamon is only too happy to cash in that Revenge Card she’s been carrying for centuries. Too bad they’re all pointing their weapons at entirely the wrong person. 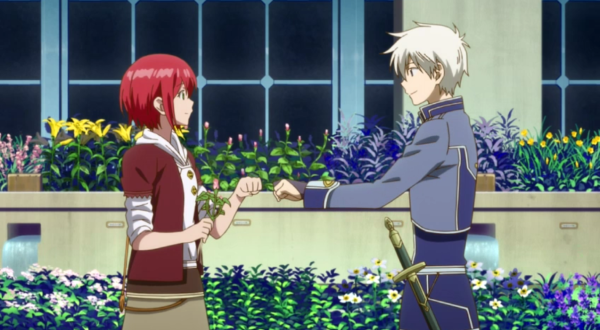 I was working on a short blurb for a compilation post and it ballooned into 500+ words, so I appear to have at least tentatively committed to blogging Snow White with the Red Hair this season, too. Surprise! Monday nights are a little hectic for me, but I’ll try to get these up within 24 hours of the original airing—Tuesday evening at the very latest. As always, I’ll let you know via Twitter if that ever changes.

Also as always, these posts assume you’ve seen the episode under discussion, so I’ll be mentioning specific plot points and character beats. Also, no manga spoilers in the comments, please! I’ve read a little bit but other readers haven’t, so let’s be courteous to them in our discussions. Thanks! Now hit the jump for lovely art and even lovelier people.

END_OF_DOCUMENT_TOKEN_TO_BE_REPLACED

Brown and grey and read all over. 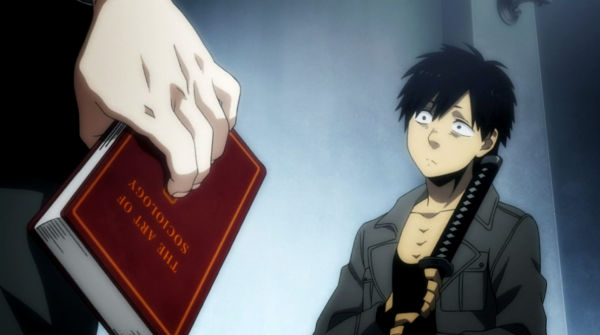 I keep wanting to talk to people about this show, so it looks like GANGSTA has made my episode blog schedule. FUNImation is still being delightfully unclear about its actual release date (their schedule says Sunday but the last two episodes have come out at various times on Wednesday), and since my mid-week schedule is already packed with My Love Story and Sailor Moon, I’m shooting for Saturday posts at this point. I’ll let you know via Twitter if that changes.

[EDIT: Thanks to some broadcasting delays, it looks like GANGSTA will in fact be a Sunday show from now on. Fingers crossed that doesn’t change again.]

For those just now coming in, I did a Premiere Post and a Rule of Three as well, so feel free to catch up on those before diving into this one. Also, as with all my episode posts, it’s assumed you’ve seen the episode under discussion. I haven’t read the manga, though, so there won’t be any spoilers for that, and I’d ask that commenters refrain from discussing anything in the manga (even “they left out X,” as they could work it in later) for the sake of both myself and other readers. Thanks! Now hit the jump for an Episode 4 rundown. END_OF_DOCUMENT_TOKEN_TO_BE_REPLACED The cast expands in a big way this time, although we’ve yet to see if those expansions were a one-time event or if we’ll see any of these characters again in the coming weeks. What this episode really does is give us a better picture of the world outside of our Trio of Ultimate Niceness, and it’s… well, not nearly as nice as they are. Although it does have 100% more afro, which is definitely a plus.

END_OF_DOCUMENT_TOKEN_TO_BE_REPLACED

The Josei Next Door
Blog at WordPress.com.