You’ll want to check your expectations at the door, but that should by no means stop you from coming in. 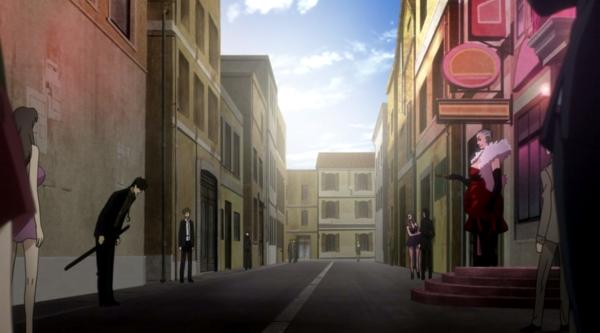 I did this one a disservice in my Panning post by comparing it to Black Lagoon and Jormungand, when really the only thing they share in common is an interest in the less-than-legal underworld and the personalities that live there. GANGSTA is also not going to be the next Michiko & Hatchin or Cowboy Bebop (although it’s probably closest in tone to that last one’s more somber episodes)—although I want to stress that that is in no way a knock against it.

GANGSTA is damn good and has the potential to be damn great, but it’s also its own thing, and a much quieter show than any of the shows you’ll be inclined to compare it to. The tone is less grandiosity and more… well, melancholy, I suppose. But then, in a city called “Ergastulum,” named for the Roman buildings used to imprison or punish slaves, I guess I shouldn’t have expected anything else.

Original author Kohske says she prefers Hollywood films to anime/manga, which is probably why this feels less like an anime (or at least a modern one) and more like a slow-simmering crime drama you might find on HBO. Director Murase Shukou (Witch Hunter Robin, Ergo Proxy) proves to be a good fit for her style, as he has a special flair for moody set pieces and pregnant silences, and he brings that to this series in droves.

GANGSTA‘S color palette is intentionally muted, all grays and browns, as if the city and its characters are perpetually coated in a thin layer of grime. It takes some getting used to but succeeds nicely in setting the series’ tone, as does the camera work, which tends to fluctuate between close-ups and long shots, creating a sense of both suffocating claustrophobia and emotional rifts between individuals. This is a story that takes place in back alleys where the sunlight never quite reaches, cramming together people who know almost nothing about each other, and it creates a natural tension you can feel in just about every scene.

If the production has a weakness then it’s the animation itself, which struggles with fluidity and depth particularly during its action sequences, though it’s hard to say if this is a limitation of the animation studio (Manglobe, who have a reputation for producing ambitious works that tank commercially) or a weakness of the episode directors. The first episode was almost noticeably clumsy in how bland the big fight scene felt, although this did improve with the second outing. The series is better at quiet moments and character beats, but I suspect action will take center stage fairly frequently, so here’s hoping it can improve as it goes. 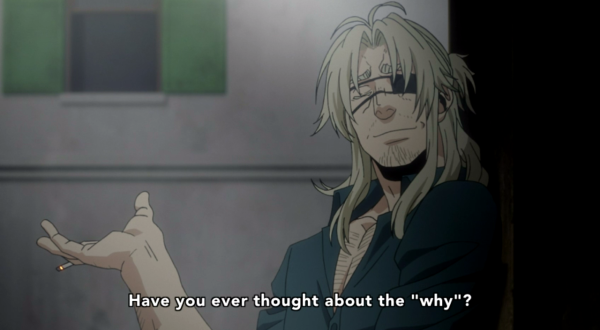 This is a huge part of GANGSTA‘s appeal, as is the narrative’s amoral stance (the characters have opinions and no doubt the audience will too, but there’s no overt approval or condemnation from the story itself yet)—as is, I admit it, the way it balances both the male and female gaze, and more often than not slants to the latter. Despite its grime and grit, this is a damn sexy anime, probably the sexiest since The Woman Called Fujiko Mine, and made all the sexier because the series treats its characters like people instead of objects.

And it’s those characters who form GANGSTA‘s greatest strength and pack it with so much future potential. They’re just so unique, fascinatingly different from the usual suspects not just in anime but in fiction in general. Worick is a one-eyed gunman and part-time gigolo running (both literally and psychologically) from a decades-old trauma. Alex is a former prostitute and relative newcomer to the city who reacts with realistic shock to the violence but ultimately proves herself steadfast and capable, as unwilling to be labeled a “victim” as either of the two male leads.

But it’s Nicholas who’s the clear stand-out of the cast, a katana-wielding badass and Actual Deaf Person who communicates mostly through sign language (although he can read lips and speak when needed, but it’s realistically slurred, and mad praise to voice actor Tsuda Kenjiro for that). The series writes both him and his interactions with others with tact and grace, as the characters react and adjust to his deafness with zero pity and little fuss; if anything, it’s implied that the onus is on them to learn sign language if they want to communicate more effectively with him. 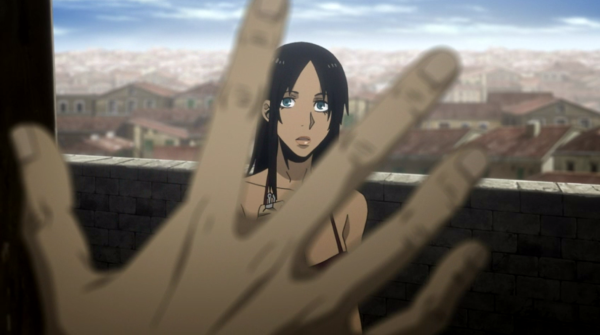 Above: The international hand gesture for hammer time.

So, yeah, in case you didn’t catch the glow coming off these paragraphs, I’m immensely pleased with the way this story is handling pretty much all of its elements. Despite a somewhat shaky start, it’s improved a little each week, culminating in a quietly provocative character study that proved the early glimmers of potential weren’t just a mirage. I may even blog this one weekly, once I figured out exactly when Funimation releases new episodes. Keep your eyes peeled for more with Nic ‘n’ the Gang, as there’s a real good chance you ain’t seen the last of ’em here yet.