I hope you brought your camping gear, ‘cause these episodes are IN TENTS. 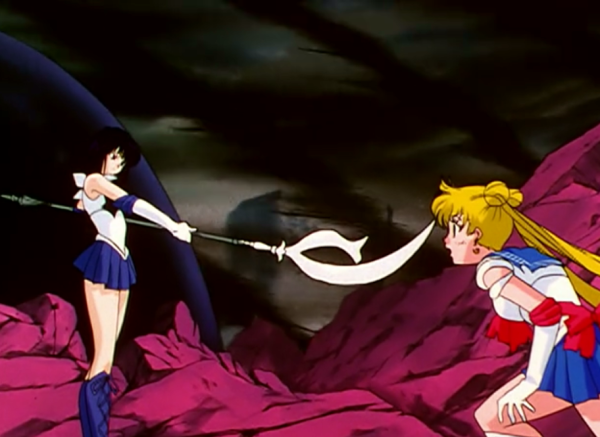 Wow, but this was a really good week for Sailor Moon. A slightly less good week for my emotions, but hey, when you’ve got two episodes stuffed with possessions, schemes, battles, “deaths,” tender reunions, redemptions, evil universes, and apocalyptic battles, it’s bound to be a bit trying on the ol’ FeelBox. (Only… don’t think too hard about the plot. Everything works great on a character- and engagement-level, but the sciency magic is mostly nonsense, a backdrop in front of which our protagonists can struggle. Just roll with it.)

This post is already long and I really shouldn’t be spending time on an opening topic, but it strikes me that this is the second time Sailor Moon has had a child-character “go dark” and grow into an evil adult, so I’ll real quickly say I find it to be a pretty nifty metaphor for childhood anxieties about turning into someone you don’t want to be (something of a precursor to Utena’s The Cowbell of Happiness, now that I think about it).

Adulthood isn’t inherently demonized here like it is in some series (after all, the scouts put on makeup, a physical symbol of adulthood, to gain the power they need to fight baddies), so I wouldn’t say that SM is contributing to the idealization of innocence or childhood. But the series is concerned with people growing into responsible, empathetic adults, and I think we’re seeing some of that ongoing theme with these “Evil Older Forms.”

See? Two paragraphs. I can be succinct when I wanna be! And speaking of not being succinct, onwards to:

Episode 124 – A Visit From the Goo Squad

The Prof would like to take this brief lull in the action to explain the rest of the plot to Mistress 9 (nope, too late, I’m committed to calling her) Dolly: The Messilence has to get the Holy Grail and place it in the…evil slow cooker?… where its dark light will shine on the Tau Star System and guide their leader, Pharaoh 90, to earth, and only THEN can they destroy everything and envelop the planet in Silence. Being a villain is exhausting, you guys.

And speaking of the Grail, the Moonies have arrived at Mugen U’s doorstep with the Grail tucked happily in Usagi’s brooch. Dolly’s not strong enough to take them all on at once yet, so she creates an energy barrier and sends out an army of Daimon GOOns to handle things.

The Moonies fight off the first couple waves, but just as they’re preparing to Sailor Teleport past the barrier, Dolly reaches her evil hand through and kidnaps Sailor Moon. Without Usagi to help them teleport, all the rest of our Moonies can do is hold the pass (tonight we dine in hell, etc.) with a barricade, preventing the GOOns from spilling out into the rest of the city.

And in case your nails weren’t already gnawed down to the nub, enter The Outsiders via helicopter, whose bird’s-eye view helps them find the barrier’s weak point, a gap so glaring it makes the Death Star’s self-destruct cranny look like the pinnacle of security systems.

Evil organizations have the worst architects.

But Dolly senses them, too, and sends out an army of GOOns to snag their helicopter and electro’splode it. Desperate times call for desperate measures, so Doctor Puu commits a major taboo by stopping time for everyone but herself and her companions, giving Sailor Duo time to flee the wreckage. As for Puu… er, let’s just say I look forward to seeing what her next regeneration looks like.

Uranus and Neptune make it through the Black ✩ Hole, so Dolly sends Professor Dad, a.k.a. “Daimon Germatoid,” to handle Sailor Duo while she goes to play Usagi like a fiddle. Haruka and Michiru have an awesome, bouncy battle with Germatoid, who abandons his human vessel to possess a bunch of creepy cloth people, until Pluto’s(!!) voice reminds them that they totally have magical talismans in their hearts. 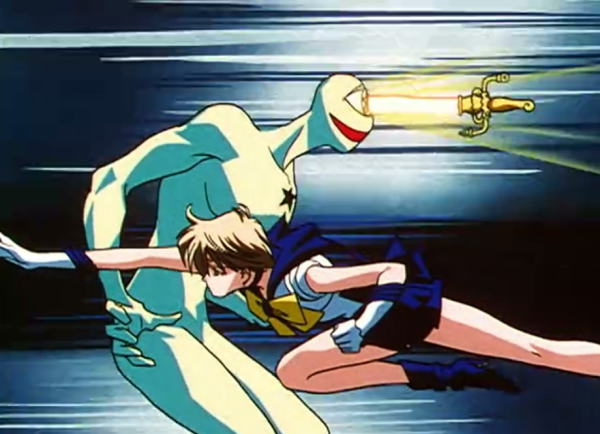 “I may have been a stubborn uncooperative punk the last 20-odd episodes, but hot DAMN, am I a badass.”

The Duo take down Germatoid, and PROFESSOR DAD WAKES UP AND TALKS ABOUT HOTARU, HE’S STILL ALIVE, HER DAD IS STILL ALIVE!

Wait, no, no no no no, it’s too early for him to be saved, THERE ARE STILL THREE EPISODES LEFT, Ikuhara’s brought him back only to murder him for realsies, HE’S DOOMED ISN’T HE.

I take a break from my roller coaster of emotion as the scene shifts over to the other possessed member of the Tomoe clan. Dolly makes like she’s Hotaru and tries to run a hilariously transparent con on Usagi, whereupon I spend several seconds groaning loudly about UGH, how dumb can Usagi BE, I mean who would EVER actually FALL for tha 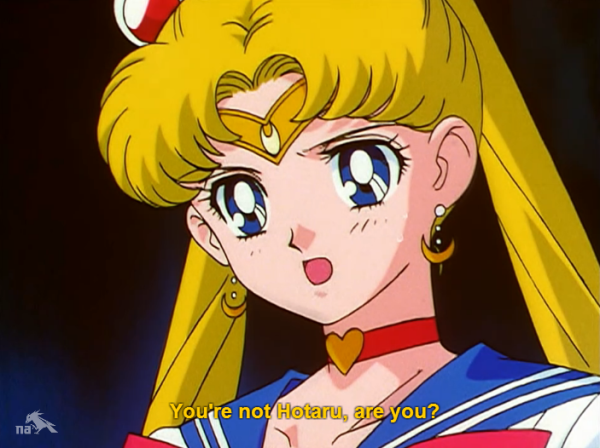 “I wasn’t awakened as a reincarnated Moon Princess yesterday, y’know.”

I stand corrected! The Duo show up just in time for Dolly to drop her facade and go all Evil Cackle up in here, and pulls back the curtain to reveal they’re right at the heart of the Undercraft. And that evil slow cooker(?) looks mighty hungry.

The Messilence is being a real Dolly Downer, as she informs us that Hotaru’s consciousness has officially “died.” I don’t believe her, though, and neither does Usagi, who jumps forward and takes the killing blast Sailor Duo immediately unleash on their enemy. Dolly thanks Sailor Moon for her kindness by pinning Haruka and Michiru to the legs of a giant statue and threatening to kill them if Usagi doesn’t hand over the Grail. 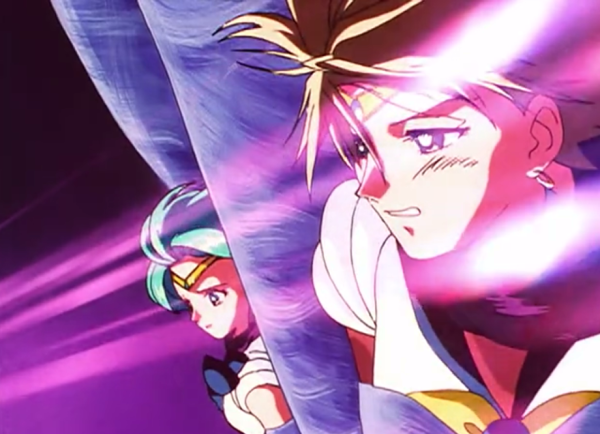 Enter a banged-up Professor Dad, and I hope your heart is prepared for the absolute bludgeoning it is about to receive from here to the end of the episode. He immediately recognizes Hotaru even in her evil grown-up form and apologizes for everything that’s happened to her. At first Dolly is all “EW, GROSS, FEELINGS,” but then Hotaru(!!) comes back from the dead, wresting control and releasing everyone from their binds. She implies that she needs the Holy Grail to defeat Dolly and… oh. Son of a Daimon. This is a trick, isn’t it?

It is, but Usagi doesn’t realize this until she’s already produced the Grail and handed it over. Then Dolly drops her act, transforms into Giant Dolly, and feeds the Grail to her home universe. 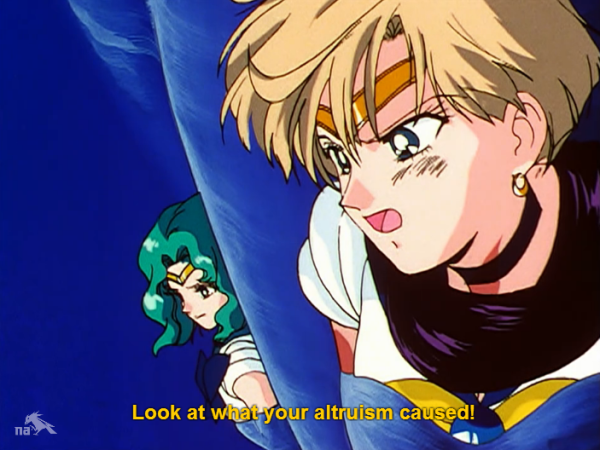 “Now this—this is the PERFECT time to say ‘I told you so’!”

The Grail shatters, absorbed by the mini-universe, which is rull bad news because (1) Usagi can’t use it to double-transform now, and (2) once the Grail’s assimilated, the only way to defeat the Pharaoh is to use a “superior pure crystal,” and where’re we ever gonna find one of those?

Speaking of the Pharaoh—here he comes now! We only get one quick glimpse at him, which is probably for the best, seeing as how he is CLEARLY an Elder God and anything more than a glimpse would send us all into the throes of madness.

Of course, then I screencapped it, so we’re all pretty much doomed. My bad!

Dolly is all ready to greet him but he’s a typically ungrateful tentacled being of pure evil energy (sorry, sorry—#NotAllTentacledBeingsOfPureEvilEnergy) and tries to kill her. Professor Dad protects her and Usagi protects them both. Better still, the blast seems to have cleaned Dolly out, as Hotaru is back in her regular form and already thinking about how she needs to save Chibiusa.

Poor Professor Dad has no earthly idea how to do that or really anything at this point, so all he can do is hold his daughter and remember all those happy times they had before they were both possessed by demonic spirits from alternate universes. And NO, I was NOT just emotionally destroyed by tragic father-daughter memories, SHUT UP.

As we all know, Feeling Power rules in the Mooniverse, and the touching moment gives Hotaru the strength to push Dolly out of her once and for all, shattering the black ✩ star tattoo and awakening her other form—as Sailor Saturn! YEAHHH BUDDY!

While Saturn phases over to Mamoru’s place and returns Chibiusa’s heart to her, the Undercraft collapses, The Silence continues its rage against the everything, and Haruka figures this would be a FABULOUS time to yell at Usagi again.

I mean, she just saved Hotaru from having her soul devoured, so yeah, probably?

Then Saturn returns to let everyone know she’s here to save their butts (YOU’RE WELCOME, HARUKA). She’s also here to say goodbye. See, her power is so great that unleashing it also destroys her body, so she can stop The Silence but Hotaru’s gonna die in the process. (Boooo! I take back my “Yeahhh buddy” from before!) She jumps into the swirling red vortex to duke it out with the Pharaoh in a battle SO BRUTAL it’s been left entirely up to your imagination.

And then things get REALLY intense.

Only Super Sailor Moon has the power to enter the vortex, so Usagi (and holy crap does Kotono Mitsuishi nail this scene) screams for her Crisis Makeup again and again. But without the Grail, there’s no way to make that happen… No way except the power of FEELINGS, that is!

The other guardians (even Sailor Duo!) lend Sailor Moon their power, and the combined energy is enough to allow for her Double Transformation. Then Usagi RIPS HER OWN HEART OUT OF HER CHEST and uses it as a “superior pure heart crystal” to JUMP INTO THE VORTEX, kick some ass (somuchass), and return with… 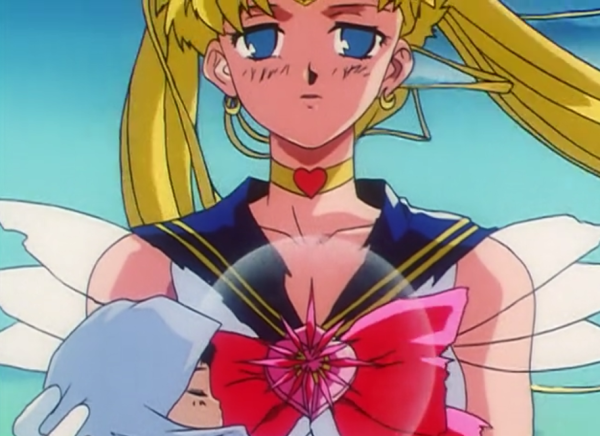 Well, Professor Dad was saying he wished he and Hotaru could go back to the good ol’ days. Looks like he might get that chance.