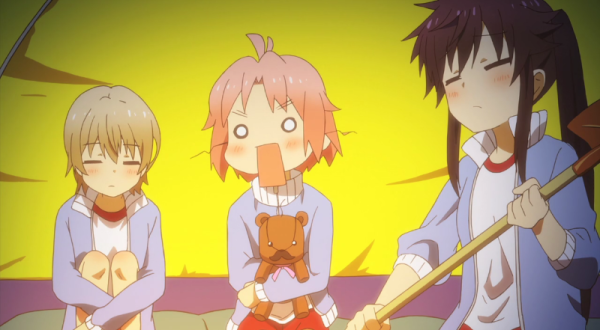 Normally I try to keep these posts free of major spoilers, but there’s no real way to discuss this show without mentioning The Reveal that happens at the end of the first episode. If you have no clue what I’m talking about and don’t want to have it spoiled for you, then go sit through the first episode (available on Crunchyroll) and come back. Otherwise hit the jump for a story I sure didn’t see coming.

As dull and rote as the first 20-odd minutes of SCHOOL-LIVE were, it pulled off its first-episode twist with panache, dropping enough hints to keep you on your toes before at last pulling back the curtain to reveal that our idyllic cute-girl story is anything but. Rather, our four main girls (and one young teacher?) are the last survivors in their school, holed up behind self-made barricades after a zombie outbreak tore through their city, leaving them stranded and isolated from the rest of the world.

Uncertain how far into the world the chaos extends, the girls struggle to survive by cultivating the school’s rooftop garden and making forays into the downstairs school store for supplies. In between tilling fields and killing zombies, they work through their individual traumas, relive the memories of the world before the outbreak, and hope that someone will find them soon.

All the girls, that is, except Yuki, who’s so deeply in denial that she exists entirely in a fantasy world, even crafting other imaginary students to talk to. To keep Yuki safe, her friends help her maintain the illusion, pretending they’re the “School Living Club” whose members voluntarily never leave the school. It’s this sharp rift between Yuki’s perspective and the rest of the world that forms the crux of SCHOOL-LIVE, as it generates tension and danger, leaves the audience uncertain and off-balance (I’m still not convinced their teacher friend actually exists), and dyes even the cutest of scenes in a strong shade of just-plain-creepy.

There’s some analyzing and metaphor-making here if you want to take the time to do it—maybe SCHOOL-LIVE is a cynical look at the willful ignorance or forced innocence some cling to during adolescence, or even a critique of the cute-girl genre itself—and I wouldn’t mind at all if the series decided to push on that in any direction at some point. Honestly, though, I’m mostly still here because SCHOOL-LIVE is very good at unnerving its audience in a way that’s difficult to do and even harder to maintain, and it’s fascinating to watch. I’m both taking notes and waiting to see if it can keep it up over an entire cour.

I didn’t really expect this one to stay on my watch list, and at this point it’s still very much a touch-and-go, episode-to-episode kind of situation. But if it can keep developing its cast and (most importantly) maintaining that tone of off-kilter tension and wrongness, I could see this shaping up to be an unexpectedly creepy little horror story.