Brown and grey and read all over.

I keep wanting to talk to people about this show, so it looks like GANGSTA has made my episode blog schedule. FUNImation is still being delightfully unclear about its actual release date (their schedule says Sunday but the last two episodes have come out at various times on Wednesday), and since my mid-week schedule is already packed with My Love Story and Sailor Moon, I’m shooting for Saturday posts at this point. I’ll let you know via Twitter if that changes.

[EDIT: Thanks to some broadcasting delays, it looks like GANGSTA will in fact be a Sunday show from now on. Fingers crossed that doesn’t change again.]

For those just now coming in, I did a Premiere Post and a Rule of Three as well, so feel free to catch up on those before diving into this one. Also, as with all my episode posts, it’s assumed you’ve seen the episode under discussion. I haven’t read the manga, though, so there won’t be any spoilers for that, and I’d ask that commenters refrain from discussing anything in the manga (even “they left out X,” as they could work it in later) for the sake of both myself and other readers. Thanks! Now hit the jump for an Episode 4 rundown.

Like last week, GANGSTA settles into a back-and-forth rhythm between past and present story arcs, which gives the modern-day action extra weight and serves to keep the story moving snappily between multiple plot lines. It also allows the titles to have nifty little double-meanings, as the “noncomformist” could either refer to The Handyman Formerly Known As Wallace or the young Tagged assailant ignoring the “Three Laws” enforced in Ergastulum. 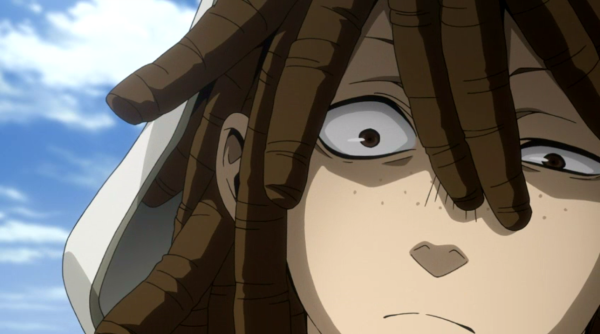 Go on, ask him how many damns he gives. The answer will NOT surprise you.

Speaking of those three laws, this episode dropped a lot of casual references and details without bothering to explain every single one of them. Personally I enjoy that kind of storytelling—I like getting thrown into a world and figuring out its rules as I go—but I can see it being a little overwhelming. So before we get into character analysis and potential thematic chatter, I figured it wouldn’t hurt to do a run down on pertinent plot details first. So, here’s what we learned this week:

Everybody got all that? Awesome. 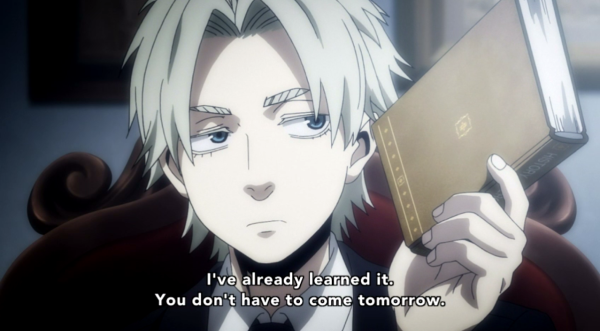 Well SORRY, Wally, but some of us AREN’T superhuman and we need bullet points to help us get through our classes.

So. Plot points and world-building aside, what are we really dealing with here? As is expected from an episode with one foot in the present and one in the past (and a character who can remember all of it with perfect clarity), there’s an underlying theme here about growth and change—and, because of the unspoken but ever-present acknowledgement of Nic’s own shortened life span, death.

Chad (a cop who is getting too old for this shit) has known and worked with Worick and Nic since they were seventeen, and he’s not quite sure if either of them has actually changed. Worick, too, teases Nic about how he looks the same as his old arrest photo. Really, the whole series thus far has presented our two leads as drifters, cycling through jobs (and secretaries, apparently) more as a way to kill time than with any active goals in mind.

It’s unsurprising that the equally directionless Alex is drawn to them, nor that all three appear to be hiding from their own demons: Worick from his family, Alex from old traumas and abuses, and it’s suggested that Nic sticks to back alleys in order to stay out of someone‘s sight, although it’s unclear who just yet. I’m not sure where all of this is going yet, but it’s definitely there, so it’s worth mentioning now so we can come back to it as needed. 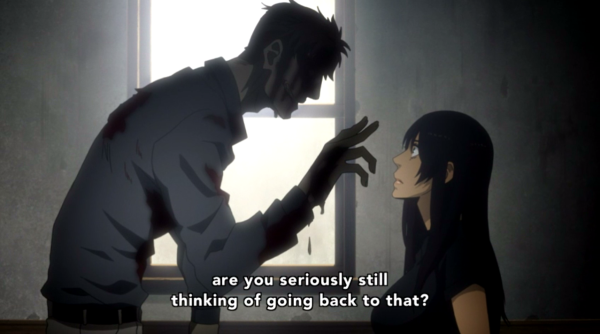 Much like Odysseus, Alex is caught between a rock and the bloody taunting memory of her abusive former pimp.

Although really, the best thing about this episode was watching “Wallace” gradually lay the groundwork for his friendship with Nic. He’s an angry kid who’s smart enough to know his family situation and (judging by his clenched fists) figure out that Nic is a Twilight, but he’s still quite sheltered, unprepared for either Nic’s deafness or his casual familiarity. At this point it strikes me as more fascination than genuine affection, a relationship built on loneliness and a desire for human contact (particularly from someone his own age). Watching that gradually become the relaxed, trusting bond they have now is going to be a treat, as will the emotional impact it has on present timeline events. 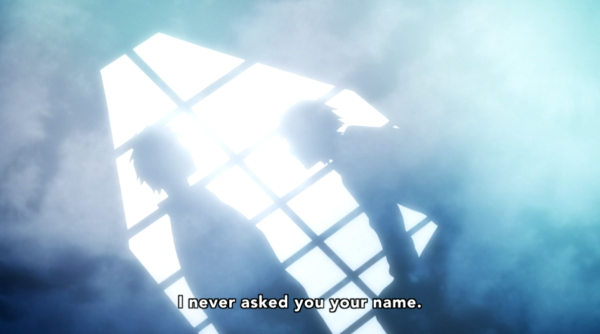 “But seeing as how we’re gonna be partners for the next, like, 20 years, now seems as good a time as any.”

I suppose I should mention the new Tagged (another top-tier “A/0,” like Nic), but really, we’ll have time to discuss that next week, and I find the character stuff 100 times more interesting than any of the crime drama. Part of this is certainly due to the animation – at this point I think it’s fair to say it’s never going to be all that fluid or stylized and I’m just going to have to deal with that. Same with the music, which you don’t realize is repetitive and lackluster until you do, and then you cannot stop realizing it. (Sorry. I just ruined the music for someone, didn’t I?)

That said, I do continue to like the direction in this series, as it refuses to glorify or romanticize violence, and often even pulls us away from the big bloody action shot to focus on individual reactions instead. Skewed angles help to show how broken Wallace’s world and his personal prejudices about Nic are, and the script juggles its dual story lines clearly and smoothly. There are some definite production issues, don’t get me wrong, and a part of me will always be a little sad that we’re not getting the perfect GANGSTA experience. But with this much meat to chew on, I don’t particularly mind if the side dishes are a little bland.