Ringing in the new year with a loving look back at the old.

This was my kinda year, both in terms of the types of shows and the way they were executed. Lots of bleeding cool action, entertaining fantasy, charming shoujo, and some ambitious projects from both up-and-coming and seasoned directors/writers made the year not just a fun one, but at times downright stunning.

While there were still plenty of bad or just forgettable titles floating around this year, the industry as a whole seems a lot more financially comfortable than it used to be (thanks in part to international simulcasts), which has led to studios not only releasing more titles, but taking greater risks with some of them, too. Not to say that niche passion projects like Maria the Virgin Witch or animation-fests like One Punch Man would never have seen the light of day in past seasons, but with greater economic stability, big-name studios like Production I.G. and Madhouse (and my darling BONES, who would have positively dominated this list if I’d allowed split-cours) can produce these titles with a little less reticence than they might have in the past. And that’s always a good thing.

Beyond that, two things really stand out after putting this list together: First, that the year was front-loaded like nobody’s business, as half these titles aired during the winter; and two, that it featured a lot of smart, character-driven series, and some particularly well-written female protagonists, which is a huge bonus for me. All-in-all I had me a very good 2015, and am excited to talk about some of its standouts.

Because of the way anime broadcast schedules work (with shows carrying over from one year to the next, and some series getting greenlit for second seasons), I created some eligibility guidelines:

The general rule is that a show needs to have a complete season under its belt to be eligible. This includes longer-running shows that finished in 2015 (like SHIROBAKO) as well as sequels (like Noragami Aragoto or Gatchaman Crowds insight), but eliminates ongoing series (like Mr. Osomatsu) and split-cours (like Concrete Revolutio or Snow White with the Red Hair). These shows will be eligible for the 2016 “best of” list instead.

Oh—and I’m not going to bother grading these like I do for my seasonal reviews. It’s the Top 10 of the year, so it’s safe to assume they’re all good-to-great series, and any would make a welcome addition to your watch list.

Make sense? Bully! Then let’s get to it, starting from the bottom and working our way up to the best of the year.

Available on: Tokyo Ghoul is on Funimation (U.S./Canada) & SCHOOL-LIVE is on Crunchyroll
Episode Count: 24 (Tokyo Ghoul) & 12 (SCHOOL-LIVE)
Tokyo Ghoul In a Sentence: College student Kaneki Ken finds himself pulled into the world of ghouls: powerful humanoid creatures who feast on human flesh.
SCHOOL-LIVE In a Sentence: Carefree student Yuki loves hanging out with her friends at school and especially in the School Living Club, but does something seems a little… post-apocalyptic, here…?
Content Warning: Violence (some graphic); fanservice

Neither of these shows was consistent enough to make the Top 10 itself—Tokyo Ghoul was a tonal and narrative roller coaster, and SCHOOL-LIVE sometimes got lost in cliche cute-girl shenanigans—but when they were firing on all cylinders, both were Top 5 material, so I wanted to make sure they got a little love here at least.

Despite the bumpy ride, Tokyo Ghoul had bursts of piercing character development and emotional resonance and finished with a gut-punch masterpiece of a finale, easily the best anime episode of the year. And, occasional mistimed fanservice aside, SCHOOL-LIVE handled its central ideas about trauma, adulthood, and the values and dangers of escapism with a sympathetic and balanced touch. True to their genre, both also featured some genuinely unsettling moments, using off-kilter cameras and a combination of the shown and hidden to build great tension. They weren’t always good, but they were great when it mattered, and that goes a long way in my book.

I wrote a spoiler-filled Tokyo Ghoul retrospective and a spoiler-free SCHOOL-LIVE series review that you can read for more.

Usually with lists like these my top 9 are locked and my 10th spot is a mess of competing titles, so more often than not I just give the nudge to the show I enjoyed the most—i.e., the one I’d most likely watch again or sit down and show to my friends. While there are other titles that may be more deserving of this spot (SNAFU 2 certainly comes to mind), when all was said and done, the one I personally wanted to have on this list was, indeed, Dance with Devils.

I’m a sucker for a silly supernatural “drama” and an even bigger sucker for musicals. Put ’em together and you’ve found my guiltiest of pleasures. DwD gleefully goes all-in with its premise, tackling everything with a straight face and its tongue firmly in its cheek. No show made me laugh harder than this one did, from its musical numbers to its “bad boy” antics to its demonic Pomeranians. It also develops a fun, twisty plot along the way, and a protagonist who gets sick of being an objectified Macguffin, leading to a finale that had me cheering out loud. Sure, it’s silly escapism. But sometimes that’s just what I need.

I attempted to explain my love for this one in a spoilerrific essay. You are more than welcome to read it.

Available on: Crunchyroll (worldwide except Asia)
Episode Count: 13
In a Sentence: Euphonium player Kumiko and her new classmates join their high school’s (not very good) concert band club, where the arrival of new instructor Taki might just give them all a renewed sense of direction.

Balancing soft-focus nostalgia with frustrating realism, Euphonium tells the story of high school band mates trying to figure what kind of individuals and group they want to be. It’s a familiar story made exceptional by its character work and attention to detail. Lushly animated and closely directed, Euphonium is adept at showing how small, even trivial details can seem so much more significant from an individual perspective, zeroing in on a tuck of hair or a bead of sweat to the point where you can almost feel it yourself.

While the first half meanders a bit (fittingly so, given its directionless protagonist), a tighter focus in the second half and the intense, intimate relationship between the two female leads pushes it towards stronger conflicts and a triumphant finale. I’m honestly sad they announced a Season Two, because this finale is perfection, and they’ll be hard-pressed to improve upon it from here.

You can read my season review for more.

Available on: Funimation (U.S./Canada)
Episode Count: 12 + a clip show (“Episode 10.5”)
In a Sentence: After a strange being grants him the power of the “all-seeing God Eyes,” Leonardo Watch takes up residence in the NYC borough of “Hellsalem’s Lot,” where an alternate world has come to overlap with our own and creatures and powers of all shapes and sizes mingle with the mundane.
Content Warning: Violence both cartoonish and graphic; mild nudity

BBB is a big bombastic blast, a battle bombardment bonanza of beautiful bedlam b—okay, okay, I’ll stop. Point is, BBB is a whole lot of fun, using larger-than-life animation and characters to craft a world both strange and familiar, balancing Lovecraftian elder-god weirdness with blazing fight scenes with surprising beats of human connection and familial ties. Director Matsumoto Rie has a unique aesthetic and sense of style, using angles and motion to build imagery and develop ideas, and make things look damn cool, too.

The explosive finale was a little too busy (read: incoherent) to resonate as much as I think it wanted to, but the series still managed to do a lot between its episodic stories and overarching conflict to explore human perception and grief, and to show how the strength of personal bonds and individual fortitude can hold back the chaos of the quite literal unknown (even if they can’t defeat it entirely). Like Noragami, it’s the kind of show with a great foundation that would only be improved by more episodes. Given the commercial success it’s had, the odds of that happening ain’t too shabby.

Available on: Crunchyroll (here’s the link to the full list of regions)
Episode Count: 24
In a Sentence: Hulking but kindhearted Gouda Takeo falls head-over-heels for Yamato Rinko (and she for him), but, convinced she only has eyes for his handsome best friend, he vows to help her find happiness with the guy she “really” likes.
Content Warning: Some of the stories deal with victim-blaming and body-shaming, but it’s a light touch, and handled with restraint and sympathy

Adorable, funny, deceptively smart, and as warm-hearted as its three protagonists, My Love Story set the bar for romantic comedies and then proceeded to break its own records. I spent half the year blogging this series, squeeing about its cuteness, pushing it to be better, and praising its constant subversion of rom-com tropes. This is a “how to” for healthy relationships, a story about communication and kindness and self-worth, willing to dig into difficult emotions but always meeting its challenges with sympathy and optimism.

Despite some early hiccups, OreMono found its identity in the second half and built to a sequence of wonderful (sometimes powerful) story arcs, culminating in a satisfying finale that nevertheless leaves the door open for more. As much as I love these characters, I’d be happy to come back if they ever invited me.

In addition to all those episode posts, you can also read both my nice long essay about Suna and ace representation as well as my series review for more.

6. Yona of the Dawn (Akatsuki no Yona) 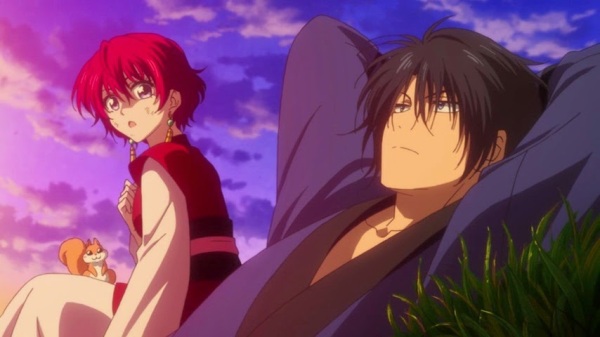 Streaming on: Crunchyroll (worldwide with the exception of Asia); Funimation (U.S./Canada) (listed as “Yona of the Dawn”)
Episode Count: 24
In a Sentence: Yona, pampered princess of the Kouka Kingdom, is forced to flee the palace after a coup disrupts her sixteenth birthday.
Content Warning: Violence (against adults/teens); some implied sexual content, including an arc that deals (sympathetically) with sex trafficking

A Korea-inspired shoujo fantasy settled comfortably between the “collect the handsome boys of legend” conceit of Fushigi Yugi and the “political war and intrigue” of The Twelve Kingdoms, Yona may not have reinvented the wheel, but it built a mighty good-looking and consistent one. With a measured pace and focus on character arcs, Yona developed its titular female protagonist with realistic but inspiring progress, following her growth as a warrior but, more importantly, as an empathetic and driven leader.

I gave this one the top spot in a stellar Winter season, and while it’s slipped behind some of those titles on this year-end list largely because of the sad lack of a season two announcement (although Shojo Beat’s recent manga license eases the sting a bit), it’s still a great epic fantasy that handles its story and characters with a steady hand and a lot of love. Also, Ao the Squirrel. That right there gives Yona more than enough reason to be on the list.

You can read my series review for more.