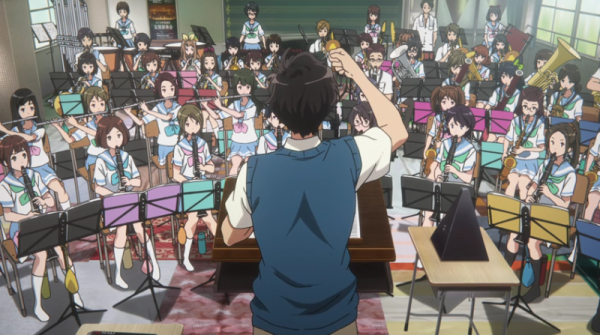 Sound! Euphonium is the story of a high school concert band trying to figure out who it wants to be. Are its members content to hang out for a couple hours after class, making friends and fooling around? Or are they willing to set and work towards goals, to find something they want and go after it with everything they have?

New conductor and band teacher Taki poses this question to the group in the second episode, but it’s really the question for the story’s protagonist, the seemingly apathetic and directionless freshman Oumae Kumiko. A euphonium player all through middle school, she begins high school uncertain if she’ll even join the band, and when she does, she shies away from her old instrument. Kumiko spends the first half of the series struggling to commit, to figure out if she wants to be a euphonium player or someone who just happens to play the euphonium. If she, like Reina, the trumpet player with whom she develops an increasingly intimate relationship, wants to be “special” or not.

And this, in essence, is the story at the heart of all the characters and conflicts: What is the band to you personally, what are your goals as a member of it, and what are you willing to do in order to achieve those goals? In many ways Euphonium reminds me of Ping Pong in its focus (although not its tone), as both are shows interested in that moment in adolescence when we start to think seriously not just about what we’re doing but about why we’re doing it.

Not everyone arrives at the same place. Some quit to pursue other interests, some focus more on the group than their individual performances (or vice versa), and some learn the difficult lesson that hard work doesn’t always lead to success. But they take similar paths to get there, and Euphonium handles them all with sensitivity, intelligence, and a fair amount of grace. 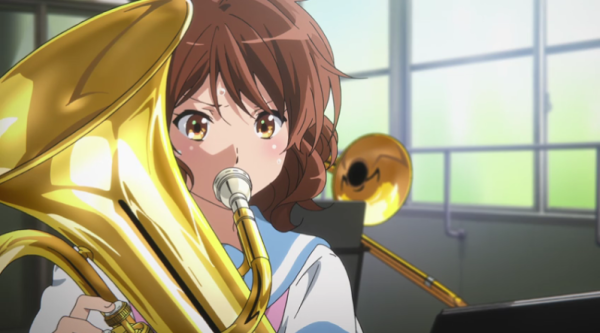 Euphonium nails the feeling of being a part of a concert band (or really, any group activity), handling issues both social and personal and never shying away from monotonous realism, often devoting large portions of its episodes to Kumiko and her friends struggling through long, repetitive practice sessions. Yet Eupho is never dreary, but instead pensive and wistful, its instruments forever shining and its characters frequently bathed in golden sunsets and lengthening shadows meant to evoke dreamlike nostalgia. It’s a high school memory, but a fairly honest one, focusing as much on the moments of frustration or failure as it does the bursts of joy, human connection, and success.

While the background and instrument art is lovely, where KyoAni really shines is in the character motions and expressions. Euphonium is a story that trusts its audience to read physical cues and subtext, and a tremendous amount of information is conveyed through pointed looks, hand gestures, and even tiny shifts in posture.

It’s a deeply physical, almost sensual story, and image blends with sound to the point where you can practically feel the brass in your hands, the bouncy ponytails at your back, and the sweat dripping off your chin. Credit the animation team for putting so much time into making everything dynamic and natural, and credit to director Ishihara Tatsuya (Clannad, The Melancholy of Haruhi Suzumiya) for knowing how to portray a character through their movements as well as their words. 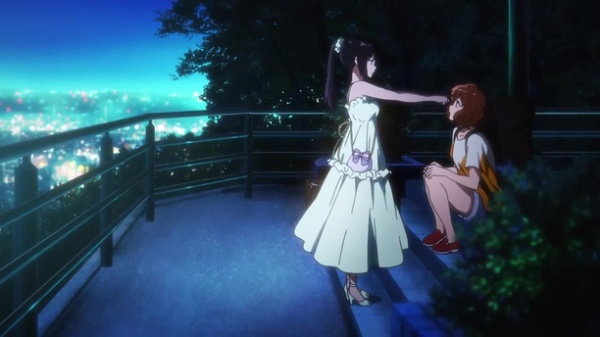 Euphonium struggles in its middle episodes as it falls into KyoAni patterns of semi-aimless cute girl shenanigans, losing focus and momentum in the process, but it kicks back into overdrive beginning with the hypnotic Episode 8, a festival story that builds to a frank, intimate, and gorgeous scene between Kumiko and Reina, as the two come to better understand one another and realize they have far more in common than they once thought.

The renewed focus on Kumiko and Reina gives the series (and Kumiko herself) much clearer direction in its third act, as conflicts carry real weight and character interactions crackle with tension both explicit and implied. It also doesn’t hurt that Kumiko and Reina’s own relationship is downright electric, charging all of their scenes with an intensity as sensual as everything else in this lushly drawn series.

Euphonium is on its A-game from pretty much there to the end, rarely skipping a beat as it propels its story, characters, and adolescent themes through conflicts, confessions, and eventually the competition itself, an extended performance that dominates the final episode and leads the story to its conclusion.

And yes, I’m sticking with that word: “conclusion.” A lot of people suspect we’ll be getting a season two or a film somewhere down the road, and we might. But, personally, I hope we don’t. I’m happy with this ending, as I think it wraps up Kumiko’s (and the band’s) central character arc(s) without feeling the need to tie a neat bow on everything. High school and band (and romantic) life will go on for these kids, with all the highs and lows that entails, and that’s as it should be. The piece goes on but the movement has come to a close. A few stuttered notes aside, it proved to be a memorable one.