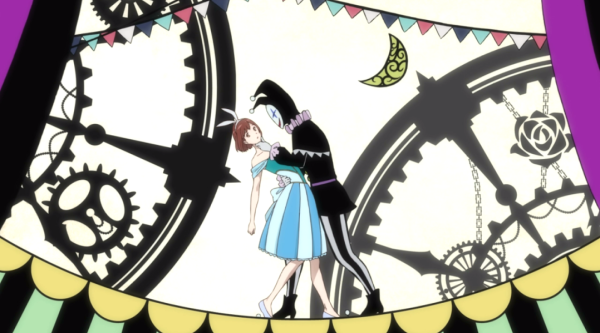 Speaking in the broadest of terms, fiction can serve two primary functions: As a way to reflect reality, or as a way to escape it. Some people describe this as “art” versus “entertainment,” which never quite sat right with me because it suggests a certain lack of value to the latter, which is (to use a fancy lit-crit term) silly. Escapism absolutely has value. Have you lived in the world? Reality is stressful and messy. While it’s a bad idea to flee it altogether, it’s perfectly healthy, even necessary, to take a break from it sometimes.

Escapist fiction can supply that, and the really good kind can do even more. It can inspire and motivate us, give us a boost of energy by showing us people who beat the odds, save the world, defeat the Big Bad, and ride off into the sunset with their friends and/or lovers at their sides. It may not show us reality as it is, but it can give us reality as we want it to be, and encourage us to strive towards that ourselves.

Sometimes escapist fiction serves another purpose: It gives us a safe space to fantasize about events and actions we would normally never take part in. This might be something like slaying a dragon or toppling a corrupt government, or it could be something more personal, like engaging in a dangerous or unhealthy relationship. “Bodice-ripper” romance novels play on these predatory fantasies, and while I’ve never personally found them appealing, I’ve come to understand why others might enjoy it, as it gives the reader a kind of control—a power—over a situation where in real life they would have none. 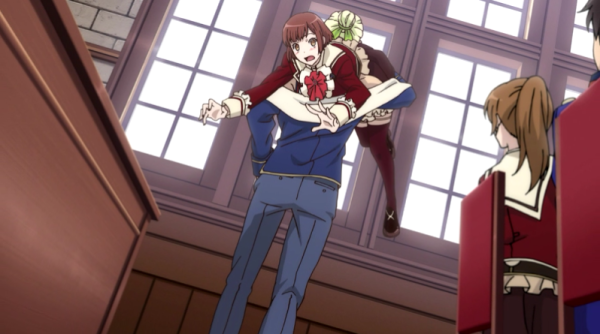 “Getting swept off my feet sounded so much more romantic in the novels!”

The danger of these fantasies is when they’re played not as a flight of fancy but as a desirable reality; when the behavior of the love interests in stories like Twilight or 50 Shades of Grey is considered a real-life romantic ideal instead of a capricious daydream. It’s the main reason predatory “romances” tend to receive as much criticism as they do, and why I tend to come down pretty hard on them myself.

Caution: Here there be spoilers. I can’t talk about this one without discussing the finale, so don’t scroll past that tweet unless you’ve seen the whole series or are willing to know how it ends. For what it’s worth, DwD is more about the journey (and the MUSIC!) than the destination, so I don’t think it’ll decrease your enjoyment much, but I wanted to give you a heads-up first.

Protagonist sings her normalcy to the world, where has this show been all my life #DancewithDevils pic.twitter.com/Gq91vxpckq

One of the tricks of Dance with Devils is how it begins by looking very much like Every Other Supernatural Harem Series, particularly regarding its protagonist’s personality—or rather, the lack thereof. Like most heroines in harem stories (be they dating sims or otherwise), Ritsuka functions as a loosely characterized stand-in for the audience member. In the early going, she’s ill-defined, blank-faced, and passive, getting bounced from one boy or danger to the next and largely relying on others (including a female best friend, for what that’s worth) to save her.

She is also, we come to find out, pursued by all these hot dudes because she’s carrying the world-changing power of a fabled Grimoire within herself. She is literally an object they are trying to obtain, and with the exception of Rem and Lindo—the only two who ever really care for her as a person, and (importantly) the only two she ever cares for in return—no one sees her as anything but a prize to be won and wielded.

Then, around the halfway point, something interesting starts to happen: Ritsuka becomes aware of her own objectification and is sickened by it.

Suddenly she starts to develop a greater range of expression and agency. She gets startled, angry, cries. She makes decisions on her own without asking for anyone else’s help. She exhibits foolish bravery and willingly walks into danger in order to rescue her mother.

In fact, nearly all of Ritsuka’s decisions are influenced by family and friends. She wants to find her mother. She wants to avenge Azuna. She wants to help her “brother.” Despite all the inhuman suitors swirling around her, her life remains refreshingly uninfluenced by romantic goals. That she falls in love along the way is something of an accident, and almost a footnote to the finale. It’s a part of the fantasy, but not the be-all, end-all of it.

Don’t get me wrong: Ritsuka is not a well of depth or nuanced character growth, and in the end she still very much functions as an audience stand-in. But the fact that she takes risks, fights for her agency, gets sick of people jerking her around like a doll, and eyes the predatory boys around her with a hefty amount of suspicion and disgust says a lot about the kind of audience Dance with Devils is trying to attract.

Right from the opening number, it’s clear Dance with Devils doesn’t exist in anything remotely resembling the real world. The entire series is a paranormal fever dream, but the musical numbers elevate this into the realm of total unreality, as characters vocalize their feelings, movements become broad and choreographed, and backgrounds shift and change to far-off or surreal landscapes with no regard for where the characters are located in the story itself.

But if I had to name my favourite thing about #DanceWithDevils, it would be its subtlety. pic.twitter.com/N8t0VvCkh4

And then the song ends, Ritsuka comes out of her reverie…and violently rejects the boys looming above her, slapping them, pushing them away, and fleeing to safety. She isn’t immune to the “bad boy” fantasy or the allure of imagined danger—she even plays along and seems to enjoy it—but Dance with Devils knows there’s a huge difference between the fantasy of danger (whether in fiction or between consenting partners) and the reality of it, and its protagonist responds to both versions in appropriate fashion.

In fact, the only people Ritsuka warms up to in “real” life are the ones who treat her with a modicum of respect, at least trying to take her personal wishes into account. Rem, Lindo, and Mage all get a genuine moment with Ritsuka because they all (however clumsily) try to do something for her rather than for themselves. Urie, Shiki, and Loewen never treat her as anything but an object to forward their own desires, despite their professed “love,” and so Ritsuka never responds to them (outside of the fantasy of the song, of course) with anything but distaste and fear.

Even when it comes to the world beyond the music, Dance with Devils rejects a lot of standard “romantic” tropes, pushing its protagonist to a finale that gives her the power and agency she’s been denied all season and truly making her the heroine of her story.

The entire series builds on Ritsuka’s increasing frustration at her own helplessness and objectification, and finally hits a breaking point in the finale, when she decides she’s done getting tossed around by all these supernatural yahoos and wants to determine her own fate. So, instead of giving her hidden power to one of the menfolk the way everyone’s been telling her to do all season, Ritsuka decides to wield it herself.

Not only does she straight-up kill the Big Bad, but she makes two major choices that everyone has to obey. First, she confesses her feelings for Rem, simultaneously telling all those other guys to back off (that they do without fuss is wish-fulfillment, yes, but DwD never pretended to be rooted in reality). Then, in a devilish little twist on the classic fairy tale formula, Ritsuka has to choose between joining Rem in the demon world or living as a human—and she picks humanity, staying with her family and the life she’d built for herself.

And I’ll be honest: I cheered out loud when it happened. 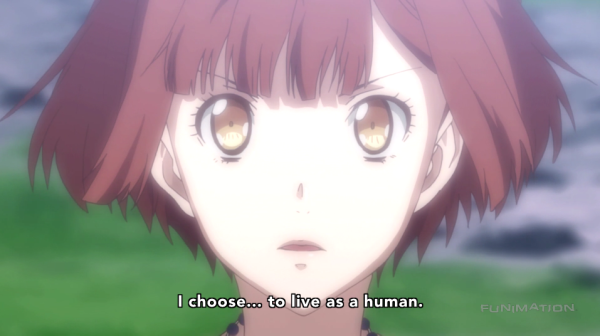 Ritsuka, after all, never really wanted any of this. Her character song at the start of the series is about enjoying school, spending time with her friends, and maybe finding a nice guy someday. And that’s okay. And the fact that she fell into the fantasy for a while is okay, too. Dance with Devils indulges in the fantasy. It adores the fantasy. But it always handles the fantasy with an irreverent self-awareness, an understanding that this is all fun and silly and maybe a little erotic, even desirable for some, but still firmly planted in the realm of make-believe.

Too many series write the fantasy of danger as the actuality of danger—they confuse the pretend with the real, consensual play with non-consensual assault—and it further muddies the issue of consent and what constitutes a healthy romance. That Dance with Devils can toe the line, bask in its own silliness, and still resolutely keep the two realms separate is a testament its ridiculous charm, and makes this an escapist ditty well worth playing.

9 thoughts on “Capriccio of Fantasy & Power: The Silly Brilliance of Dance with Devils”