Delinquency is only skin deep. 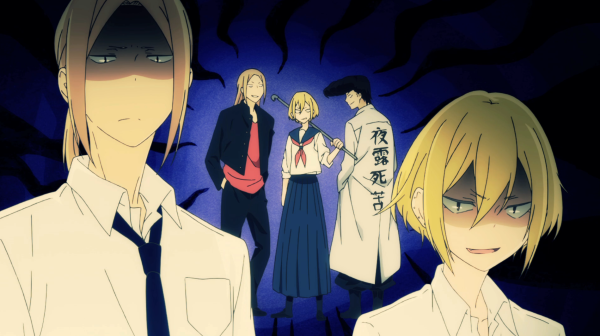 Welcome to Part 3 (of probably 5?) in my ongoing Tanaka-kun mini-essay series! This time we’re taking a look at how the show uses its characters to contrast appearance with reality, mining humor and conflict out of social expectations and preconceptions. And, yup—as promised last week, this has to do with gender norms. Hey, I gotta stay true to my #brand, right?

I mentioned last time that social norms are a subtle, pervasive source of conflict in Tanaka-kun, and in some ways all of our main high school characters are dealing with the fact that they don’t quite fit into the tidy roles they think they should. There’s a constant push and pull between how a person sees themselves and how other people see them based on their appearances, and these assumptions are often tied to ideas about masculinity and femininity.

General discussion of events from Episodes 1-10 below the jump.

END_OF_DOCUMENT_TOKEN_TO_BE_REPLACED

Gold and silver and bronze and on. 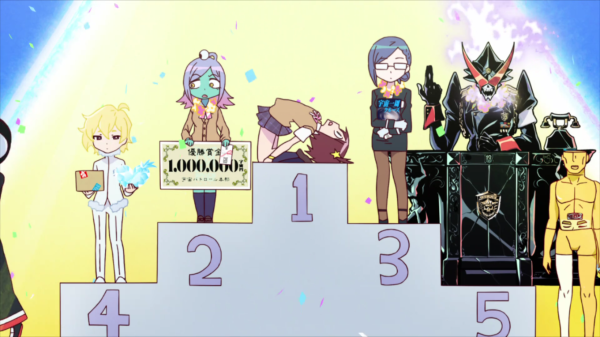 Spring might have been lacking the standout masterpiece and shoujo gem that Winter had (Shouwa Genroku and Snow White, respectively), but it more than made up for it in sheer quantity, offering up a variety of lively, stylish, and just downright fun series. In that respect, this season feels a little like last summer: I’m not sure how many of these shows are gonna make my 2016 Top 10 list, but I enjoyed watching just about all of them.

In other news, I think this is the last time you’ll see my Totally Arbitrary Rankings used in a season retrospective. More and more I’m realizing I don’t love the ranking system–it forces me to list shows one after the other even if I think multiple shows may have all been equally worthwhile for very different reasons. It’s reductive and misleading but, more to the point, not that fun. So enjoy the numbers for today, bid them a fond (or not) farewell, and look forward to a new format from here on out.

END_OF_DOCUMENT_TOKEN_TO_BE_REPLACED

Taking the  elevator to adulthood. 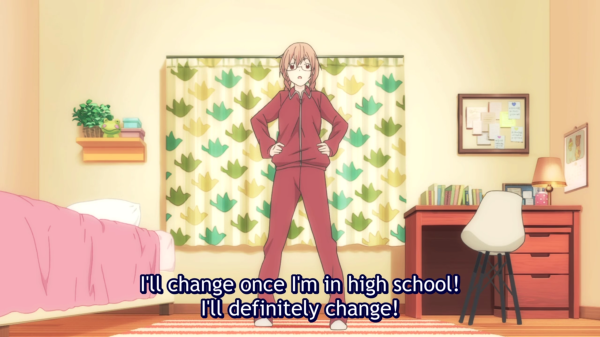 Part 2 (of ??) in my Tanaka-kun is Always Listless mini-essay series! This time I thought we’d veer away from specific cultural influences and talk about what the show does in terms of addressing adolescent concerns. ‘Cause what would this blog be without some good old-fashioned coming-of-age narrative chatter?

Given our high school setting, it’s not surprising that Tanaka-kun‘s cast spends a lot of time dealing with the bumpy transition from child- to adulthood. Sometimes this is about “grown-up” concerns like marriage or personal independence, but usually it’s more general than that, as characters struggle to find a balance between who they were/are, who the world thinks they should be, and who they want to be. In other words, it’s all about changes.

Detailed discussion of Episodes 2 & 4 and general references from the rest of the series below the jump.

END_OF_DOCUMENT_TOKEN_TO_BE_REPLACED

A miracle romance for the ages. 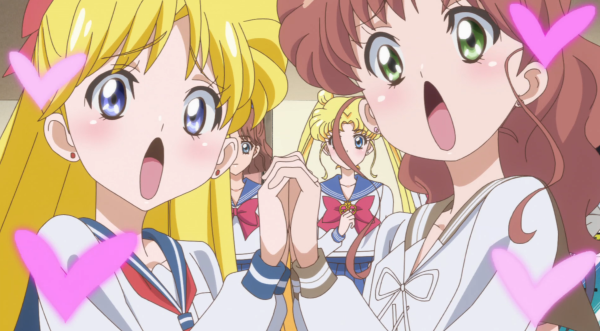 Sailor Moon Crystal premiered to a lot of excitement, but the hype train soon ground to an unceremonious halt thanks to the show’s poor production values, breakneck pacing, questionable changes to the source material, and general lack of energy. Some fans hung on. Many jumped off. With no real nostalgic attachment to the franchise and a ’90s anime I was enjoying much more, I wound up in the second group.

Then the Season 3 (“Death Busters Arc”) announcements rolled out: the show was moving from a bimonthly online (ONA) schedule to a weekly TV one, getting both a new series director (Chiaki Kon) and character designer (Akira Takahashi), and giving itself a Moon Prism Makeover. The hype train let out a low, tentative whistle. Curious but not all that optimistic, I gave the season premiere a try, and was shocked to discover it was actually…fun? Against all odds, Kon and her staff have breathed life into an adaptation that was dead in the water, thanks to a few simple changes that made a huge difference.

Zen and the Art of Laziness? 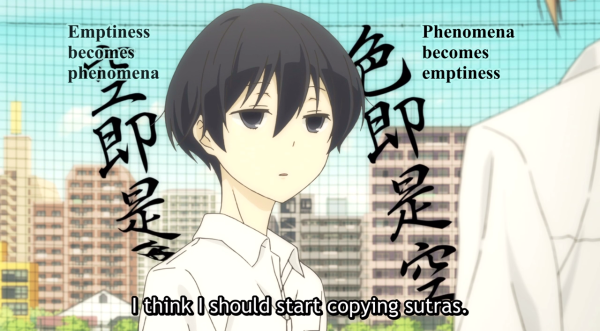 I’m trying something new this time around: A sequence of li’l essays about a single show viewed through different lenses. This is Part 1 (of ??) in a series on Tanaka-kun. And what easier, more accessible topic to start us off with than art, atmosphere, and historical/cultural influences? (She said, weeping onto her keyboard.)

As the above screenshot playfully notes, Tanaka-kun (in addition to being a cute, clever, sleepy YA comedy) has a cheerful relationship with Zen Buddhism and the Taoist philosophy that influenced Zen. While I wouldn’t say the show is overtly religious, I do think there’s a Zen spirit that inhabits its humor, art design, stories, and themes, and I wanted to spend some time chatting about those connections.

Vague references to events from Episodes 1-6 below the jump.

END_OF_DOCUMENT_TOKEN_TO_BE_REPLACED

Pick a show, any show. 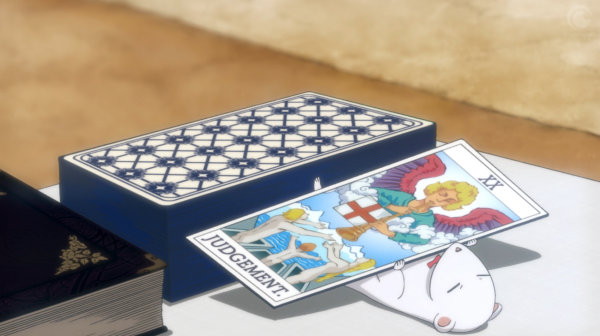 We’ve reached the midway point and Spring shows no sign of slowing down or dropping off. From calming comedies to urban fantasies to action-packed (melo)dramas to whatever-the-hell The Lost Village is supposed to be, there’s a lot of variety and remarkable quality, with most shows building on themselves nicely or, at the very least, maintaining a steady course.

While I wouldn’t say there’s a ton in the way of jaw-dropping creative ambition at this point (aside from Concrete Revolutio anyway), if you’re in the mood for entertainment, Spring 2016 has got you thoroughly covered. Hit the jump to check in with our motley crew of anime titles.

END_OF_DOCUMENT_TOKEN_TO_BE_REPLACED

Don’t mind me, I just fell over under the weight of my watch list. 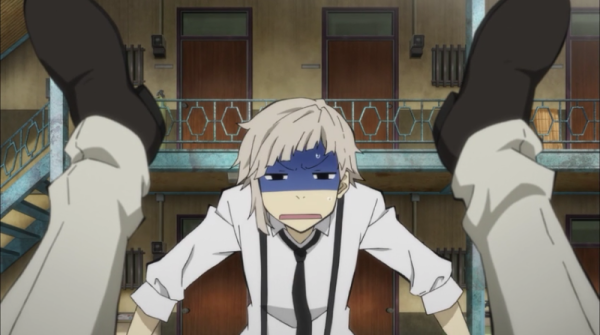 I hemmed and hawed about exactly when I should post this sucker. Due to a combination of already offset premiere dates and delays caused by the Kumamoto Earthquake (a list of ways you can help here, if you’re interested), some of these are into their fourth episode while a couple have only aired two. So consider this more a rule of three-ish review, I s’pose.

The number of shows that made it this far is, uh… not insignificant, with a good mix of comedy and drama (or at least loud glorious trashy action) to offer a little something for everyone. Even the stuff on the bubble is pretty solid, and would have been a lock during last season’s sparser schedule. I’m going to try to be brief here so as not to overload you on word count, but let’s see if I can’t praise some favorites and maybe point you towards your next favorite along the way.

END_OF_DOCUMENT_TOKEN_TO_BE_REPLACED

Be careful what you wish for? 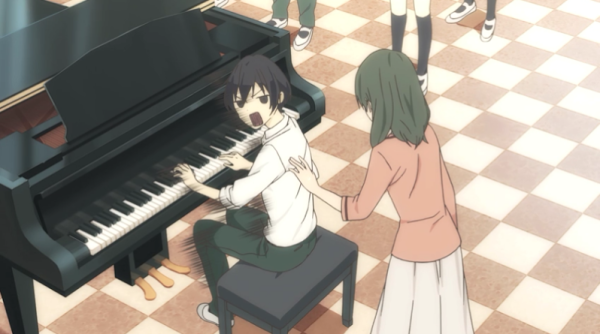 On Monday, shortly after watching four lackluster premieres in a row, I shot out a grumpy tweet hoping that the spring season had gotten all the boring anime out of the way in one go. The anime gods heard my prayer, cackled madly, and then proceeded to drop nine shows in my lap, eight of which were, at the very least, pretty good, even if they weren’t all my thing.

Some of the stuff in my “on the fence” pile is there simply because I had to draw a line somewhere or the season was going to crush me under titles. Granted, it could all fall apart pretty quickly, but staring at a potential watch list of 12+ shows for the first time since last summer is–well, daunting, but pretty exciting, too. Maybe this anime thing ain’t so bad after all.

END_OF_DOCUMENT_TOKEN_TO_BE_REPLACED

So many shows, so little time!

It’s a little late out the gate, but here’s the first batch of panning posts. I’m doing my premieres a little differently this season: I still watch every new, licensed full-length show and talk about ’em, but I’m rolling them up into just 2-3 “digest” posts and forgoing my usual extended meet ‘n’ greets for shorter blurbs divided into three basic categories: “Guaranteed three episodes,” “On the fence,” and “Probably dropped.” Not sure if I’ll stick with this in future seasons or not, but it’s how I needed to do it this time around.

If a title catches your eye, you can find out where the show is streaming by using this handy search engine. Now hit the jump to ding the bell for Round 1—FIGHT!