Delinquency is only skin deep.

Welcome to Part 3 (of probably 5?) in my ongoing Tanaka-kun mini-essay series! This time we’re taking a look at how the show uses its characters to contrast appearance with reality, mining humor and conflict out of social expectations and preconceptions. And, yup—as promised last week, this has to do with gender norms. Hey, I gotta stay true to my #brand, right?

I mentioned last time that social norms are a subtle, pervasive source of conflict in Tanaka-kun, and in some ways all of our main high school characters are dealing with the fact that they don’t quite fit into the tidy roles they think they should. There’s a constant push and pull between how a person sees themselves and how other people see them based on their appearances, and these assumptions are often tied to ideas about masculinity and femininity.

General discussion of events from Episodes 1-10 below the jump. 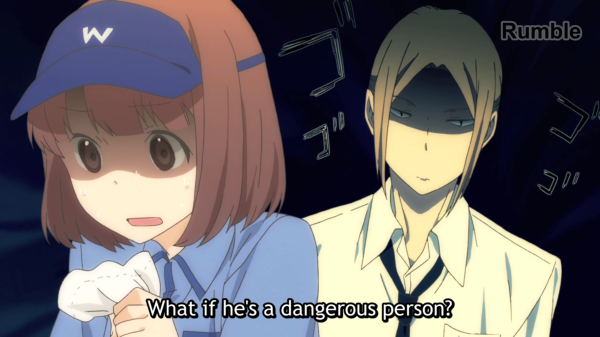 While Tanaka’s image aligns pretty well with his personality, he’s still subject to these (often gendered) expectations, such as when Saya’s talking about her “gorilla-like” (basically code for “traditionally masculine”) big brother and Tanaka admits he feels bad for Rino because she has a “scrawny, lazy” older brother instead. As is typical of Tanaka-kun, Saya quickly assures him that he’s fine the way he is, and (as is typical of Tanaka) he regains his confidence and keeps marching to the beat of his own listless drum.

In contrast, our “gorilla-like” big brother Ohta is constantly having to deal with people judging him based on his appearance. He’s a tall, long-haired, broad-shouldered guy with something of a poker face, and strangers find him intimidating because of it. WcDonald’s employees worry he’s going to shake them down for toys, little kids are hesitant around him at the pool, and cops think he’s bullying Tanaka when all he’s doing is watching a cute cat video with him. 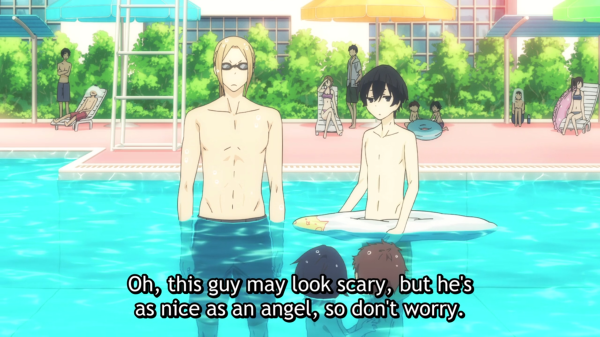 But Tanaka (and we at home) know that Ohta’s actually an easygoing peacemaker with a huge sweet tooth who enjoys housework and taking care of others. He goes against all expectations, to the point where Tanaka calls him “the ideal wife” and Shiraishi remarks that he’s “more of a girl” than she is. That the other characters have to use gendered terms to talk about how Ohta doesn’t conform to gender norms just shows how deeply entrenched those ideas are in society—and how arbitrary they are, too.

Fortunately, because Ohta’s (surprisingly) comfortable in his own skin, these (negative) expectations from others don’t seem to affect him much. He never gets depressed about it the way Tanaka does, or defensive about it the way Echizen—his partner in watching cat videos—does, either. But then, her conflict isn’t just about her image contradicting her personality, but about the contradictions within her personality itself. So maybe it’s no wonder she’s more defensive than he is.

Echizen’s introduced in Episode 3 as the “girl of contrast.” She has a short temper, a blunt manner of speaking, and a tendency to express herself physically instead of verbally (whether that’s challenging someone to a duel or snuggling them ferociously): All qualities that align with her outward “tough girl” image. But she’s also polite and helpful to the people in her neighborhood, easily flustered, a total romantic, adores cute things, and is so softhearted she can’t even bring herself to eat bunny-shaped sweets.

In short, Echizen has qualities that are both traditionally masculine and traditionally feminine, and she has no idea how to reconcile those parts of herself. She doesn’t really want to be “treated like a girl,” so she tries to hide her feminine qualities and play up her masculine ones, taking on the guise of a delinquent (an image she’s clearly crafted from stereotypes, not personal experience). But she’s also besieged by social expectations about what girls are “supposed to” want (like wearing short skirts or getting married). And she does have some “girly” traits, try as she might to downplay them. So she wonders if maybe she should discard all her masculine qualities in favor of her feminine ones in order to be accepted by others, and… 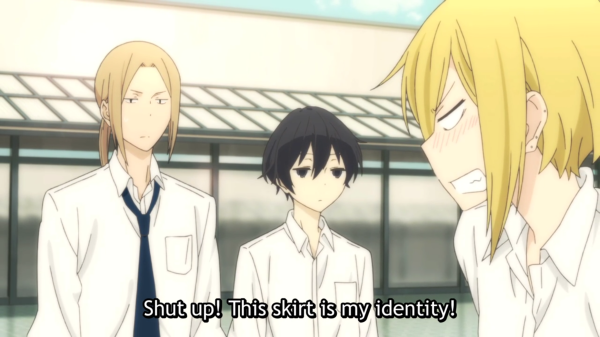 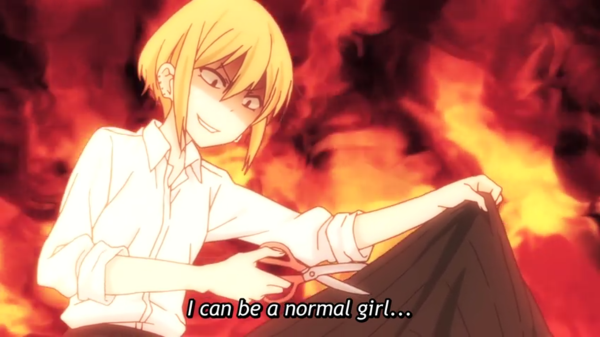 Basically, Echizen is kind of a mess, the most insecure and uncertain member of the high school cast. If Tanaka-kun is about understanding oneself, accepting limitations, and easing into change naturally, then Echizen is easily the farthest from achieving that, which I think is why she has the loudest (over)reactions and gets teased the most relentlessly by both the author and Tanaka himself. Tanaka, Ohta, Miyano, and Shiraishi all have a general idea of where they want to go, even if they don’t know exactly how to get there. Echizen doesn’t even know that.

And I relate to her so hard. Because it’s tough being a girl who isn’t traditionally feminine (and doesn’t particularly want to be traditionally feminine) without feeling like you have to then discard every potentially “girly” thing about yourself lest people treat you exactly the way you don’t want to be treated. And if you start to want one of those “girly” things, you wonder if the only way to get it is to discard every potentially “boyish” thing about yourself lest your “girlishness” be called into question. Gender presentation starts to feel like a razor’s edge: pick one side or the other, or you’re going to cut yourself. 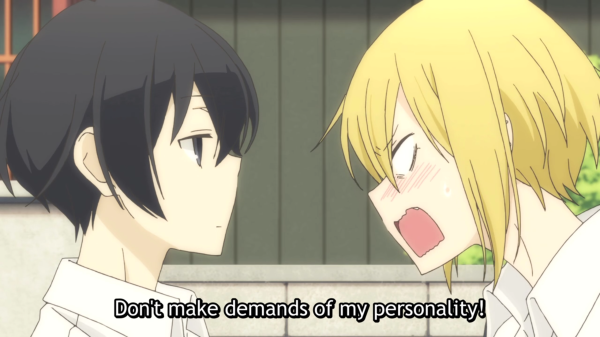 Echizen’s struggles are, like the rest of the cast, treated lightly and comically, but there’s real anxiety here, and a touch of commentary too, I think, about the pressures placed on people (especially girls) to adhere to these rigid ideas about gender. Whether it’s Ohta passively defying public expectations or Echizen actively trying to shape her identity (even as she fights against parts of that same identity), Tanaka-kun is all too aware of how a person’s appearance affects the way they’re treated by others, and the many challenges that come with it.

Which is why I’m glad the series makes it a point to highlight the difference between image and identity, and to call attention to how unfair it is to expect “gorilla-like” boys to be troublemakers and softhearted girls to be demure. Barring a few exceptions (c’mon, Ohta, let Tanaka wear a women’s kimono if he wants to!), the show is as relaxed about gender norms as it is about everything else, featuring characters who don’t fit into neat boxes and characters who love them for it. Just one more reason I enjoyed this comfy comedy so much.

“Wow,” some of you might be thinking, “it’s impressive how you managed to spend all that time talking about Echizen struggling with social norms and never once mentioned her relationship with Miyano! It’s almost like you’re deliberately avoiding the hot-button topic of queerbaiting or something!” Worry not, dear readers. I know the ‘ships of Tanaka-kun are a subject people want to see discussed, and I plan on doing it. But it’s a tricky one, and possibly a lengthy one, and so it is definitely an essay for another day.