Are you not entertained?!

Waiting on slowpoke Gamers to air its third episode meant a whole bunch of shows had already made it to their fourth, hence the “ish” in that title. Ah, well. Just means more tasty content for you dear readers, right?

I’m not sure this is what I’d call a “good” season, but it certainly is a fun one. Pleasant surprises, ambitious messes, exquisite piles of trash, and (sigh) Welcome to the Ballroom rule my summer watch list. While several of them could fall off a cliff in a hurry if they aren’t careful (and some maybe already have?), overall I’m having a pretty good time. Hit the jump to see who’s gaining ground and who’s falling behind 3-4 episodes into this wild, wacky season.

This show has no business working as well as it does, and yet it’s hands-down my favorite comedy of the season and swiftly becoming the series I most look forward to each week. One-part sports series, three-parts high school comedy, it pokes playful fun at its characters even while treating the more serious aspects of their lives with kindness and affection.

It’s sympathetic towards Aoyama’s compulsion, and even spends part of Episode 4 not only including another germaphobe and showing how different people can have different approaches to a similar condition, but also depicting how much more relaxed and outgoing they both are when interacting online via an MMO.  Aoyama-kun has no problem being incredibly bizarre and goofy, but it also has no problem being incredibly thoughtful and sweet. That combination is all but impossible for me to resist.

While it hasn’t charmed me quite as thoroughly in Episodes 2-3 as it did in its premiere, this is still my top series of the summer, a dark fairy tale with an energetic heart, a fully realized world, and some immensely likable characters. I have an automatic soft spot for courageous crybabies, and Riko’s adventurous nature combined with her heart-on-sleeve emotional straightforwardness has made her an immediate favorite.

It lost a few points in its second episode thanks to some unnecessary (although not sexualized) nudity, and I can’t help but watch each week with the tiniest bit of skepticism, always worried it’s going to go Full Grimdark and lose me. These early episodes were largely prologue and preamble, setting us up for the inevitable journey into the abyss itself, so I should have a better idea of what Abyss is all about when we check back in another few weeks. So far, though, this is still very much my jam, and I dearly hope that continues.

Out-of-place cute-girl character designs aside, I have zero critiques about PrinPal at this point. It’s a smartly paced, sharply written, supremely entertaining spy action thriller that’s already done a lot of work developing its characters and has a ton of potential in terms of where it takes both its story and cast next.

Toss in some well-directed action sequences, a jazzy soundtrack by Yuki Kajiura, some low-key yuri undertones, and just the right amount of darker elements without it feeling gratuitous or unearned, and you’ve got all the ingredients for a solid series. If it can keep telling compelling self-contained stories while also expanding its world and central cast, PrinPal could easily (and surprisingly!) be one of the best series of the season.

Listen, y’all. This show is bad. It is also amazing. James at Anime News Network gave Episode 4 a grade of “A+ levels of F,” and that’s so pitch-perfect I’m not sure there’s anything I need to add to it. Each episode throws some new ridiculous, over-the-top plot twist or reveal at the audience, ratcheting up the WTF-ery in practically every frame without so much as taking a breath between story beats to let us digest whatever wild development went down this time.

Vrai and I created a #VaticanBros tag on Twitter to laugh at and applaud the show in equal measures, so if you don’t mind spoilers that may be the best way to get a feel for what you’d be getting into. We just wrapped up our priests’s first “case” (investigating a virgin conception that went just about everywhere I didn’t expect) and it’s hard to imagine how they’re going to top it in the coming weeks. I sincerely look forward to seeing them try.

I had this in my “Secure(ish)” pile after Episode 3, watched Episode 4 earlier today (a poorly handled attempt to discuss eating disorders that basically ends in “well this guy likes me so I guess I’m all better now!”) (ugh), and then wondered how secure it actually was.  I’m fascinated by 18if‘s dream worlds and self-contained stories, and there are some genuinely excellent narratives and stellar direction to be found here (Episode 3 in particular)… but I’m starting to think my initial concerns were legitimate, and this really is a “March of the Damsels” kind of series.

If that is the case, then I’ll have to decide if the well-developed female characters, general thematic focus on bucking cultural norms, and occasionally standout visuals are worth the inevitably pat, over-simplified conclusions. (Of course, if my pet theory comes true and Boy Protag Haruto isn’t even real, that would make things more interesting, huh?) I’m still watching for now, and probably will through the midway point, but I’ll be weighing the pros and cons in the coming weeks, that’s for sure.

What a strange, surprisingly intriguing little show Yokai Apartment has turned out to be. I thought I might stick with it to watch a bright, laid-back, supernatural slice-of-life, and then the next thing I know there are stories about child abuse and animal cruelty and women being stalked and killed. (Although, should I really be surprised? You don’t become a ghost because you lived a happy life with no regrets, after all.) All of which is told in a stunningly matter-of-fact manner, explained but not sensationalized, and always with an undercurrent of hope for the happier existences the spirits have found after death.

I suppose that’s what the apartment complex is all about, really: People with past trauma coming together to offer support, build a community, and help make each other’s “lives” a little better. Our protagonist is no different, and has been developing into a compelling character in his own right as he deals with repressed grief for his deceased parents and a building anger about being forced to grow up so much faster than his classmates. I’m still not ready to fully commit to Yokai Apartment, but it’s been a much more memorable journey than I’d expected thus far.

Hangin’ by a Thread

As much as I loved Gamers‘s second episode–about a “cool” kid who basically changed his entire personality before entering high school, and the friendship he develops with the protagonist over their shared love of video games–I found myself alternately enjoying and despising its third one. It’s charming and refreshing when talking about games or building friendships, and even spends some time with a girl gamer who’s fed up with sexualized moe female characters, which was very nice to see. But it also seems committed to turning into a “wacky” rom-com of misunderstandings, and it’s just not clever or original enough to make that well-worn tactic work.

Add to it that the girls haven’t received nearly the amount of development as the boys (just about everyone is trying to change themselves based on what they think their crush will like best, but the boys have at least been given other character traits to go along with that main one), and I find myself eyeing this seried with more and more exhaustion as the minutes tick past. I’m going to give it another week to see if it wants to spend some time fleshing out its female characters or at least backs off of these shoe-horned love polygon shenanigans. If not? Gamers may need to go.

Welcome to the Ballroom 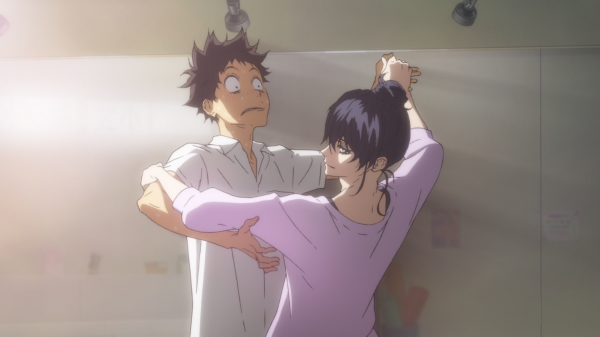 I’m never using a “Probable Locks” section on a premiere review post ever again. What a difference two episodes make! Reducing one female character to a boob joke? Having the main girl not only get walked in on in the changing room, but later actively assaulted for laughs? And giving none of the women any goals or roles beyond supporting the male characters? Overall these issues are a relatively small amount of time each episode, true, but it adds up, and it leaves a sour taste in my mouth every time.

If I loved ballroom dancing I might be able to push past it, but I don’t. Welcome to the Ballroom was always gonna have to carry me with its cast, and it’s failing on all fronts right now. Honestly, the only reason I might stick with it is because there’s a chance I could get a decent article out of it. Otherwise I’m having a tough time thinking of a reason to keep this on the watch list at all.

A new, brief category! Now that I have access to Strike shows I’m attempting to try out at least some of the series I wasn’t able to watch the past few seasons. Currently I’m 3-5 episodes into:

If you enjoyed this pipin’ hot plate of anime check-in reviews, please consider tipping your server through PayPal!