Diving in for one last look at summer’s little treasures.

The Fall season may be well under way, but that doesn’t mean we can’t take some time to bid fond farewell to our Summer standouts. After spending two weeks out of town and then writing a whole lotta final thoughts on orange and 91 Days, my schedule’s a mess right now (I haven’t even finished all of the shows on my summer watchlist), so this post will be shorter and more informal than usual so I can get it out before the Fall season overtakes me completely. Thanks in advance for your understanding!

As all that may suggest, Summer’s been pretty hectic on my end thanks to a second move, family events, new writing projects, and the aforementioned two-week trip, so maybe it’s no surprise that I gravitated toward lighter comedies and escapism this season. That said, there are still a trio of shows on this list that’ll punch you right in your feels pouch. Good thing you’ve got those other soothing shows to help ease the sting, eh?

Oh–and I mentioned this during my Spring retrospective, but I’m retiring the numbered rankings in favor of a looser structure: I’m dividing them into general “tiers” and then just listing the shows within that tier alphabetically. So don’t take the order as any indication of quality–I liked everything on this list, and I’m glad they don’t have to compete with each other.

The Favorites Next Door

In a Sentence: Seven years after the murder of his family, Angelo receives a letter with the names of their killers and begins to hatch a plot for revenge.
Content Warning: Violence (some graphic; against adults/teens and kids)

I covered this one for Anime Evo thinking it would be a straightforward gangster drama, then around the midway mark it dropped a bucket of cinematography, thematics, and subtle character development on my head and left me writing lengthier and more in-depth analyses each week. From start to finish it kept me on my toes with well-orchestrated tension and unexpected plot twists, all the while endearing me to its central cast of complicated, damaged young criminals. I was far too invested in this series, and that’s a very good thing.

I have a more detailed series review here, or you can check out my entire series of episodic mini-essays here.

I talked about this season in-depth on MyAnimeList, and my thoughts there held true through the finale. After taking a few episodes to find its footing, Season 2 became a non-stop giggle-fest of cheeky high school irreverence. Gleefully stupid and self-aware without being smug, Cute High parodies magical girls and high school dramas in equal turns, and always with just enough emotional honesty to keep it from devolving into pretension. I’m not sure anyone had more fun working on a series than the Cute High creative team did, and I’m not sure I had more fun watching a series than I did this one.

In a Sentence: There are two surprises waiting for second-year student Naho on her first day of class: A transfer student named Kakeru, and a letter from her future self, offering her advice so she doesn’t make the same mistakes twice.
Content Warning: Deals with depression and suicide

orange’s central story and characters are well worth an “A” grade, but the poor production values and stretched-out pacing in its middle act drop it down a slight notch. That said, the writing is stellar, featuring a realistic group of teens and a sympathetic, nuanced depiction of grief, depression, and suicide. I loved the original manga, and while this adaptation isn’t quite as great as it could have been, it’s incredible when it counts, and left me an emotional puddle on more than one occasion.

I wrote a bunch about this one, too! You can click here for the full series review, or here for commentary on each episode.

In a Sentence: With the help of an enigmatic tactician and a gruff traveler, the idealistic Dan Fei must gather a team of unlikely allies to take back the holy weapon stolen from her shrine.
In a Different Sentence: THE GUY WHO WROTE MADOKA MAGICA MADE A PUPPET SHOW Y’ALL.
Content Warning: Violence (against puppets); some of the characters are sexist, but the gals themselves are pretty capable

Dangling plot lines and half-finished character arcs be damned–I loved this campy puppet fantasy. (And hey, for all I know, those issues will be resolved in the upcoming Season Two!) I could tell you about it, but you know what? Nick Creamer has already done it for me. So check out his recommendation/pitch over at Crunchyroll, and know that I’m standing somewhere just off-screen flashing a bunch of thumbs-ups and nodding enthusiastically to all of it. 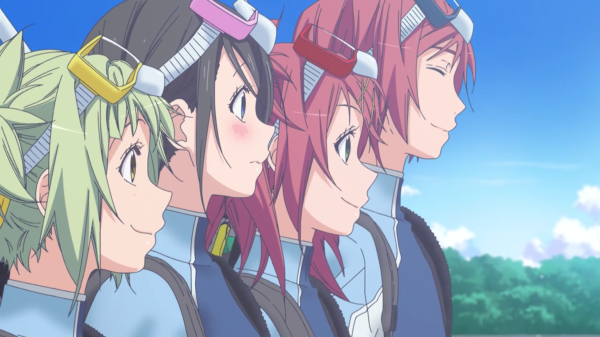 In a Sentence: This relaxing high school comedy follows anxious Futaba and chipper Hikari as they join their school’s scuba diving club, facing new challenges and building new friendships along the way.

I came so close to dropping this one, but Director Sato’s inherent charm eventually won me over, and I’m so glad it did. Amanchu is a warm, lightly comedic story about taking chances, overcoming anxiety, and finding the fun and beauty (thank you, gorgeous underwater art) in everyday life.

The series sometimes fumbles when it turns its attention to the supporting cast (although their teacher is a delight), especially when it relies on tired “girl uses boy as punching bag”-style slapstick. Still, it’s honest and moving when focusing on the shy, high-strung Futaba, her fears, and her building relationship with Pikari. A happy surprise, and just the soothing weekend show I needed. 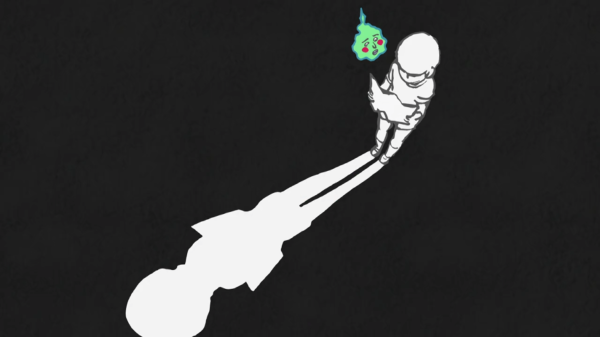 In a Sentence: Junior high student and powerful ESPer Mob does his best to deal with school clubs, telepathic rivals, family strife, and his part-time job as an exorcist’s assistant.
Content Warning: Violence; depictions of bullying

I dropped Mob Psycho after the third episode because I couldn’t deal with its unrelentingly anxious tone, but I gave it another try once my own life wasn’t quite so stressful, and I ended up finishing it just in time for this write-up. I’m still in a weird place with this one, because even though I didn’t exactly enjoy it, I think it’s one of the best shows of the season.

While what’ll likely stand out most is its dynamic animation and unique, evocative art direction, this isn’t a matter of “all style no substance”–Mob Psycho is also a smart, moving coming-of-age story about social outcasts, wanting to change, the misconceptions of power, and the importance of kindness. Add to this an endearing, awkward protagonist and his equally endearing con artist of a mentor, along with ONE’s dry, offbeat humor, and you’ve got the recipe for a fascinating little series, bombastic and thoughtful in equal measures. Personal discomfort aside, I’m very glad I came back to it.

Grade: You know what? Pass. My relationship with this one is so odd that I don’t feel I can give it a proper grade.

Sweetness and Lightning (Amaama to Inazuma)

In a Sentence: Struggling to raise his young daughter on his own, recently widowed Inazuka Kohei decides to improve his culinary skills–and finds an unlikely cooking class partner along the way.

Sweetness and Lightning is adorable and charming. It’s also one of the better shows I’ve seen in terms of writing little kids, depicting kindness and concern alongside mood swings and tantrums (oh hey, I think I just figured out why it’s called Sweetness and Lightning! Fancy that!). Every so often it touches on more emotional issues of grief and loneliness, but mostly it’s a cute cooking show about a cute kid and her cute dad building a found family.

It’s very nice, which is both a strength and a weakness, because while S&L regularly delighted me (and got me to crave new foods each week), it’s not a show I ever missed or thought about when I wasn’t watching it. Still, it left me with regular warm fuzzies, and that’s nothing to sneeze at. If you like cooking shows or are in the mood for something light and sweet, this little series might be right up your alley. 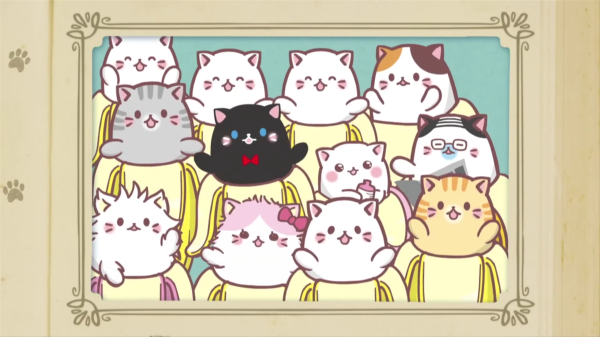 Of course I finished Bananya, which continued to be a show about bananas who are also cats, and there is literally nothing else you need to know about it. It was weird and fun and exactly what it needed to be. I mean, just look at those li’l cuties.

There are also a few shows I started and haven’t finished for various reasons, although I also haven’t officially dropped them either. Figured it was worth mentioning them, so:

How about you, lovely readers? What was your favorite show of the season? Sound off in the comments below!