Sometimes I feel like I’m playing Russian Roulette with this season.

Every week I wonder if I’m going to get good SuperS or UGH SuperS, or maybe just plain old meh SuperS. It’s a gamble, and if I lose, the price is… well, a few grouchy words and a large red hand print on my forehead, mostly. It’s a low-stakes game. In some ways I’m grateful for it—I’ve given up on there ever being any plot this season, so the sliding scale of quality keeps things exciting, at least—but I do miss the days when I could just sit down and feel confident that something fun and/or emotional was going to happen.

This week was… not great. It wasn’t even table-flip-worthy, just one-part forgettable and one-part unpleasant. But, on the plus side, it means the word count is a lot shorter, too! So take solace in that, I s’pose. Then hit the jump for a lady who deserves better, and a Fish of whom I expected better. 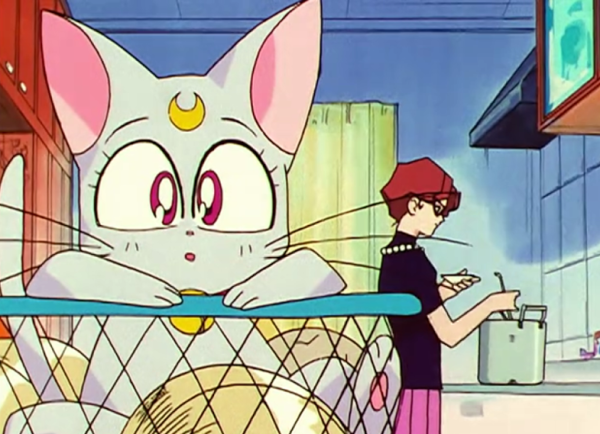 There’s a grouchy lady about town, arguing discounts at the grocery store (while someone who surely resembles yours truly stands two spots back, contemplating murder) and refusing Mamoru’s offer to share his umbrella. Still punishing him for his R antics, the universe tries to run him over with a truck, but he survives…

…Only to have his girlfriend scream in his ear because how DARE he try to keep an old lady from dying of pneumonia, THE TWO-TIMING CAD. Incidentally, I spent most of these two episodes shouting “Shut UP, Usagi!” at my tablet, so. You know. Yay for that.

“You reckon it’s too late for me to throw in my lot with Beryl…?”

Once the shrieking dies down, Rei explains why grouchy lady is grouchy: She has an awesome house and land sharks are constantly pressuring her to sell it, so she’s automatically suspicious of everyone. Except kitties. Kitties are totally cool, as proven when Diana tries to call her out for dissin’ on King Mamoru and winds up getting a shower and some delicious pot-au-feu instead. While sitting right at the table, no less! The table set for… three? “Well, this can’t possibly end in a dead husband,” Armchair Critic Josei (incorrectly) surmises.

Chibs is suspicious and goes over to investigate, wherein she finds a famous Japanese French chef (er, Japanese lineage, French cuisine) hovering outside the gates waxing nostalgic. But I’m sure that’s unrelated to any of this. Surely. She and Diana head inside and note that everything in the house comes in sets of two. Yeah, this is officially getting weird.

Hawk knows that a fine wine only gets better with age, so he heads over to the lady’s house (her name is Mayako, though we don’t learn that till the very end of the episode) and tries to stage a romantic rescue when the land sharks come a-callin’.

He succeeds, but Mayako can smell a scam from a mile away and tells him to git. So he busts in and attacks her instead. Like he do. But Chibiusa can’t transform from behind the coffee table, you guys! Hawk might SEE her! No, it’s MUCH better if Diana distracts him long enough for Chibs to run outside and transform in front of the open glass doors instead! Sailor Moon logic is the best logic.

She literally runs into Usagi along the way because of reasons involving jealousy that are too stupid to bother recapping, so the two sailor suit up and face down our newest Lemures, Autobiko the Acrobatic Ride. She’s a lady in a wheel. Of course she is. She’s also a pretty sad villain, as all she does is trash Mayako’s house before the girls lead her outside and Tux hits her in the face with a rose, which apparently does enough damage that the Bunnies can Stage her Out.

And I thought my first car was a lemon.

Then that Chef Ono yahoo who’s been wandering around town in a nostalgic haze shows up and is all like “Mayako! Baby! Remember how I left you 20 years ago to become a famous chef and never bothered to call or write and you’ve just been sitting here ALONE protecting this land for TWO DECADES in the faint hope that I’d come home? Well I was in the neighborhood and was like ‘Ehhh, I got nothin’ else to do this weekend,’ so how ‘bout you ‘n’ me turn this house into a restaurant like we always wanted, huh?”

Even as Mayako got all gooey-eyed and agreed and the two fulfilled her 20-year-old dream that she was for some reason incapable of doing on her own even though she’s a perfectly accomplished chef and clearly a tough, independent lady. Because LOVE or whatever. Romance, Sailor Moon. Yer doin’ it wrong again.

There’s an evil Alicorn going around setting trucks on fire. Well, now we know what Pegward does with his Saturday nights! While the Moonies discuss this strange turn of events, Chibiusa’s getting asked out by the resident exchange student, Robert the Blonde Soccer Player. Her gal pals are happy, her guy ally less so, and Chibs has no clue how to respond.

And so, as the news reporters calmly warn everyone to be on the lookout for a winged horned horse that’s setting trucks on fire (Juuban reporters continue to be my favorite thing), Chibiusa discusses her relationship woes with first the Moonies and then Pegward. The gals assure her that she doesn’t need to approach this too seriously—just go out with him (“To WHERE? You’re like EIGHT!” comes a voice from the couch) and see if feelings develop. “Love” is just about “wanting to spend time with them,” Mako actually pretty wisely says.

Pegward, on the other hand, sulks into his crystal ball and gets all Tsundere Shark about it.

Down in Leers!, Fish’s “plan to lure out the scouts” (hmmm) isn’t working and their pals aren’t getting any work done, so they decide to take on the next Dream Target and OH, DAMMIT, FISH. And dammit Sailor Moon, while we’re at it, because… UGGGH…

…Fish… HNNNGH… Fish goes after the elementary school soccer player. And remember how it was creepy when Tiger lured the samurai girl away? Yeahhhhh, this is WORSE, because Fish actually professes to finding little boys “delicious.” So they… RRRGH… they dress up as a young woman and flirt with Robert.

Maybe I used up my “BOOO” gif too soon…

About the only mitigating factors are that Fish isn’t aggressive about it and Robert immediately shoots them down, forcing Fish to quickly move on to Plan B, which should REALLY just be Plan A at this point. Robert winds up on the Examining Table, but this all happens a few minutes before Chibiusa planned to show up and answer his date request, so she (and the nosy Moonies) are nearby and can spring into action. Guess it’s a good thing Robert didn’t just give her a note card and ask her to circle Yes or No, innit?

Fish is kind of the worst fighter ever, but their Lemures Mawashitaro is a super-buff Merry-Go-Round horse who literally flexes a spinning carousel of doom into existence (yes, he LITERALLY DOES THIS), trapping the Bunnies in a wind bubble that separates them from both Pegward and the other scouts.

…I just can’t stay mad at you, Sailor Moon.

Pegward urges the guardians to believe in him so he can give them tricked out Super Transformations too, but they’re mighty suspicious of Pegward after all the trucks he’s been setting on fire (although us at home can now be pretty sure that was Mawashitaro’s handiwork) and can’t trust him no matter how hard he bats his eyelashes at them.

So Pegward rams himself into the wind bubble until he passes out or the Moonies believe him, whichever comes first. It’s the Alicorn equivalent of a temper tantrum, near as I can tell, but it works, and the gals get their own glitter bath, souped-up Lovely Items, and fancy-pants jewelry.

He went to Jared.

Everyone’s attacks are the same except directed by George Lucas, ‘cause they’re FASTER, MORE INTENSE! They shatter the wind bubble, allowing Usagi and Pegward to Stage the imposter Outta here. Then Chibs has a rendezvous to make! Poor Robert’s day doesn’t get any better when she turns him down, but he takes it in stride, figuring it’s because she already has someone she likes.

The Moonies watch from the tree line, so rapt that Usagi… siiiiigh… Usagi stood Mamoru up for their date. Rei wonders why he hasn’t broken up with her yet, and I just… Yeah. I’m kinda with you on that one, Rei.