When in doubt, write an Ami episode! 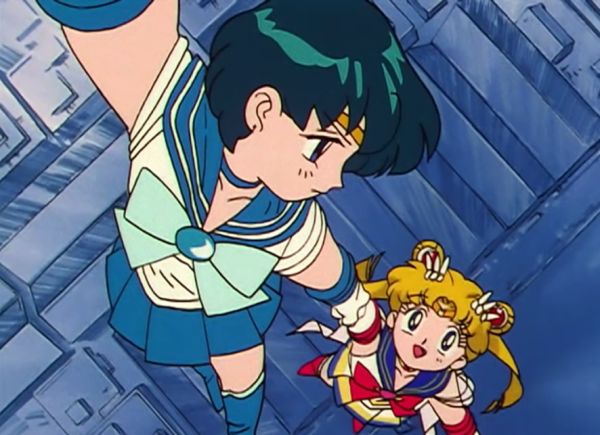 Two-thirds of the way through Sailor Moon and I feel confident declaring that it is scientifically impossible to have a bad Ami episode. I’ve come to terms with the fact that she is not the main character, and I enjoy the other scouts an awful lot, but Ami episodes just have a certain… thoughtful kindness to them that I appreciate, I s’pose, a cozy confidence that our temporary main character is self-aware enough to recognize her problems and work to solve them. And coming off last week’s rough ride, we really needed the smooth, steady hand of an Ami-driven episode again.

Oh, also, it involves cars. In case my subtle metaphors didn’t give that away.

Mamoru’s life continues to be suffering, as Ami spots him out with an older woman and LEAPS to the conclusion that there’s hanky-panky happening. Now, in Ami’s defense, their conversation has some doubles in its entendre and a key does pass between them, but still, is that any way to treat your best bro?

Fortunately Ami is a girl who learns from her mistakes, so once Mamoru clears up the misunderstanding—the woman is Ichinose Natsumi, the mechanic who’s working on his car—she apologizes and even offers to help out at the auto shop to make up for it. It’s worth noting that all of the other gals jump to a similar conclusion shortly thereafter, but NONE of them bother to apologize, not even his girlfriend. So, yeah. Ami ain’t perfect, but she’s still streets ahead of her Moonie comrades. 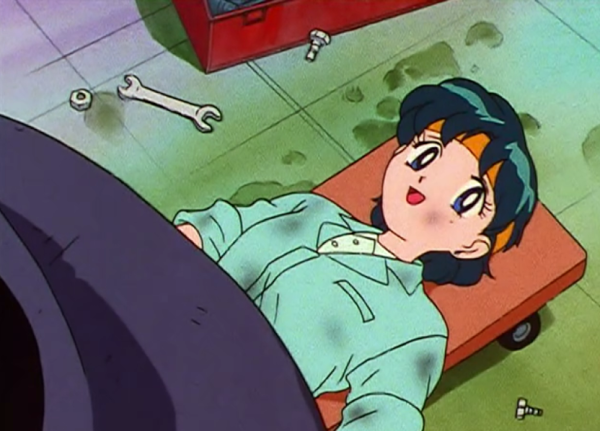 “And if you have to ask what that means, then you’re streets behind!”

Anyway, back to Natsumi, our cool lady mechanic who’s also devoted the last several years of her life to trying to get an old clunker up and running. She and her husband made a vow to fix it together, but then he went and died on her, so she’s had to go it alone. Ami was so inspired that she decided to help make Natsumi’s dream come true.

Hawk makes Tiger look like a respectable gentleman this week, as he professes to a particular fondness for widows because they’re the easiest to exploit. So he dresses up like OH, DAMMIT. Seriously, Hawk? Seriously?! YOU DRESS UP LIKE HER DEAD HUSBAND?! Even for an evil circus troupe member, that is LOW.

Although I am impressed by your costuming skills. The likeness is uncanny.

@joseinextdoor Don't know if you saw the newest Sailor Moon episode but the disguises were ON POINT! #sailormoon pic.twitter.com/hDeebebeF3

The sight of her resurrected hubby (and all those long hours in the garage) causes Natsu to pass out from exhaustion. The Moonies check her into (presumably) Ami’s mom’s hospital. Hawk sneaks in and hits her with a massive one-two punch of “I love you” and “Run away with me,” and she’s burned out enough that this doesn’t sound like a bad idea—but not so fast, Miss Natsumi! There’s a pint-sized superhero who’d like to have a word with you!

Chibiusa sneaks Natsu out of the hospital and shows her the rest of the Moonies busily working on the clunker, trying to make her dreams come true. “They aren’t just your dreams anymore,” she says, echoing Mako’s sentiment from the novelist episode. And, as I did there, I don’t really agree with this. I mean, it’s cool that Natsu inspired the Moonies, but she’s under no obligation to continue doing something that’s exhausting her to the point of collapse if she doesn’t actually want to do it. Chibiusa’s heart is in the right place, but her message is a little misguided, sounding more like peer pressure than encouragement.

Fortunately, Natsu DOES still enjoy working on cars, so the end effect is a positive one, as it helps her feel less alone and seals her resolve to stay at the shop. Emotional scheme defeated, Hawk goes for Plan B: Good old-fashioned kidnapping! CAR CHASE, Y’ALL! 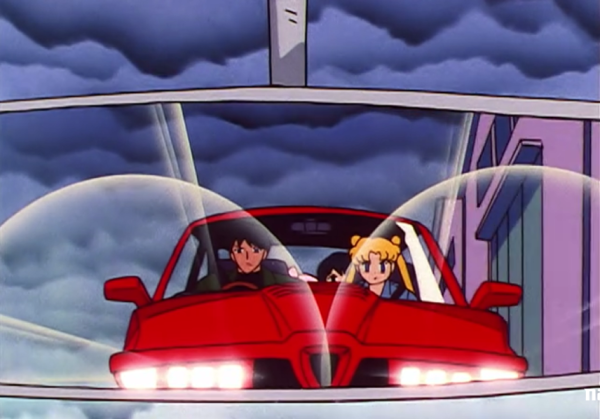 It is taking every ounce of self-control Mamoru has to not start singing “Danger Zone” at the top of his lungs right now.

The team enjoys another delightful action sequence when they finally catch up with Hawk (alas, poor Mamoru’s car…) and he unleashes Buranko, a trapeze specialist. There are giant scissors and last-minute catches and it ends in Tuxedo Mask swinging in from a crane to scoop up three Moonies at once. It’s beautiful.

But alas, it must come to an end, and everyone must return to the auto shop. Thanks to the Moonies’ hard work, the clunker actually starts(!) and drives out of the garage… for all of five feet, anyway.

This is kind of the perfect ending, actually. While it’s sweet that the Moonies wanted to make Natsu’s dream come true, in the end, this victory would’ve been hollow if Natsu herself wasn’t the one who accomplished her goal. So this will show her that it can be achieved but still allow her to achieve it on her own. And that’s a nice little cap to a nice little episode. Ami episodes, man. What can’t they do?

This one’s going to have some epic Sensei Next Door footnotes, so look forward to those at the end of the post. In the meantime, let’s meet Akiyama Miharu, an adorable tiny swordfighter who’s run away from home to live under a bridge and accept all challengers until she can call herself the best in Japan. Chibiusa takes a shine to her badassery and offers her a place to stay in exchange for training lessons.

I kinda wish the entire episode had been about Chibs learning swordplay, and not because (okay—not JUST because) I was really hoping to make some more Steven Universe references. No, it’s because half of this episode is about Miharu’s rocky relationship with her mother, who runs the Akiyama Dojo and is kiiiind of the worst. Her response to her daughter running away is to find her, physically harass her under the guise of a swordfight, verbally harass her by insisting she’ll never be amount to anything, and then saunter home all proud of herself. 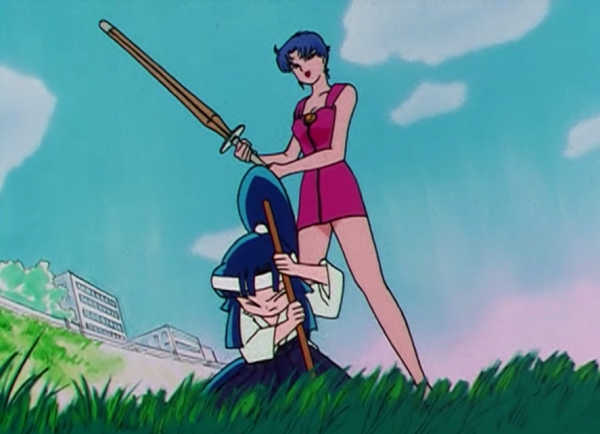 “Parent of the Year Award, here I come.”

The Bunnies think she sucks almost as much as I do, so they go to the dojo to Have Some Words. Those Words end with AkiMama telling them to mind their own beeswax and grumbling about how her daughter is “too single-minded.” Chibs is irate, but Usagi starts to wonder if things are more complicated than she first thought. And this is a good thing because understanding nuance and the complexities of interpersonal relationships is important, don’t get me wrong, but… it doesn’t really excuse the way AkiMama is going about this, y’know?

The weird thing about this episode is that, while I quite enjoyed it while I was watching it, I find it more troubling the longer I have to think about it. AkiMama aside, there’s also the scheme Tiger hatches while the Moonies are off Having Words. He’s targeting Miharu (obviously), and his plan involves winning her trust as a fellow swordfighter. The whole battle sequence is a tremendous amount of fun, as Tiger’s a huge samurai drama fanboy and gets REALLY into the historical references and stock dialogue. 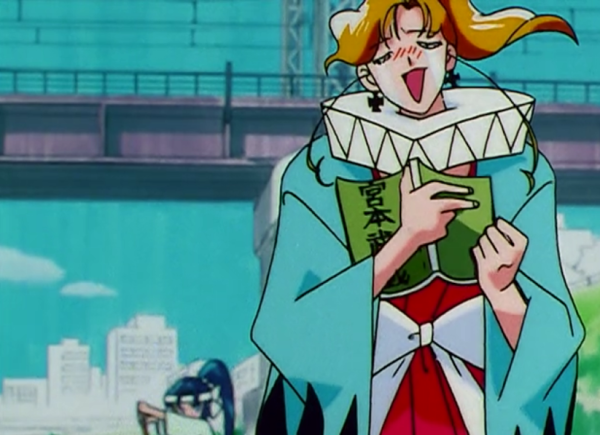 “OMG OMG, maybe we’ll finish the fight by running at each other and swinging our swords at the same time LIKE I CANNOT EVEN!”

After he cheats to win (boo, hiss!), she asks to become his disciple, so he leads her into the woods and… and suddenly I’m not having fun anymore, because the assault metaphors have been pretty thoroughly ingrained into these interactions (especially Tiger’s) at this point, and this is our first Dream Candidate who’s also a child, and… yeah. The implications are NOT comfortable ones.

Worse still is when Tiger launches his attack and tells Miharu this is her own fault because her “single-minded desire to be strong blinded her to everything else.” It echoes her mom’s words to the Bunnies, sure, but is this REALLY the time or the character we want hammering home the episode’s theme and AkiMama’s flimsy-if-not-somewhat-valid point? I admit that I was slamming my face into my palm at Miharu’s quickness to trust a total stranger, but THAT DOESN’T MAKE THIS HER FAULT and she sure as shit didn’t “bring it on herself.” So the only “lesson” I’m taking from this is that Tiger is a horrible predator and her mom is such a neglectful parent that she’d let her young daughter live under a bridge and get abducted.

The good news—such as it is—is that the Bunnies, Rei, and Makoto were in the area and suspicious of the strange man taking the little girl into the woods, so they’re there to keep Miharu from further harm. Then things get fun again as the scouts battle Ayatoriko, the Cat’s Cradle Expert, and the animators have an absolute field day with her attacks (and no, the Japanese word for Cat’s Cradle has nothing to do with cats, so given the web-like nature of the game a spider monster makes perfect sense here).

Plus it gives Miharu a chance to remind us how awesome she is (answer: SO awesome) when the Moonies get tangled up and she has to face down the Lemures alone. Everyone’s screaming at her to run and save herself, but Miharu’s got more guts than slaughterhouse (gross! I regret this turn of phrase!) and she faces down the monster on her own. She realizes that sometimes problems require more than just brute force to solve, and so she releases her sword, sending it soaring across the clearing and bonking Ayatoriko right between the eyes. 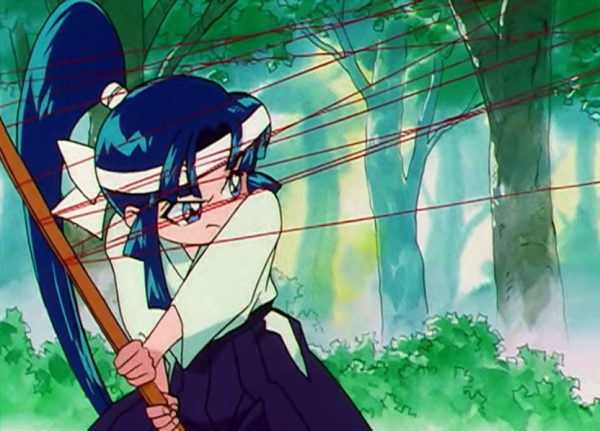 There’s a “tangled web we weave” quip in here somewhere, but Miharu is FAR too serious for witticisms.

With the monster Staged Out, it’s time for the family reconciliation. Miharu shows her mom that she’s learned how to be a tricksy hobbitses, vowing to be a well-rounded warrior from now on. I guess it’s not a bad ending. It would’ve been better if AkiMama had apologized and Usagi hadn’t declared her a “wonderful mother” because, um, no, but it’s not bad. At least the show didn’t seem to actually agree with Tiger’s victim-blaming nonsense, and Miharu proved she’s a really cool character who can fight through crappy situations with strength and positivity. I like her a lot. I just wish she’d gotten a less creepy story line to travel.

The Sensei Next Door: Samurama Edition

Tiger and Miharu were rattling off some rapid-fire references and terms that’re fairly common knowledge in Japan but may not be for you, so just in case you were curious: