I’m not as cold about this winter season as I worried I’d be, but…

You may have noticed the distinct lack of “Rule of Three” posts over the last week, and there’s an odd reason for that. While I’m still watching way too many shows, and still enjoying them for the most part, there’s surprisingly little to actually say about them. With a few exceptions, this is a fluffy (or maybe “trashy”) kind of season, more entertaining than expected but difficult to review because a lot of it boils down to “it’s fun and I kinda like it.”

So rather than force myself to find 2-4 paragraphs worth of things to say about 10 new series (sequels don’t get Rule of Three Reviews), I figured I’d just write 1-2 about each of them. Digest post, go!

I actually do have a lot to say about this excellent series, which is why I’m covering it over at Anime Evo. You can go there for general thoughts and some spoilery discussion of the first three episodes.

Like Showa Genroku, ERASED is one of very few series getting across-the-board positive comments from ani-reviewers this season, and I’m right there with them but for a few reservations. Don’t get me wrong, it’s a good show, with careful cinematography and shot selection, convincing vocal performances, a smart use of angles and music to create tension and a sense of dread, and a willingness to explore both complex topics (the mistakes of the past) and difficult ones (child abuse).

But it’s also not doing anything particularly new or different (even its splashes of red on the “endangered” characters are, while effective, not exactly novel), and I can’t help but wince at the central conceit of the “boy using special powers to save doomed women.” Right now it’s extremely well-made without being at all surprising. I’ll keep watching regardless, but I do hope it goes in some unexpected directions so I can sing its praises rather than just chat casually about them. 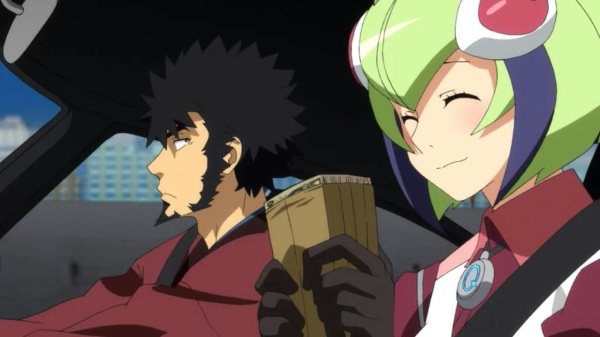 A sci-fi action series about energy monopolies and reality-warping dimensional coils starring a grumpy Luddite with a war-torn past and a cute robot girl? Yeah, I reckon I can watch that. Like Erased, it’s not so much that DimW is doing anything new so much as it’s crossing well-tread territory with sure footing and a nice sense of style. The world is ripe for commentary about privatization and corporate corruption, and I’d love to see DimW dig into that some. But even if it doesn’t, if it can keep developing its cast while being entertaining, a little funny, and a little sad, there’s a good chance I’ll stick around to enjoy the ride.

If my Twitter feed is any indication, I’m the only person actually watching GBtW, but light fanservice aside, it’s one of the shows I’m most enjoying right now. I like hanging out with the cast, the humor generally works for me, and I appreciate the way the series balances parody with sincerity, poking affectionate fun at geek culture and dating sims while also applauding fans for their passion and acknowledging the importance of that passion in the creative process. How the series handles its “success” vs. “fun” conflict will have a strong effect on my overall opinions of it, but as long as Andou keeps getting great lines like this, I’m happy to see where it goes.

I never look forward to this one but I always enjoy it while it’s happening. It’s a straightforward, almost “family friendly” adventure series about scrappy kids and separated families, and the friction and vinegar between the central cast keeps their interactions from feeling stale. The creators seem to have a good grip on their world and extensive time line, and while I may not be riveted I am curious to see it play out. Clunky CG characters aside, this could be another fun series with a good heart, and sometimes that’s all I need in my anime.

I would unapologetically love this series if it weren’t for the bursts of melodramatic cornball dialogue (which I’d like to pretend is intentionally bad, but almost certainly isn’t). As it is, I still really like it, but slightly apologetically. It cares about its characters, fighting to give them all back stories and personal conflicts, and when the writer isn’t wallowing in half-baked philosophical musings, the dialogue has an easy flow that establishes relationships and makes me wanna root for the cast. Episodes move quickly, character designs are sharp and recognizable (albeit absurd), and I confess to being curious about the true nature of this  “divine gate” everyone’s after.

Mostly, though, I just can’t shake the sense that there are good-hearted, well-meaning people clumsily but passionately making this sucker. Yes it’s earnest and cheesy and overly complicated, but dangit, I like earnest and cheesy and overly complicated. The charm of its dumb sincerity may wear off, but I suspect I’ll be half-guiltily watching this one to the very end.

Despite Director Ishizuka’s best attempts to inject this one with bright colors, sharp angles, and a sense of energetic style, the PoSA script is mighty flat, doing little to establish its characters beyond a few broad strokes and laboring painfully through most of its comical beats. I’m still here for two reasons: (1) I love the art design, and (2) the street races are great, freeing Ishizuka and the Madhouse staff from all that lackluster dialogue and allowing them to tell the story solely through visuals. I keep saying “I doubt I’ll watch the next episode,” but hey, I haven’t dropped it yet.

I so badly want to like Haruchika, but my overall opinion keeps being a resounding “meh.” It hurries through its stories too quickly for them to resonate (although the second episode did a much better job than the third), and while I like Chika’s straightforward personality and her friendly rivalry with Haruta, I’m having a difficult time really caring about her or the rest of the cast. Haruta himself is a particular pain point, as he’s able to solve problems so quickly and neatly that there’s no tension in the conflicts. It’s still in my queue, but if the pace can’t slow and Haruta doesn’t start developing some flaws, my interest will evaporate for good soon.

Grimgar of Fantasy and Ash (Hai to Sensou no Grimgar)

It’s a tale of two shows with this one. Good Grimgar is a quiet, melancholy fantasy slice-of-life. It treats traumatic events (such as taking a life) with the chaos, brutality, and horror they deserve, and has a good eye for the less glamorous aspects of Actually Living in a Video Game, like earning enough money to buy new underwear before your old ones fall off of you. The scenes between its male characters, particularly anything with Manato, carry themselves with intelligence, sympathy, and dignity. Good Grimgar is one of the best shows of the season.

But then there’s Bad Grimgar, which is pretty much anything involving the female characters and/or the misogynist ass, Ranka. The series just can’t seem to overcome its light novel roots, falling back into cheap fanservice, leering camera angles, sexist cliches, and bullshit “boys will be boys” hand-waving to justify attempted assault. There is less of Bad Grimgar than there is of Good Grimgar, and I really, really like Good Grimgar. But Bad Grimgar is just about insufferable, so if this nonsense continues next week, I can’t see me watching past that.

Active Raid is mostly fine: a little bit clever, reliably amusing, and willing to take its time establishing characters and building relationships. It’s also not much more than that. I get the feeling its the kind of “popcorn flick” action series that makes for a slow week-to-week watch but could be a fun binge, so I’m setting it aside for now and planning to give it another try at the end of the season. Maybe it will hold my attention more effectively then.