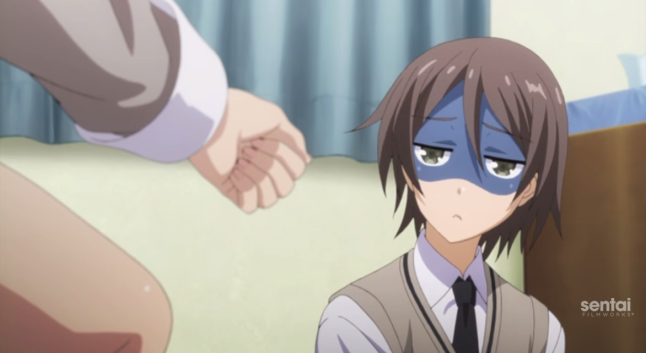 I’ve been buried under premieres for the last two days and am still not fully caught up (I do have to sleep and socialize and run errands sometimes, y’know!), but I wanted to give you something today, so lo, a trio of new shows. This season has been marked by middling premieres with sparks of potential, and so we see that again a little here. It’s also been marked by just plain old lackluster premieres, and so we  see that again here, too. Hit the jump for flickers and, er…not so much. 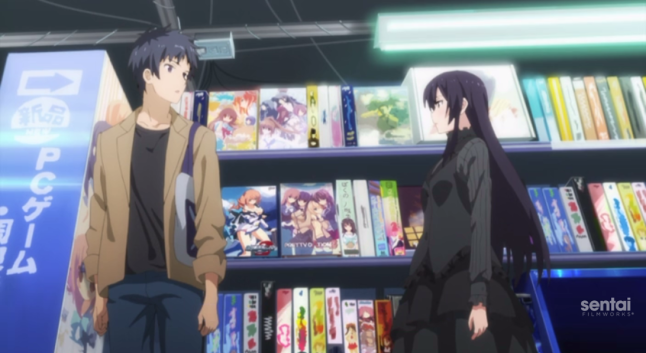 Studio: Project No. 9
Based on: The visual novel by Romeo Tanaka (Humanity Has Declined, Rewrite)
Streaming On: Hulu

In a Sentence: Amateur writer Hojo Buntaro shifts from drama club scripts to games when classmate Kuroda Sayuki asks him to help her make a dating sim.

How was it? Charming if not a little slow out the gate.

Overall
This premiere is more prologue than proper story, establishing personalities and relationships and walking us through a “day in the life” of our observant, helpful, but aimless protagonist. There’s a slice-of-life feel to it, meaning it’s more about enjoying the cast than the story itself, and so far it’s accomplishing that through a variety of interactions (close friends vs. classmates vs. potential dates) and dialogue that stands out thanks to a combination of offbeat humor and well-established characters.

In all honesty, I’m not sure if I’m giving this one a full meet ‘n’ greet because it deserves it or because I’d feel bad having a post without any meet ‘n’ greets. I’m largely sticking around because I have faith in the original VN writer, Romeo Tanaka, whose light novel series Humanity Has Declined was adapted into one of my favorite anime comedies. No, GBtW didn’t knock me out of the park, but it has enough charm and potential for me to give it a chance. I’ll be back for a couple more, I think.

Stitched together out of the skins of older, cleverer magical girl series, Komugi is remarkable in how unremarkable it is. Pop idols, clumsy-but-well-meaning protagonists, perfect best friends, and animal companions (named “Usa-P,” for heaven’s sake) have been done an awful lot at this point, and Komugi doesn’t have anything new to add to the conversation. Even it’s sense of humor feels lifted from other shows, but without any real passion or sense of comedic timing. If you need to scratch your magical girl or idol show itch, there are far more memorable shows out there to do it for you.

The Internet seemed to like this one a lot more than I did, so maybe I’ll give it another try if I hear good things about future episodes. For now, though, all I saw was another needlessly complex premise crafted as an excuse to give teenagers temporary superpowers and throw a boy into a harem situation. The idea of a “retired” protagonist dragged back into the fight has merit, but this action-heavy episode didn’t do much in its execution to provide more of a hook beyond that. Plus I’m fully maxed out on cutesy little sisters. Just nothing here to appeal to me, I s’pose.