Fairy tale retellings sure can lead to some thorny situations.

Apologies for the delay—I had a whole mess of season- and year-end posts to tackle this week, so I took some time off to keep my brain from blowing a fuse. I’ll be back to posting on Fridays again this week, and as always, if there are delays or schedule changes, I’ll be sure to let you know on Twitter.

Our season-opening arc keeps blazing forward, building to a(nother) showdown against our Big Bad, but that doesn’t mean Stars has no time for character growth. This week turns the focus to our Moon Defense Squad, integrating the outer guardians more thoroughly into the group and pushing the inner guardians into their roles as confident warriors with their own unique strengths. It’s good stuff. Er, except when it isn’t. But we’ll talk particulars below the jump.

Just when you thought things couldn’t get worse, Chibiusa had to go and start phasing in and out of existence. Yup, the situation is so dire that Sailor Moon is actually worrying about time paradoxes now! Well, Usagi’s not about to take this lying down. To Nehelenia’s realm! On her… own?

The rest of the guardians (including the flickering Chibiusa) hurry after her, but Nehelenia disrupts their Sailor Teleport and the gals are scattered to the four corners of her nightmare realm. I think we’ve all seen enough serials to know what that means: Time for unlikely pairings to encourage group unity and individual growth!

While Usagi wanders a frozen wasteland barefoot, Haruka and Ami (dream team!) wake up in Greco-Roman ruins. Haruka’s response to everything is “chase it till it stops running and punch it till it breaks,” so she takes off searching for an exit. Ami thinks about how she was always too busy studying to play sports, and struggles to keep up with her.

Haruka’s strategy proves lacking, though, when they run around in circles exhausting themselves and “Nehelenia” shows up to take them out. Okay, Sailor Uranus! You’re the older scout. Neither running nor punching has any effect. What’s next?

What’s next, gang, is an adorable flashback to Li’l Coach Ami drawing up the perfect play and leading the girls’ basketball team to victory! She remembers to fight “her way,” which is by using logic and SCIENCE!, finding the enemy’s weakness and pointing her damage-dealing teammate right at it.

In retrospect, I really should’ve had a running “Ami Saves Your Ass With Science” Counter, ’cause we’ve gotta have a high tally at this point.

Ami realizes “Nehelenia” is an illusion when her hair doesn’t move in the breeze, then she pinpoints the source of the spell (with some help from Human Shield Haruka) and they shatter the nightmare around them. Go teamwork! …Except for the part where they’re so burned out that Nehelenia just freezes them in mirrors anyway. “E” for effort, I s’pose?

Meanwhile, Usagi continues to slowly freeze to death, Nehelenia encourages her to “feel my loneliness,” and Mamoru slumps beside the dark queen’s throne. (Still a step up from getting stabbed, though.) Also, Rei and Michiru are wandering a forest together. New pairings that definitely won’t end in mirror-capture, GO! 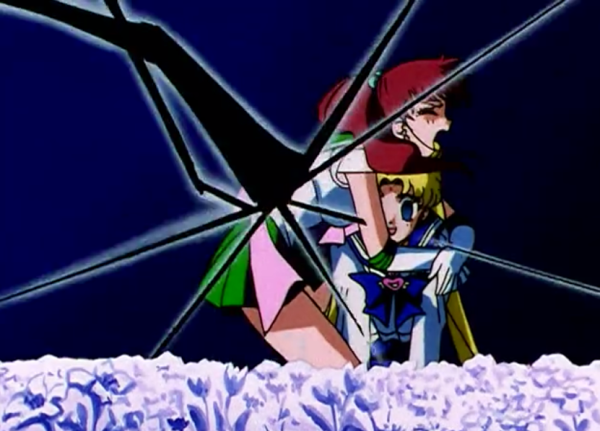 Elsewhere in Nightmare Land, Michiru is so chill and confident that even Rei defers to her divining skills. After some talk about their “difference in experience” (naughty Sailor Moon), the two run into their own Nehelenillusion, who quickly captures Michiru. But if there’s one thing we know about Michiru, it’s that she’s totally cool with dying if it means completing her mission, so she encourages Rei to Fire Arrow away.

After some hesitation, Rei remembers her promise to “protect.” She steels herself and lands a perfect shot, missing Michiru and shattering their foe. WOOHOO, GO TEAM GUARDIAaaaand they’re mirror-caught, too. Bully.

Minako and Doctor Puu are in the middle of their own glassassin fight. Puu reminds Mina that she is, technically, the leader of the inner guardians, even if that hasn’t been much of a plot point since…ever…so it’s important that she live to fight another day even if that means Puu has to sacrifice herself to make it happen. Mina kinda sees her point, but…

…but we’ll get back to them in a minute. First, Usagi has to stumble in the snow, where the blizzard gives way to a grassy meadow and OH CRAPBASKETS. FLOWEY?!

RUN, USAGI. HIS FRIENDSHIP PELLETS ARE A LIE.

Flowey and his pollinated pals encourage Usagi to “take a rest,” and she swiftly falls into a stupor, forgetting all about her boyfriend or buddies.

But while one blonde sailor ignores reality, another turns to face it. Mina realizes that a good leader leaves no woman behind, and so she grabs Puu and drags them both across the rickety bridge. Way to protect your teammates, Mina! Too bad the bridge snaps and the two plunge into their own mirror-prisons. Presumably all these newfound friendships and personal realizations are building to something, but the current ownage is undercutting it a bit.

Speaking of ownage, Makoto is about to own all y’alls when she stumbles across Usagi and tries to snap her out of her trance. Nehelenia sends in an illusion to attack her, and Mako is all “Bored now. JUDO FLIP.”

Sometimes I almost forget how much I love Mako, but she’s real good at reminding me.

When she discovers that she can’t kill the illusion, Mako turns herself into a human shield for Usagi, protecting her from Nehel’s attacks and urging her to wake up. Along the way, she snaps at Nehelenia that, no, Usagi isn’t perfect, but she “cheers everyone up” and “always tries to help others,” which makes her a person worthy of loyalty and protection.

All of which would be very moving and beautiful if Usagu actually woke the frack up during this speech, but instead she remains blissfully unaware until Mako finally collapses and one of her earrings falls off. Usagi sees the rose earring and… and…

…and it reminds her of HER BOYFRIEND. Not her BESTIE who just SACRIFICED HERSELF for her. NOPE. It makes her think of the masked dude who likes to chuck roses at people. THAT’S what motivates Usagi to shatter the illusion and climb Nehelenia’s thorny staircase. I’m all for miracle romances and saving the dude-in-distress and all, but at least let Usagi acknowledge what Mako did for her. Sailor Moon, I am disappoint.

Annoyances aside, the story surges forward, and Usagi’s got herself a long, painful journey to reach the castle where her boyfriend’s being held captive. Nehelenia’s pretty sure she’ll die before she makes it and is quite pleased with this latest fairy tale scheme… so pleased, in fact, that she completely forgets about the two pint-sized guardians wandering around her realm until they show up at her doorstep. And they ain’t here for no cup of sugar.

“I came here to kick ass and rescue princes, and fancy that: You’re in possession of both.”

I’d do what she says if I were you, Nehelenia. You wouldn’t like this one when she’s angry.