The Three Wise Men ain’t the only ones following Stars tonight.

I’ll be off holidaying it up with the family this weekend, hence why this post is going out a day early (my Noragami post may be delayed for similar reasons). As I mentioned last week, thanks to Viz’s awkward release schedule, I’ve got a whole trio of Stars episodes to cover this time around, and h’oh man, did this season waste no time in diving right into the fracas. Hit the jump to say hi to some old friends and some even older plot points.

Big changes are happening in the Mooniverse, although some are less magical than others. Our gals have at last made it to high school (and Usagi and Mina can finally run to class late with a friend at their side!), which opens up an array of new freedoms and responsibilities, from part-time jobs to after-school activities to, y’know, grown-up relationship stuff. WINK, WINK.

On the other side of Juuban, Li’l Hotaru (YAY!) and her dad (who’s been upgraded to Anime Hottie now that he’s no longer possessed by a SENTIENT UNIVERSE) are enjoying the cherry blossoms. But our harbinger of destruction senses danger on the wind, and a fellow outer guardian fresh out of Time Jail (YAY!) agrees with her. Looks like we’re stealing a baby again!

But all is not happy reunions and opening ceremonies. Up in the sky floats Nehelenia, content in her timeless prison until a creepy disembodied voice busts her outta the slamirror and shows her that, LOL, J/K, you didn’t get your revenge at all, those Moonies are just as alive and happy as ever!

Nehelenia’s so pissed that she RAGES her own Heart-Mirror out of her chest and then (at The Voice’s bidding) RAGES it into tiny shards, sending them down to the earth to jab into people’s eyes and fill their hearts with darkness. And if there’s folks getting stabbed with something, I think we all know who’s gonna join that party.

Still elsewhere (it’s a busy episode), Haruka and Michiru (YAY!) are being all cute on an aquarium date, at least until Michiru’s mirror starts acting up and they see the mirrorteor shower sailing in. One of the falling shards wedges into Haruka’s hand, so Michiru gets it out using a method recommended by 9 out of 10 anime doctors. 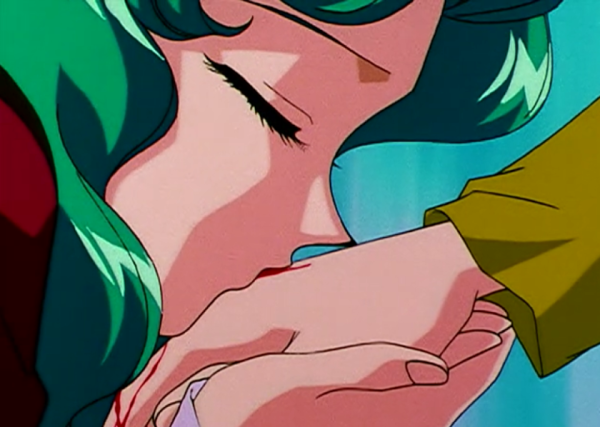 Once freed, the shard transforms and multiplies into a glass Nehelenia “Mirror Paredri” army. Transformation Time! And it looks like you’ll be getting an assist from Sailor Pluto, too! Doncha just love getting the band back together again?

The Paredri are persistent little buggers, though, nearly throwing Haruka off a building and attacking Li’l Hotaru (Doctor Puu naturally brought her defenseless companion into battle with her, because Time Lord). Which is right about when our last guardian decides she needs to keep pace with the rest of the scouts and do some growing up of her own.

Still had time to get a decent haircut along the way, though. Priorities.

She’s full of visions and vague prophecies, and it all points to one person: Sailor Moon. Reckon it’s time for the outer guardians to come out of retirement.

Now that Usagi’s in high school, she’d like to upgrade from furious hand-holding to furious dry-humping, but Mamoru’s too busy dealing with the shard the Snow Quee—I MEAN, Nehelenia—jammed in his eye to think much about canoodling. He’s listless, distracted, and really has it out for balloons. Convinced he’s sick, he excuses himself, leaving Usagi to worry and talk it out with her gal pals.

On the other side of town, a new family is forming among the outer guardians. Hotaru’s growing both physically and mentally at a surprising rate, and is even getting in touch with her Sailor powers, using them to create her own miniature universes.

OH GOOD, A TINY UNIVERSE, THAT HAS NEVER ENDED POORLY FOR YOU OR YOUR LOVED ONES BEFORE.

Haruka muses on “Fessenden’s World,” an SF story written by Edmond Hamilton about a man who creates a miniature universe and then starts toying with the planets and life-forms that develop within it, sometimes destroying entire worlds just because he can. It’s not what you’d call a feel-good story, but Haruka takes some comfort out of the idea that, because human life is so fleeting, sadness and pain too are temporary, “illusions.”

As night falls, Mamoru moves from balloon to laptop abuse, and Hotaru receives a visit from both Nehelenia and Sailor Saturn’s spirits. Shit’s getting real and Saturn doesn’t have time for this 15-episodes-to-get-to-the-plot nonsense, so she awakens Hotaru’s memories and ages her back to where she was before her rebirth. Also, MOAR prophecies! Let’s go save the Princess!

Back at Rei’s Shrine, Sacred Mirrors are losing their marbles, and the Moonies are under attack from their own squadron of Glassassins. Despite his ongoing war with balloons and laptops, The Tux shows up to lend a hand, but HE’S NOT STANDING POISED ATOP A TALL STRUCTURE? 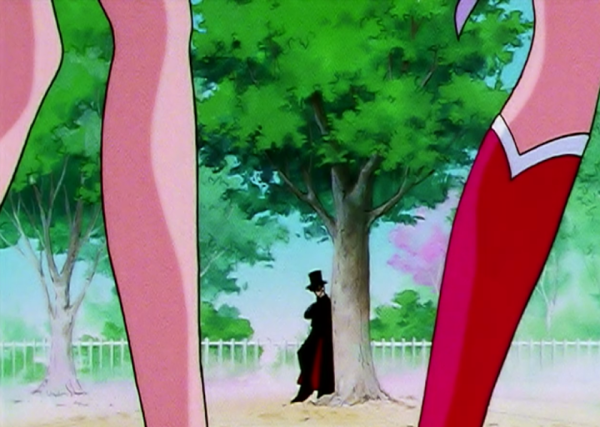 Is…is he dying? ARE YOU DYING, MAMO-CHAN?!

The outer guardians arrive to pose and toss around catchphrases, and Hotaru comes face-to-face with her old bestie again (“So what’ve you been up to, Chibiusa?” “Well, I dated a magical flying dream horse for a while…”), all of which would be very touching if the Moonies weren’t in the midst of being strangled by Paredri. A, uh, little less monologuing, little more spell-slinging, if you please?

The whole team combines their powers to summon Eternal Sailor Moon, who trades in her cool staff for another healer’s rod (meh), adds even fancier wings to her costume, and unleashes ALL of the Moon Disco Power, vaporizing the Paredri. But as awesome as it is to finally have enough Moonies to start a baseball team, there’s a huge shadow looming over this reunion, and she’s got her claws sunk deep into The Tux’s dapper chest.

A strange illness is sweeping Juuban, characterized by listlessness and extreme fatigue. Normally I’d say the city had come down with a nasty case of the vampires, but the afflicted people’s obsession with mirrors points to a slightly different supernatural force at work. (Interestingly, more women have been affected than men, but given how the guys are identically affected, this likely has more to do with social norms—guys being less likely to carry compacts, therefore having less contact with mirrors and falling under the spell more slowly—than with any overarching gender commentary.)

Usagi sees a golden glow in a “sick” student’s eye and remembers seeing the same thing with Mamoru. She hurries over to check up on him, but he’s finally come to realize what every character on this show has been saying for 169 episodes: DAYUM, he fine! 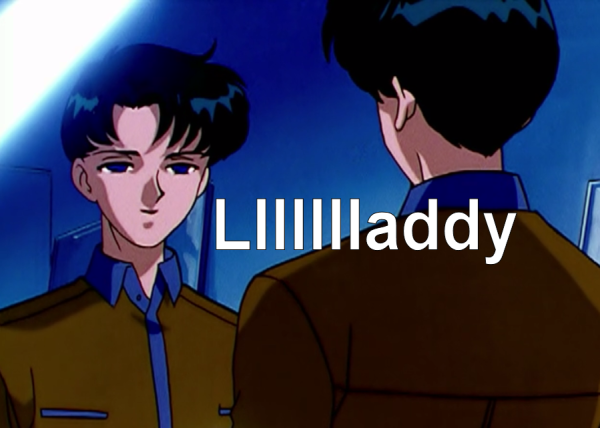 Dude won’t leave his hawt reflection, and snaps at Usagi when she tries to pull him away from his Mirroroom. She respects his request for privacy, but doesn’t hesitate to share her fears with the rest of the Moonies. Our team finally, FINALLY puts four seasons’ worth of crime-fighting to use and draws some quick lines between the mirror-monsters and the mirror-illness, and Usagi even connects the shadowy figure to Nehelenia herself.

While the outer guardians take care of another Peredri Parade, our main team rushes to Mamoru’s aid, only to find him knee-deep in mirrors and uninterested in being saved. Nehelenia shows herself so she can curse Sailor Moon for “laughing at her” and gloat about her upcoming victory.

Then, nefariously as you please, she drags Kay—I MEAN, Mamoru—through the mirror and into her own realm, assuring Usagi that he will be “completely under her control” by sunrise. Usagi can’t hold her Eternal Moon form long enough to attack properly, and Nehelenia saunters off into Mirror World, dragging her dude-in-distress along with her.

Man, three episodes in and Mamoru has already been stabbed, brainwashed, AND kidnapped again. If we were playing the Sailor Moon drinking game, we’d all be dead by now.