Give me something to sing about~ ♪

I knew nothing about either of these series and was expecting even less than that, but both have managed to hook me with a hefty dose of the ridiculous. Although, arguably, that’s only intentional for one of them. Read on to learn about fall’s surprise guests, and to hear why both have managed to sink their silly hooks right into my heart.

I have zero knowledge of the original manga and anime that this series is honoring, but it doesn’t seem to matter, because the show’s sense of humor has aged it nicely into the modern era. Loosely, Mr. Osomatsu is about identical sextuplets, now young adults, struggling to make ends’ meet in the real world. The series does a smart job of establishing each brother’s distinct personality and vocal tics, making it easy(ish) to keep track of who’s who even if you’re not familiar with the source material. There are also a number of side characters who, while a bit more hit and miss than the core family, provide bizarre skits and conflicts that keep each sketch separate from its buddies.

Really, though, Mr. Osomatsu‘s job is to make you laugh, and for me it does that exceedingly well. Running the gamut from highbrow to lowbrow humor (the second episode skewered soulless corporations and the idealization of familial love, while the third episode was awash in slapstick and dick jokes), the series bounces from sketch to sketch with a nod and a cheeky wink like a Japanese, PG-13-rated Animaniacs. It doesn’t always hit, but when it does it’s downright hysterical, and easily the happiest surprise of the season thus far. There’s no proper plot or character development, so my investment in the series is going to be in how well it makes me chuckle, but so far, so good. Here’s hoping it can keep it up. 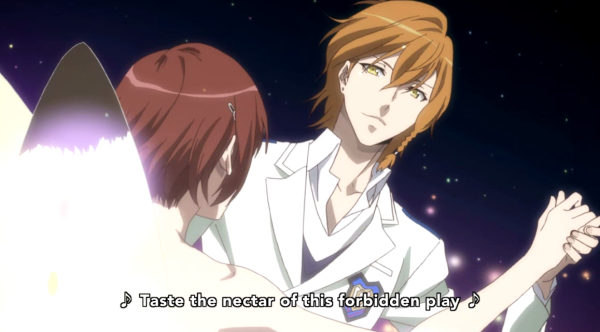 This is either the most or the least self-aware series in history, but either way, it’s pretty incredible; an awesomely bad shoujo MUSICAL! that’s just ridiculous and campy enough to work. Unlike our recent string of shoujo anime, this is in no way a “good” series, or something the audience should seek to emulate. The female protagonist is a passive ball of bland who gets bounced from one creepy, seductive, possibly-literally-a-demon “love” interest to the next, all of whom are interested in her for reasons unknown, and all of whom (with the possible exception of Rem, and maybe also the dog) she should run from screaming.

The thing is, none of that seems to matter, because Dance with Devils is so committed to the absurdity of its premise—singing, dancing, supernatural bad boys trying to obtain a legendary grimoire from a self-proclaimed “ordinary girl” and her exorcist older brother—that it’s impossible to take any of it seriously, or to even think that the creators want us to take it seriously. Despite its frequent forays into boring and trite “romance,” there’s an escapist charm to the silly spectacle of it all, a giddy enjoyment to watching a bunch of over-the-top jerks duke it out via Gothic-inspired musical numbers. What can I say? It leaves me with a big, dumb grin on my face. As long as that keeps happening, I see no reason to stop watching.