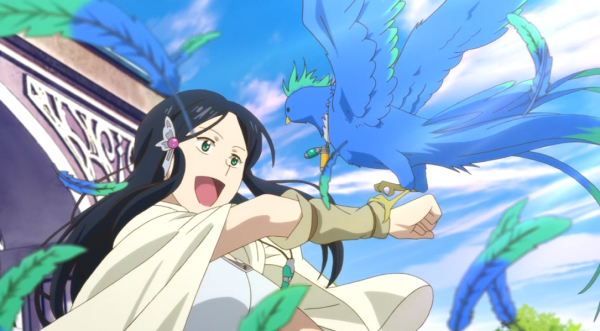 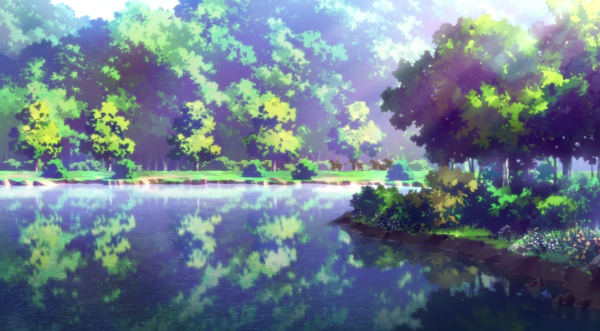 Since events among our central cast have settled into peaceful routine again, it’s time to bring in some new characters. Enter Kihal Toghrul, a young woman from a remote island who’s come to petition Prince Zen. The local noble, Viscount Brecker, has taken to hunting her island’s bird population for their valuable feathers. The bond between Kihal’s people and these birds is commercial as well as emotional, so she’d like to have Zen declare them a protected species.

Given Brecker’s scornful attitude for the people under his command, it’s unsurprising that Kihal has nothing but distaste for the nobility, and confesses to Shirayuki (with whom she bonds immediately) that she doesn’t actually expect anything to come from the meeting. Shirayuki worries this may be true, although not for the same reasons—she knows Zen will want to help Kihal, but can’t legally do so unless he can prove the birds are useful for the kingdom at large. And so Shirayuki hatches a plan: If they can use them as messenger birds, then Zen would have a politically sound reason to protect them. And so it’s time to put Kihal’s friend Popo to the test! 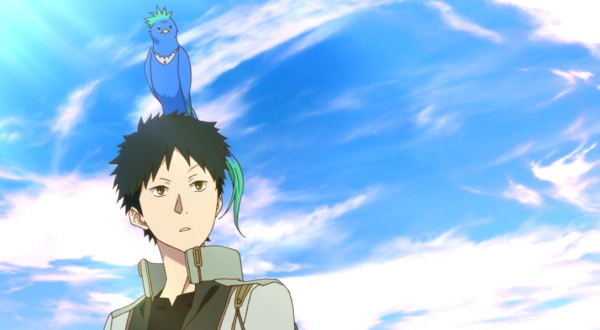 Okay, so he’s not as cute as a certain binge-eating squirrel, but as far as animal mascots go you could do a lot worse.

The test may be for Kihal and Popo, but it’s Shirayuki herself who really shines. Brecker quickly connects her red hair to the rumors about Zen’s “friend” and insists on accompanying her to the watchtower. Zen has his suspicions, but one beautiful look and nod between him and Shirayuki and he allows it, trusting Shirayuki to handle anything Brecker might throw her way. These two have always had faith in one another, but it’s a delight to see that bond now goes as deep as simple, wordless gestures. 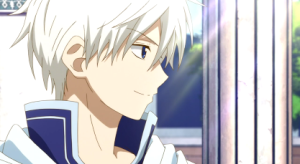 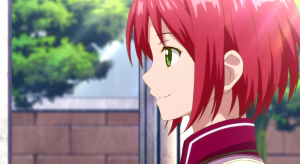 Once at the watchtower, Brecker immediately attempts to use Shirayuki’s precarious position within the palace as a bargaining chip, offering to “support her” as a noble sponsor of sorts in exchange for making sure the test fails. This isn’t the first time social hierarchy has served as the central theme/conflict of Snow White, but it is the first time anyone’s tried to pit Shirayuki’s integrity against her personal desires, making it all the more impressive when she turns him down without hesitation.

Even Brecker’s more forceful methods won’t deter our plucky protagonist. Shirayuki continues to demonstrate remarkable insight and pragmatism, acknowledging that, no, Zen couldn’t publicly take her word over that of a viscount. As with the birds, she understands the complexities of the political system and doesn’t resent Zen for having to work within it.

Instead, she finds a way to keep him from having to choose between personal want and public responsibility altogether, risking her safety to ensure the test is a success. And, of course, it is, although not after some genuine uncertainty (and some slightly confusing back-and-forth time jumps), as Snow White proves itself capable of generating tension almost as well as it does coziness.

Sometimes you watch a shojo & have no idea why everyone loves the MC. This is not one of those series #akagami_anime pic.twitter.com/l7hP4DzEdl

Fitting for an episode about social hierarchy and the vast gap between commoners and nobles, this week’s imagery was all about height, demonstrated by tall towers, deep waters, and birds flying across the sky. In a clever touch of cinematography, the camera took care to show our birds from above and below, demonstrating how different the view looks from these two angles—and how you can see certain things from one that you can’t from another.

We then immediately shift to Shirayuki looking up through the greenhouse at the birds, considering Zen’s predicament and finding a solution that he (from his higher angle) couldn’t see on his own. (Brecker even explicitly remarks on this, although naturally he can only see the benefits of his “high” position rather than acknowledging the unique perspectives of both.) 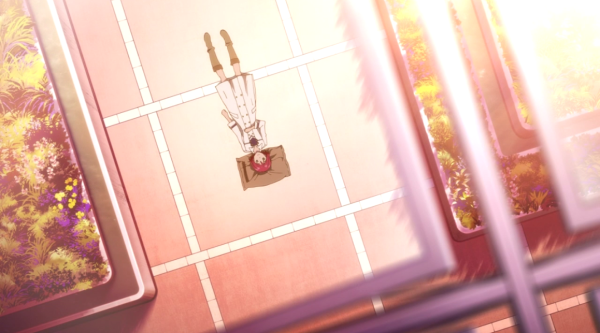 “I spy with my little eye a visual motif.”

What we’re seeing this week, I think, is a hint of the “answer” Shirayuki may find in terms of figuring out what her true “value” is within the palace and to Zen personally. Her close relationship with Zen, combined with her current palace job and her past as a commoner grants her a unique perspective, one that’s able to shift from “high” to “low” and back again, seeing conflicts from multiple perspectives and thus able to find solutions others can’t see. She serves as the bridge between Zen and Kihal this week, befriending and empathizing with both, and those twin friendships allow her to find a path that helps Kihal and works for Zen both politically and personally.

I chuckled to myself this week when Shirayuki once again jumped out a window (echoing her escape attempt from Episode 2), but I don’t think it’s any accident that this is becoming a recurring action for her. People with power keep slamming doors in her face, and so she has no choice but to find an alternate route. It’s that cleverness and creativity (and willingness to act on it) that makes her such an impressive protagonist, and proves that she’s much more than “just” a capable herbalist-in-training. 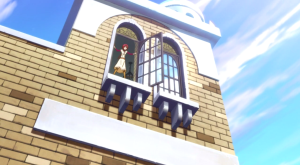 I would, of course, be remiss in finishing up this post without mentioning That Ending. Like the rest of the episode, it was pretty much perfectly directed and beautifully staged. I was shouting “KISS HER” and then he did and then I made a bunch of incoherent squeeing/choking noises and flailed around my living room for a while. Always a good sign, that.

It couldn’t have happened at a better time, too, coming on the tail end of so many examples of why these two are so great as individuals and for each other: Total trust, honest communication, a desire to help others, and the smarts to do so successfully. That she straight-up tells him she did it to protect him from having to choose between what Zen the person wants and what Zen the prince needs to do—a balance he’s struggled his entire life to maintain—is just the icing on the romance cake. Hell, I wanted to kiss Shirayuki at this point. 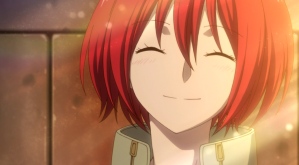 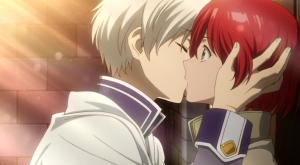 Now the big question is how Shirayuki will react to this. It’s pretty clear she cares for him, too, but it’s also clear that the gap in their social positions weighs heavier on her than it does on him. In purely practical terms, striking up a romantic relationship with the prince would only make her situation in the palace even tenser and more dangerous.

It was smart of Snow White to wait this long to forward the romantic elements of its central couple, as we at home now have a much clearer idea of the sorts of obstacles that could stand between these two. There are definite barriers here, no question. But then, Shirayuki and Zen have always been pretty good about working around those. I’ll be curious to see how they both decide to approach the relationship now that their (or at least Zen’s) feelings are out in the open, and how that change will affect the series as a whole.