Facing your fears is hard. Facing your idols is darn near impossible.

We pick up right where we left off both in terms of story and visuals, as Shirayuki pretty literally climbs a barrier to reach Zen, and the two renew their promise to stick by each other regardless of what others (even the crown prince himself) may think about it. I’m glad last week’s “cliffhanger” ending turned out to be a big tease, because anything less than direct communication would’ve seemed just plain out of character for these two.

Their relationship continues to be wonderfully comfortable, almost casual, filled with little gestures of physical affection and defined by their honesty with one another. Snow White‘s romance doesn’t have the high “squee” factor that a lot of shoujo do, but that just makes it feel all the more solid and real, a bedrock upon which both characters can plant their feet even when the world around them is fraught with tremors.

Of course, for all that I talk about how steady and cozy their “romance” is, Snow White reluctant to say in actual words (whether spoken or internal) exactly how these two feel about each other. Mind you, this is partly due to FUNImation’s at times frustratingly clunky translation (really the only rough spot on this polished production), but the couple themselves make it a point to avoid labeling their relationship as well.

Despite the lack of explicit verbal definitions, it’s impossible for me not to consider this a “romance” because the series does such a fantastic job of using visual cues and subtext, allowing us to glean their feelings through what isn’t said rather than what is (such as Shirayuki being unconcerned about the “fiancee” gossip), as well as through external signals (such as all the frequent, casual physical contact). Granted, since these moments normally take place in private spheres, it’s understandable why the rest of the palace is so uncertain about their relationship at this point.

Dude, are we even watching the same show?

In fact, if this week had a particular recurring theme (other than the obvious “don’t be afraid to stand up for what you believe in”), then it’s probably that idea of uncertainty, and how real people and their relationships rarely fit into neat, easy-to-understand categories. We see a lot of this (and the conflicts that come from it) during our main story this week: Izana and Zen’s shared history, and how that past affects both Izana himself as well as his interactions with his brother.

The good news is that this isn’t a fraternal relationship built on malice. The bad news is that neither seems too sure what it’s built on these days. Zen’s flashback gives us two major insights: (1) Zen has tremendous respect for his brother and his handling of the kingdom, and (2) Izana has always been a true politician, oblique at best and downright inscrutable at worst. So Zen’s uneasiness last week wasn’t about fear, really, but rather a desire to both please his brother and figure out why he spent so much time passive-aggressively attacking Shirayuki. 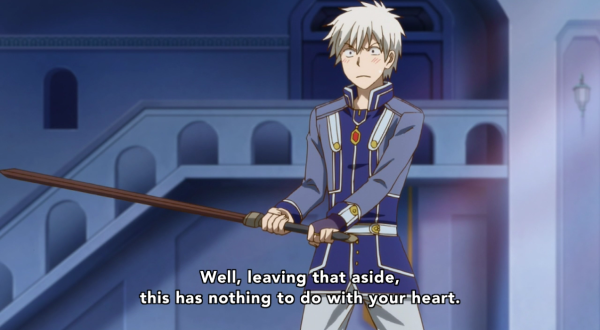 Rather than swordplay, perhaps Izana should help Zen work on his poker face.

Partly thanks to his conversation with Shirayuki, Zen finds the courage to confront his brother and get some straight answers. The story here is about what I figured: Izana’s worried about Zen’s public image and how neighboring kingdoms will view his relationship with an “exotic” foreigner {insert commentary about reading Shirayuki’s hair as a racist, classist, and/or sexist metaphor here}. There’s a kind of “I’m doing this for your own good and you’ll thank me later” quality to Izana’s meddling, and given the large gap in their ages (and apparent absence of parents), it makes sense for him to act the way he does.

That doesn’t make his manipulations okay, though, especially now that Zen is an adult himself, and an awesome one at that. While the moment is downplayed (as most moments in this show are), it’s huge for Zen to stand up to the man he’s idolized for so long and remind him that he’s capable of making his own decisions and knowing what’s best for himself. This more than anything, I think, earns Izana’s grudging respect, something we see play out in the episode’s final confrontations.

Oh Raj, honey, I have some bad news for you.

Snow White brings us back around to the beginning of both this arc and the entire series in its final moments, as Shirayuki comes face-to-face with Prince Raj, the (first) man who tried to rob her of her freedom. While it’s clear she’s still disgusted by him, she demonstrates her own growth by not only saving his idiotic life, but telling him (politely, ’cause royalty) to stop screwing around and do good by Tanbarun. Shirayuki’s never been a total pushover, of course, but she’s grown more confident in herself and her own strength, and it shows in this meeting.

Surprisingly(?), Raj seems to actually take her words to heart, as he demonstrates respect to his hosts and leaves with Shirayuki still very much on his mind. Maybe one day we’ll see that bear fruit. Fukuyama Jun and the BONES animation team have made Raj far more entertaining than he has any right to be, so I certainly hope we haven’t seen the last of the little idiot. 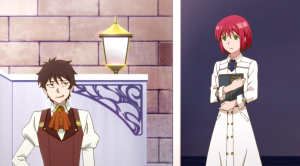 We’re running low on run time, so our sneaky crown prince conveniently sees Shirayuki save Prince Dipshit, and takes the moment to (subtly, ’cause royalty) tell her to get the hell out of Clarines. This time, though, she meets him head-on and refuses to back down, announcing in no uncertain terms that she’s here to stay.

Izana’s response is… well, very Izana-like, which is to say who the hell knows what’s really going on under that vaguely mocking smile. Still, by kissing her on the forehead and calling her “princess” it seems he’s acknowledging her, at least slightly, in the same way he acknowledged Zen by complaining about his impudence.

“Have fun staring at the ceiling tonight wondering what I mean by this, trollololol~ ♪”

Because Izana is an enigma wrapped in a mystery wrapped in a fancy coat, I’m not sure if he orchestrated this whole thing to test their mettle or if he’d honestly planned to kick Shirayuki out. Either way, they’ve both held their ground, so he’s backing off for the time being. Given the amount of power he wields and how much respect Zen feels for him, that strikes me as an impressive accomplishment indeed.