And you thought your older siblings were bossy. 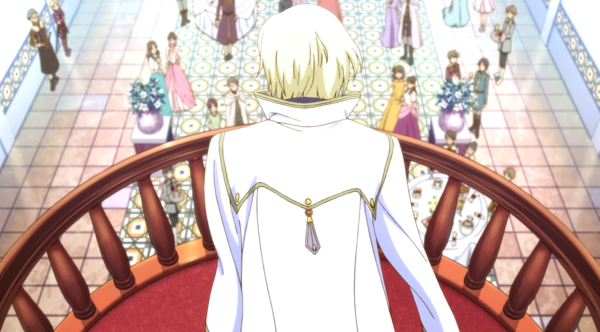 The crown prince is back in town, and he’s not at all happy with the state of the Shirayunion. His concern over his brother’s recent perceived dalliances leads to a series of confrontations and surprise meetings which shake Shirayuki’s confidence, leave the usually self-assured Zen off-balance and defensive, and provide our young couple with the first real challenge to their relationship.

Everything starts off all sunshine and rainbows, with Shirayuki officially settling into her role as a palace pharmacist and Zen finding himself adorably attracted to her new uniform. But things fall apart pretty quickly after that, as Zen’s authority in the palace is challenged, Obi is (sort of) attacked, and everyone winds up getting summoned to Big Brother Izana’s room at about the same time.

Izana (Ishida Akira, an industry stalwart who’s made his living playing inscrutable characters) spends most of the episode composed but faintly threatening, and always one step ahead of his brother. His motivations are still murky, so it’s hard to say how much of this is good old-fashioned bad blood between siblings and how much is genuine concern for the nation, Zen’s ability as a ruler, and the royal family’s public image, but he very much feels like a character who doesn’t believe he’s the antagonist. I’ll be curious to see how he develops.

“Your brother has also instructed us to give you five noogies, two wet willies, and one ferocious wedgie.”

In the meantime, he’s come back to criticize Zen’s leniency with the soldiers under his jurisdiction and to ascertain exactly what kind of relationship he has with this red-haired foreigner everyone’s talking about. When Shirayuki can’t give a proper explanation for what she’s able to offer Zen and the nation, Izana assumes the worst.

Like a true politician, his actual words are indirect and ambiguous, but it becomes clear through his actions (and, eventually, his reaction to Raj’s brash announcement) that he—and probably everyone else in the palace—believe Zen is sleeping with a commoner. So now Izana’s doing everything he can to drive a wedge between the two.

“Remember, Shirayuki: If he offers you a Hurts Doughnut, do not accept it.”

Izana serves as an abrupt wake-up call for Shirayuki and Zen, and forces them both to reevaluate their positions within the palace and their relationship with one another. While Shirayuki has been adamant that she earn her place at court through her own merits (and has done so splendidly), the truth is she and Zen have benefited from his status simply because there was no one in the palace who could order him to cut ties with her. Izana upsets the power dynamic, and both are keenly aware of that.

For Shirayuki, this new challenge means figuring out exactly why she wants to stay by Zen’s side (“‘Cause you lurrrrve him,” I sing at my tablet) and what answer she can give to justify her presence to keep herself safe from deportation and Prince Raj. Shirayuki is working through her own feelings of inadequacy and perceived uselessness this week, but she’s also fighting to maintain the personal agency she’s sought since Day One. The realization of just how tenuous her freedom is shakes her badly.

Clearly no one has told her the name of this show.

As for Zen, it means… well I never thought I’d say this, but thank goodness for that stupid, tactless, lecherous Prince Raj, who gives voice to what everyone else was thinking and finally clues Zen in on the public perception of his personal life. When forced to face those assumptions, Zen answers the way we’d expect him to: By explaining that Shirayuki is not a “kept” woman, that her presence here isn’t about his wishes, and that he has no intention of forcing her to do anything (and will stand by her if others try to do the same).

The trick now is convincing Izana not only that he’s wrong about their relationship, but about Zen and Shirayuki as individuals, two capable people with separate goals, desires, and the skills to accomplish them. It’s unsurprising that the crown prince wouldn’t think to take what Shirayuki wants to do into account, but he really should, otherwise this whole mess is going to get a lot worse before it gets better. 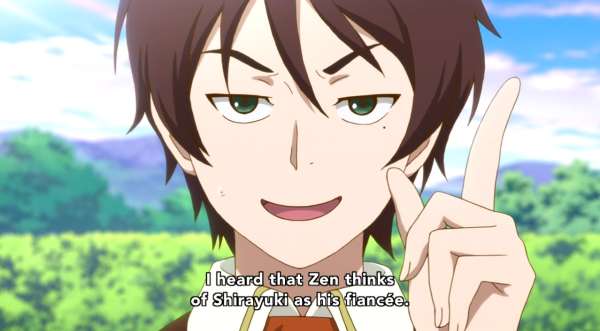 And meanwhile the whole thing is set to gorgeous orchestral pieces that build uncertainty, tension, and a rising tide of sadness while never losing the soothing, dreamlike tone that ran through the series previously. It’s the sound of reality intruding on our fairy tale, bringing with it the political concerns and social ramifications we thought this world and its two heroes were shielded from.

While I shouldn’t be surprised given how integral the score has been in setting the mood up to this point, it’s still beautifully done and worthy of, at the very least, that one paragraph of clumsy, gushing praise. Music is an art form that I simply don’t have the educational background to properly discuss, but it’s an incredible part of this series, and I adore it even if I can’t quite articulate why. 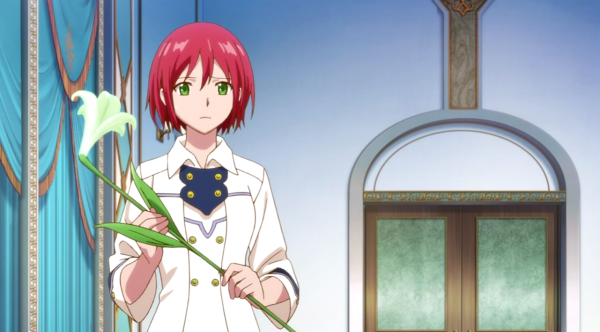 In terms of visual motifs this week, there’s two major ones, the first and most obvious being the white lilies that Izana presents to Shirayuki. As we learned this year thanks to Yurikuma Arashi, white lilies symbolize chastity and (primarily female) purity, and I can’t help but think this was a veiled insult on Izana’s part, suggesting that he, too, thinks Shirayuki is Zen’s mistress.

This episode is also lousy with walls in various forms (curtains, hedges, or barred gates), all of which serve to separate Shirayuki from Zen. It’s noteworthy that she’s always the one on the outside or in the private sphere, frequently in shade and alone or nearly so, while Zen occupies the public, sun-drenched, crowded spaces. All of which serves to highlight the isolation and vulnerability Shirayuki feels, as well as the sociopolitical barriers standing between her and Zen. 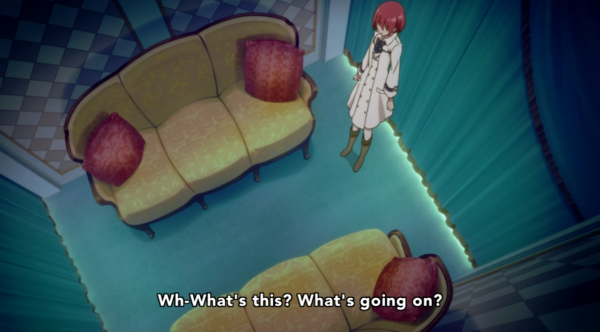 Of course, once Shirayuki makes her decision, she’s easily able to fling open the barrier and pass through it. But has her realization come too late? Zen is nowhere to be found, the shadows are growing longer, and we’ve run fresh out of episode minutes. Guess we’ve got no choice but to wait till next week to find out.

One thought on “Snow White with the Red Hair – Episode 6: “The Back Full of Meaning””