Are we sure this series isn’t listed as a bromantic comedy? 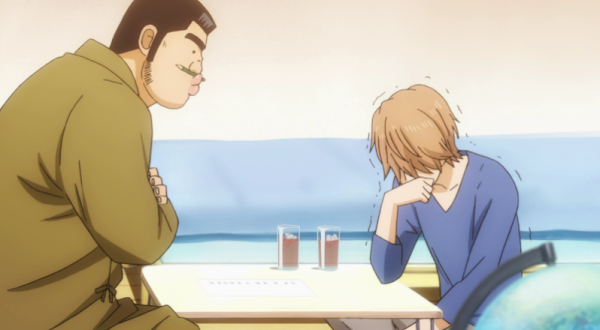 This episode began with me squealing about Suna earning a spot on the cake, and it just went downhill (uphill?) from there. I can chat all calm and measured-like about what happened this week in terms of plot points and character growth and thematic development—and, I mean, I will—but at its heart, OreMono is a sitcom, which means it isn’t about movement as much as it is about getting you to like its characters and want to spend more time with them and root your heart out for their happiness. And if there was any doubt that OreMono had succeeded at that, boy howdy, this episode sealed it.

That said, quite a lot does happen in terms of plot and character and themes this week, in that sometimes jolting, sometimes casual way that big news happens in real life. We begin with Takeo and Yamato on a park date, where she not-so-subtly steers the conversation toward birthdays and reveals that hers is a mere 10 days away. Takeo starts scrambling for a present, but Yamato says she just wants to spend the entire day with him.

I dunno, you guys. You think Takeo’s on board with this birthday wish?

So Takeo and Suna put their heads together to come up with the Best BirthDate Ever. Along the way, Takeo’s super-rad badass of a mom nonchalantly announces that she’s pregnant, Suna continues to excuse himself from events while his hair ominously shadows his eyes (Me: “Is someone dying? ARE YOU DYING, SUNA?!”), and Takeo gets a part-time gig at a macho bar to help pay for Yamato’s BirthDate.

Takeo’s pulling empathetic double-duty this week, as he works to plan the perfect day for Yamato and struggles to figure out what’s bothering Suna. Logicking through problems isn’t Takeo’s strong suit, but I will give him credit for good intuition: He may not know why Suna seems “off,” but he still knows something is wrong, and it weighs on his mind as much if not more than the BirthDate.

Thanks to GouMa (yes, that’s what I’m calling Takeo’s mum), the truth eventually comes out: Suna’s father collapsed, and is now at the hospital awaiting heart surgery. Since Suna’s mom and sister are overseas, he’s had to deal with this all by his lonesome. Oh, and the kicker: The surgery takes place on Yamato’s birthday.

Once Takeo finds out, he handles the news in beautiful Takeo fashion: By running next door, dragging the full story out of Suna, and immediately deciding that he’ll skip Yamato’s birthday so he can be with Suna during the surgery.

Now, if you’ll excuse me:

Suna’s having none of it, though—he’s seen how much Takeo’s looking forward to the BirthDate, and knowing he missed that would only make Suna feel worse. Takeo understands enough to agree to do what Suna wants, and the episode ends with him promising to spend the day with Yamato.

Then I pick my stomped and squishy heart up off the floor where OreMono left it and start using Leslie Knope Annjectives to describe Suna.

And once I finish doing THAT, I attempt to write something insightful. Mostly I just can’t get over what a great relatonship Takeo and Suna have here, and how glad I am to see it. I’ve mentioned in weeks’ past that Takeo has a tendency to take advantage of his friend’s kindness, so it was good to see a little more of a balanced give-and-take this week, not just because Takeo’s trying to help Suna, but because it’s becoming increasingly clear how much Suna enjoys Takeo’s company, too.

About the only time this week we see Suna genuinely smile (with sparkles, no less!) or laugh is when he’s with Takeo, either thinking about something goofy from their past (I so badly want to see Takeo go bowling now) or watching Takeo get all gooey-eyed about Yamato. As friends so often do, Takeo serves as a welcome escape for Suna this week, a break from the anxiety in his home life. Suna doesn’t emote much, but signs and hints (particularly when no one’s watching) assure us he’s getting as much out of this friendship as Takeo is—it’s just a little subtler, is all.

I don’t have a clever caption for this. I just think it’s a beautiful shot.

And speaking of that friendship, I’m once again leaning away from love triangle theories (and leaning somewhat futilely towards Suna being asexual, though I’d accept “really values his friends,” too). I don’t think you need to be a saint or even have romantic feelings for someone to enjoy seeing them happy, especially when it’s a close friend who’s all twitterpated and in a mega-cute relationship. The way Suna appreciates romance from a distance just rings very true to me, I s’pose, and I hope the series allows him to love Takeo and Yamato without being in love with either of them.

Of course, I’d like to see Suna receive some of that love, too. He’s quite the introvert, and I very much understand not wanting to bother other people with your problems (particularly when those people are your one escape from those problems), so it makes sense that he’d hide his father’s condition from his friends and all but demand Takeo not come to the hospital with him. Even so, Suna’s not made of stone, and we’ve seen ample evidence that this is wearing on him.

I’m not sure exactly how this mini-arc will resolve itself, but I have a hard time seeing Takeo (or Yamato, once he inevitably spills the beans to her) keeping their distance when their friend’s going through something like this. However they decide to handle it (hopefully finding a way to respect Suna’s wishes while also being the support/outlet he pretty clearly needs), I suspect it will leave us all in a puddle of friendship feels. That’s kinda OreMono’s M.O. at this point, after all.