We’re inching toward some kind of final confrontation, given the dropped plot crumbs and Galaxia’s increasing impatience. With just a single cour left I’m a little concerned we’ll be burning through story lines instead of stopping to smell the (probably literal) roses from time to time, but given all the new characters and murky motivations, I suspect it won’t be a boring final cour, at least.

For now, though, it’s one-part silly adventures, one-part power-ups, and all of it centers around The Littlest Bunhead. Chibi-Chibi is either going to be an impressive Mooniverse reveal or the convenient plot device that puts all other convenient plot devices to shame. Either way, I sure can’t call her inconsequential anymore.

Usagi’s HANGRY, but her mom didn’t leave out any snacks and I guess padlocked the fridge and cupboards?, so Usa’s SOL until C.C. decides to share her own snacks. But wait! Mama Tsukino didn’t put out those doughnuts and candies! C.C., have you been posing as an Oompa-Loompa and stealing from the Wonka factory again?

Hoping to solve the puzzle that is Chibi Squared, Usagi tails C.C. to see where the toddler goes when she’s left to wander the city alone all day (like toddlers do). C.C. frolics through traffic, meets strangers who tip their hats to her as if she’s the baker with her tray like always instead of an unattended toddler with the verbal skills of a Pokemon, and charms a dog who appears to have wandered in from a Looney Tunes short.

First the Moonies and then the Star Lights join Usagi on her quest. The gals do a real bad job of remembering that C.C. is supposed to be Usagi’s little sister (“Chibi-who-sa, now?” wonders Seiya), but those conversations will have to wait, because we’ve finally arrived at the fabled Candy Kingdom!

Actually it’s a giant mansion full of antiques run by an old man who lures children into his home with dolls and candy, OH GOOD THAT IS NOT CREEPY AT ALL. Instead of grabbing C.C. and running far away, the UsaGang sit down to drink tea out of mega-expensive cups (according to Local Appraiser Yaten) and marvel at the fact that an old businessman doesn’t know anything about a trio of pop stars. Yes. Because THAT is the weird thing about this guy.

After they leave, the AniMates attack, snagging the old guy’s star seed. Through a sequence of convenient backtracks courtesy of C.C., Usagi shows up in time to transform and deal with Sailor Antique, by far one of our silliest monsters.

Less creepy as a phage, TBH.

C.C. “helps,” but Sailor Moon’s too worried about the priceless antiques to do much fighting, at least until the Star Lights (who are just willfully ignorant about Sailor Moon’s true identity at this point, I mean C.C. is RIGHT THERE and you KNOW Usagi went back for her, so WHERE IS SHE IF NOT IN THE WINGED COSTUME GAH) arrive to assist and provide the somewhat melancholy moral of the episode: “All things eventually break.”

Although let’s not kid ourselves: The real moral of the story is clearly that no one in Juuban should be allowed to raise a child. 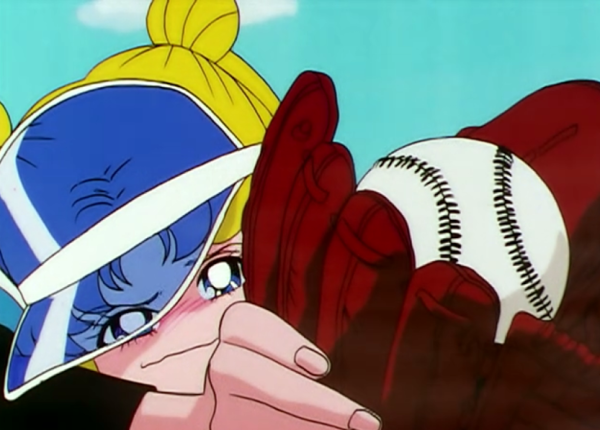 Sailor Moon has been a magical girl drama, a superhero caper, a YA rom-com, an absurdist farce, and a surreal mystery. But you know what it hasn’t been yet? A SPORTS SERIES.

Enter the school Sports Festival, where everyone’s expected to sign up and compete in an event. Minako and Taiki have volleyball, Makoto and Yaten have basketball, and our unathletic protagonist gets roped into joining the softball tournament with Seiya. Sadly we will see none of the other events, not even in still frames, but this has more to do with Plot than Shenanigans. Although there are plenty of those, too.

No one is having more fun this season than the Inner Guardians.

Our central conflict comes from Ijyuin Sonoko, softball star and leader of the area’s Three Lights fan club, who Doth Not Approve of Seiya’s romance with the clumsy first-year (Usagi replies: “We’re not a couple!”). So she offers Seiya a challenge: Beat me in the softball tournament and I’ll acknowledge your relationship (Usagi replies: “WE’RE NOT A COUPLE!”). But if you lose, you must cut ties with her… FOREVER!

Competitive as ever, Seiya accepts, and the two glare meaningfully at each other. Usagi replies:

But Usagi doesn’t like to lose, so she practices anyway. She and Seiya have a little bonding moment where they sit under the stars and talk about how there’s “the light of a star in everyone” and Seiya tells Usagi hers is extra-bright. Oh, pshaw. I bet you say that to all the girls you think are your princess.

We only have 23 minutes and a monster’s gotta show up at some point, so we skip the tournament and head straight for the championship game: Team Seiya Vs. Team Sonoko! It’s a defensive game with neither pitcher giving an inch despite Usagi’s right-field fumbles (bah, now I’ve got the Peter Paul and Mary song stuck in my head), but a sudden rainstorm forces them to take a break.

Sonoko runs into Usagi (who’s taking Helpful Plot Device C.C. to the restroom) and has a whole “oh-ho-ho-ho, I’m gonna hit the ball straight at you and win the game” gloat planned out. Usagi (awesomely) replies: “Yeah, I kinda suck at this game, so I might not catch it, but I’m still going to try my damnedest, for both Seiya and myself.” Respected Rival: Achieved.

Meanwhile over in the Battlestar Galaxia, Siren’s taking heat for not finding the true star seed. Concerned for her “rival,” Crow takes point on this mission, going after Sonoko and leaving Siren to follow a few steps back, which gives her time to see the tail end of the Sailor Moon transformation and realize that, WHAAAT, the magical superhero lady might have a true star seed? WHO’DA THUNK IT.

Usagi gets hit from both sides—Siren and the unintentionally punny “Sailor Leaguer”—until C.C. stumbles onto the field, touches the Moon Rod, and uses her magical plot device powers to not only don her own sailor suit, but also give Usagi one last Level Up before the series finale.

Siren’s still pretty sold on this whole attacking-Sailor-Moon thing, but when the Star Lights show up she realizes she’s outnumbered and retreats. And with that out of the way, it’s back to the really challenging stuff: Catching. A. POP. FLY.

And Usagi does! Her team wins, she’s the hero of the game, and absolutely everybody in school will soon be convinced that she and Seiya are dating. And if telling Mamoru that last part doesn’t get him to write you back, kid, then nothing will!