Good thing Snow White has a better sense of direction than Prince Raj does.

There’s an alternate universe where this is a terrible episode of anime, where Raj is an insufferable prig who tears at the comfy sweetness of Snow White like a cheese grater. Fortunately for us, we live in a universe with BONES animators and Fukuyama Jun, who know how to ride the fine line between annoying and hilarious with sympathy and wit. So, while this might not have been the most graceful or subtle of episodes, it still wound up being a pretty entertaining one. Sometimes it’s nice to live in this universe, doncha think? 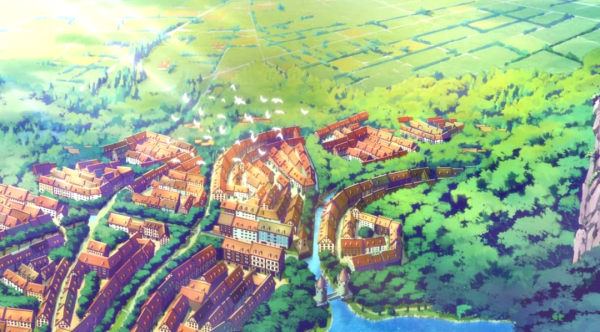 This week in diplomatic relations, Raj struggles to be a good host to his guest and fails miserably. His arrogance and bravado mask a deeply insecure and fearful, even paranoid, young man, and he’s as terrified of Shirayuki’s opinion as he is of how Clarines might react if this week doesn’t go well. Desperate to earn her approval, he offers to take her to the palace greenhouse, but the pair (and Obi) spend most of the episode wandering around lost in Tanbarun’s underground tunnels instead.

Shadowing them are Raj’s younger siblings, the twins Rona and Eugena, who have also inherited the family traits of impulsiveness and aversion to danger, respectively. In terms of plot, they eventually help the group escape, but more importantly they provide a sounding board for Raj to vocalize his (muddled) feelings about Shirayuki. They also give the audience a reference point, as Rona’s surprise at Raj’s apology tells us what we already suspected: It’s a long, slow process, but he really is trying to become a more courteous and empathetic person.

The episode’s central location—the labyrinthine tunnels below Tanbarun Castle, loaded with surprise traps, dead ends, and soggy tunnels—is a clear visual representation of Raj’s own mental state and his relationship with Shirayuki. No matter how many times he snaps confidently and marches forward, it’s obvious he has no idea what he’s doing or where to turn next, and that despite his best efforts to tread carefully he keeps bungling his way into danger.

It’s also here, away from the prying eyes of the public, that these two people of wildly different social standing are able to speak their minds and meet as equals. As amusing as Raj is from an audience perspective, he’d be unbearable if you actually had to spend time to him, so I spent half the episode giggling and the other half begging Shirayuki to yell at him (she has the patience of a freaking saint). And, when Raj admits he’s convinced Shirayuki is just here to rub his incompetence in his face, she finally, finally, does.

Uh, d’you want me to answer that? ‘Cause…

In addition to that saintly patience, Shirayuki’s great strength (or maybe weakness, politically speaking) is that she’s able to meet every person as a person, regardless of their rank, age, or history. She’s been carefully supportive and polite throughout her time in Tanbarun, trying to play the part of the courteous commoner-guest, but when Raj drops his mask she does as well, snapping at him that she wouldn’t be here if she didn’t think there was some chance they could change their relationship.

The blocking here neatly describes the pair’s positions: Raj may technically be elevated above Shirayuki, but that’s just an accident of the landscape; she’s the one standing straight and tall while he’s crouched like a vassal swearing fealty (or someone trying to hide from a threat). Hidden from the public and no longer bound by their expectations, the two are at last able to come to an understanding of sorts. Small wonder that they then immediately find a way out of their gloomy maze and back into the sunlight.

I’m not sure if Raj really does have romantic feelings for Shirayuki, but it’s obvious that her actions—in particular the fact that she’s the only person around him who actually tells him when he’s making an ass of himself—have affected him profoundly, forcing him to reconsider the way he governs and treats others.

By the end of this episode, he may have started moving from fear into respect, which should help him calm that overbearing need to seem “regal” in front of her. Whether that will lead to a proper friendship has yet to be seen, but it should help the two hold an actual conversation over tea, at least. 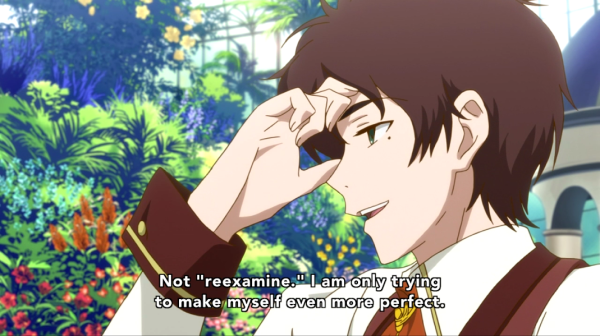 *facepalms into next week*

On the other side of the story, Zen is trying to balance his search for Kazuki with his princely duties, which leads to both a cameo from Kihal (whose messenger-birds just may come in handy in the coming episodes) and a moment for Mitsuhide to confront Izana when he spots him (as always) watching Zen from above and afar. To Izana’s credit, he readily admits to using this separation as a way to “test” ShiraZen’s bond, although his little “I wonder how they will fall in the future” betrays his own cynicism.

I confessed last week to not liking Izana very much (as explained in the comments, I find his behavior smug and stand-offish, regardless of intentions), but there’s no denying he’s well-written, a clever politician and a forward-thinking ruler. He could stand to be more honest with his brother, but Mitsuhide’s confrontation does highlight a worthwhile counterpoint: Izana may not have explained himself to Zen, but Zen never asked Izana, either. Zen respects (and is intimidated by) his brother to the point where it cripples communication between them. That’s something he’ll need to work on if the two are ever going to meet as true allies and equals.

I think Izana is trying to smile affectionately here. I’m not sure he’s succeeding,but…

In plot-moving news, Kazuki has reached Clarines, and Mihaya has gone after him. Ambitious as ever, Mihaya planned to capture him and earn some accolades/money for his actions, but Kazuki has a better idea: Team up with me to snag Shirayuki and earn your cash that way. And while we not hear Mihaya’s final answer, those moths banging around that lantern are about as unsubtle as foreshadowing can get.

4 thoughts on “Snow White with the Red Hair – Episode 15: “Indecision Caused by Confusion””