It’s hard out here for a prince.

Snow White continues its recent trend of following two chronologies, keeping us up to speed on current palace events as well as fleshing out Zen’s history, giving us more insight into not just our resident prince, but the people around him. At its core, though, both stories are about the same thing: How a person finds a balance between being a public, political figure, and a plain ol’ human being. 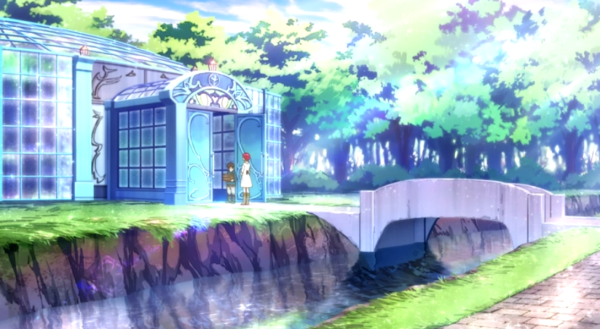 The early moments of the episode plunk us down right where we left off last week, and while Shirayuki may be unperturbed by the gossip about her and Zen, he’s not so comfortable with it, though his reasons have nothing to do with his personal emotions. No, he’s worried about the possible political ramifications for Shirayuki, either from nobles who think they can cozy up to her for favors or those who may see her as a threat (or barrier between themselves and their own royal marriage).

But Zen’s not the type to smother Shirayuki, so he offers her a single bodyguard: Obi, whose position in Zen’s service remains a secret to the rest of the palace, making it difficult for anyone to connect Shirayuki’s new companion to the prince. That Zen makes it a point to ask the Chief Herbalist for permission and lets Shirayuki know she can refuse Obi’s company speaks hugely of Zen, both as a public figure and a plain ol’ human being. He wants Shirayuki to be safe, but he’s not going to override her personal agency to do it. Be still, my heart.

“Heyyyy, new bestie! Remember me? The guy who almost shot you with an arrow? Good times.”

Obi continues to be brash and tactless, and it’s heavily hinted that he’s developing his own set of feelings for Shirayuki, but she handles his oddities with her usual blend of composure and polite directness, so the two get on okay. The main point of their new partnership is to open the door to the past when Obi, sensing Shirayuki’s affection for Zen, asks if she ever wishes Zen wasn’t a prince.

Shirayuki takes offense to the question and doesn’t grace it with a response, but Zen and Mitsuhide overhear the exchange, and it weighs heavy on both. And hey, now that Shirayuki’s passed out courtesy of the Chief Herbalist’s potent potables, I reckon now’s as good a time as any for a flashback! 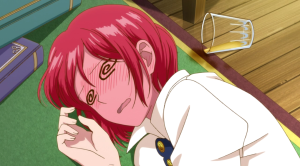 This week’s memories come on the heels of last week’s tale, as our main antagonists are a group of rebels from the recently deposed Lido family (who, you’ll remember, Izana kicked out of power after they robbed from the poor to give to the rich). Snow White continues to tread the line between fairy tale and courtly drama, acknowledging political concerns and the (sometimes violent) repercussions of its characters’ actions. This may look and sometimes feel like a world where the bad guys get defeated and the good guys live happily ever after, but it’s proving to be much more complicated than that, a fact that’s made painfully clear this week.

On its surface, this is the story of how Mitsuhide Louen (of the Sereg Knights!) came to serve Zen. The beginnings are almost hilariously mundane: Mitsuhide came to the palace to serve the crown prince, but Izana put him in charge of Zen instead. While this initially feels like a slight, Izana is (as always) three steps ahead of everyone else, and gave Mitsuhide this job because he was worried about Zen’s safety. Along the way, Mitsuhide proves himself not just a capable bodyguard, but a concerned and refreshingly direct attendant willing to chide Zen for his “coldness.” The two grow closer, a fact demonstrated as neatly through staging as it is dialogue. 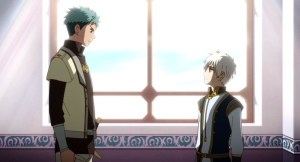 Mitsuhide also slowly comes to understand Zen’s own lonely position. With his brother busy ruling the nation and the nobles too respectful to approach him as an equal, Zen is isolated and shut up in the palace, and his one friend—Atri, a “lowly archer guard”—has to meet him in secret. Izana says that Zen is “rebelling” from his role as a prince, and it’s easy to understand why. His scenes with Mitsuhide and Atri are an exercise in contrasts, showing us both Zen the Prince and Zen the Person, and he’s far more comfortable as the latter.

Zen and Atri have an easygoing friendship defined by how, well… normal it is. They tease each other, spar, share food and gossip and the occasional personal secret. It’s a relationship of equals, and it’s clear these are the kind of interactions Zen would prefer. Izana is the politician, the clever schemer who keeps his cards close to his chest and always has a backup plan. Zen’s “just” a nice kid who wears his heart on his sleeve and expects others to do the same (and resents it when he doesn’t think they are).

Which, of course, only makes Atri’s deception all the more traumatic for him.

Curse your sudden but inevitable betrayal!

The final confrontation is a one-two gut punch, because not only does Zen lose the one person he considered his friend, but he’s not even the final target. He’s a pawn the Lido family used to get to his brother. Heck, you could argue he’s a pawn his brother used to get to the Lido family, too. Zen’s position in the middle of this conflict has nothing to do with him as a person. It’s all bloodlines.

It’s those same bloodlines that Atri curses, condemning the aristocratic hierarchy which grants privileges and riches to people who haven’t necessarily done anything to earn them. He’s not wrong, and Zen seems to acknowledge that, but that doesn’t justify Atri’s actions either. Zen’s only “crime” was being born at the top of an unfair system, a system he’s beginning to understand and dislike as much as Atri does. He shouldn’t have to suffer for the circumstances of his birth anymore than Atri should.

I seriously doubt Snow White is going to go full viva la revolution on us, but it is interested in these social imbalances and, more importantly, in how the people in power can best wield their privilege for those without. We’ve seen how hands-on and personable Zen is in the present day, and there’s no doubt that person wouldn’t exist without Atri’s betrayal. As devastating as this moment is for him, it’s a major turning point in how he sees both himself and his position in the world.

I hope Mitsuhide’s also trained in the Art of the Hug, ’cause…

Zen’s story is not, in broad strokes, all that original or groundbreaking. There are countless tales of princely or noble characters having their “friends” use them or turn on them for sociopolitical reasons. What sets this one apart, though, is how it connects to Zen’s current mentality and motivations.

Usually these betrayal tales show up as a way to justify a character’s coldness or trust issues—an, “Oh, he’s a jerk right now because of this sad thing that happened to him in the past” sort of thing. Woobification, if you will. But Zen isn’t like that at all. Instead, he’s taken something painful and turned it into a form of strength, becoming more empathetic and responsible over time. He’s an example of how something can affect you, even hurt you, without necessarily breaking you. And that makes him and his story a far more admirable and inspiring one than your usual traumatized romantic hero.