I hope none of you got whiplash from all those twists and turns we just took. 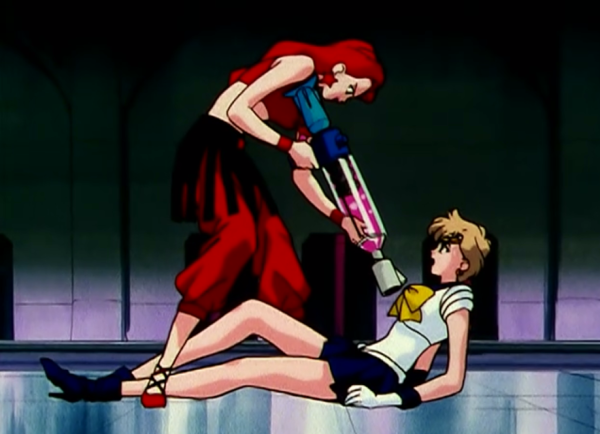 We found the plot! We found ALL of the plot! Or, to be more accurate, a certain someone jumped out of their time machine and threw the plot down at our feet. Honestly, the more I think about these two episodes, the messi(ah?)er they are in terms of coherent writing and execution, but as far as emotional reaction and pure entertainment value go, they were pretty dang exciting and did a whole lot to forward the overall story line. So, all in all, I’d call them a success, even if I am going to mock them a little mercilessly along the way. Hey, it’s part of the job description.

Hop in and strap on those seatbelts, gang. Eudial’s takin’ us for a Sailor Moon Spin. 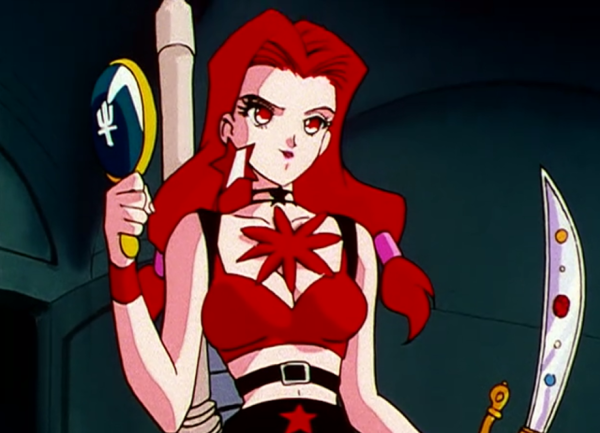 Michiru and Eudial both have a pretty good feeling that a talisman is gonna show up this week, which would be a fair bet after last week’s secret identity leak. Eudial’s extra-motivated, too, because her fellow Witches think she’s getting a little too big for her pantaloons, and have taken to bullying her with thumbtacks and angry notes and locker pranks.

I call it “Operation: Eudial’s a Weirdo Who Keeps Snails in Her Locker!“

So she jerry-rigs a talisman-finder out of a floppy disk and some canned oranges. Like ya do. And it works! So she calls up Haruka to gloat about how she’s TOTES WINNING and THEY HAVE NO CHANCE NOW and DAMMIT THIS ANSWERING MACHINE CUTS OFF TOO SOON YOU JERKS. (No one enjoys being a villain more than Eudial does.) Oh and also she offers to let HaruMi join the Death Busters and gives them the address of a remote under-construction cathedral where they can talk it out, if they’re interested.

Admiral Ackbar might have a thing or two to say about this invitation, but HaruMi think it sounds like a plan, mostly because they want to get the talismans before Eudial does. Oh, but before they go off to possibly murder people for the greater good, they need to hold hands and gaze deeply into each other’s eyes.

Then everyone broods at the rain for a while, until Haruka calls up Usagi and asks her to meet them at a secret aquarium on the top floor of a tall building, because reasons. Usa tries to make nice with them again, but Haru’s having none of it—she warns Usagi to stay away from them and even steals her brooch for good measure. It’d be a real nasty scene if it wasn’t painted in such sorrowful blues and blacks, giving it a tone that’s more tragic than malicious. Ikuhara’s directing this episode, BT-dubs, so it has predictably great imagery (and even greater sight gags), even if some of its logic is a little… yeah.

And speaking of that logic: RANDOM DOORS OPEN IN THE AQUARIUM, revealing a HELICOPTER manned by an INVISIBLE PILOT, and Sailor Duo FLY OFF into the sunset. It makes zero sense, and that is why it is officially the greatest entrance or exit in Sailor Moon history. Eat your heart out, Tuxedo Mask.

Things look hopeless for Usagi, at least until a familiar Time Lord going by a name so fake it may’s well be “Jane Smith” shows up to Doctor Ex Machina this noise. 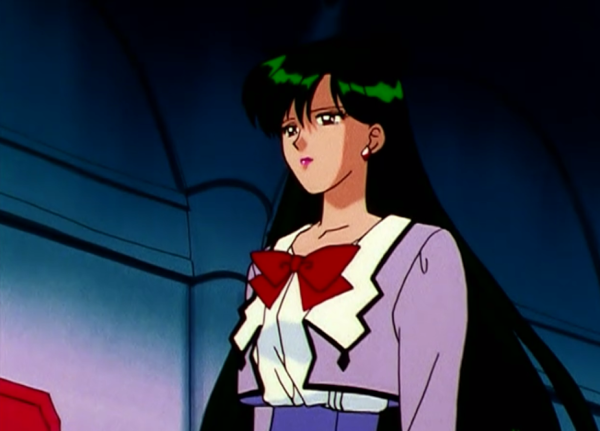 “Yes, I know I said I couldn’t leave my space-time dimension no matter what, but the creators have written themselves into a corner, so… ta-daaaa!”

Sailor Plu—I MEAN, Jane Smith tells Usagi where HaruMi are going and urges her to help them. So Usagi hops a ride on the *Ikuhara mumbles incoherently under his breath* and follows Sailor Duo to the Marine Cathedral.

A good thing she does, too, ‘cause the Duo are in a heap of trouble. Eudial has basically rigged the entire Cathedral to be her personal air hockey/Foosball/pinball game of death, and attacks the pair with flying Cupid tablets until she at last knocks out Michiru and kidnaps her. That’s when Eudial (in one of the episode’s best jokes) busts out her Bach-playing organ cassette tape and makes her big reveal: Michiru’s heart had a talisman all along!

Haruka finds Michiru tied up in the chapel, but when she tries to cross the Ominous Platform over the Gaping Chasm to reach her, Eudial’s motion-censored Cupid tablets blast her with love arrows (hey, I don’t write it, I just recap it). With Haruka beat to hell, Eudial can now unveil her Tweest #2: Haruka’s got a talisman in HER heart as well!

Unsure whether to stop Eudial or show her where to aim, Haruka hesitates, but Michiru’s not about to take this pinned down. She tears free of her thorn prison and makes her slow, painful way to Haruka, despite taking continuous Cupid damage, and at last reaches her beloved—only for Eudial to shoot her (and most of the audience) through the heart, revealing the Mirror Talisman. 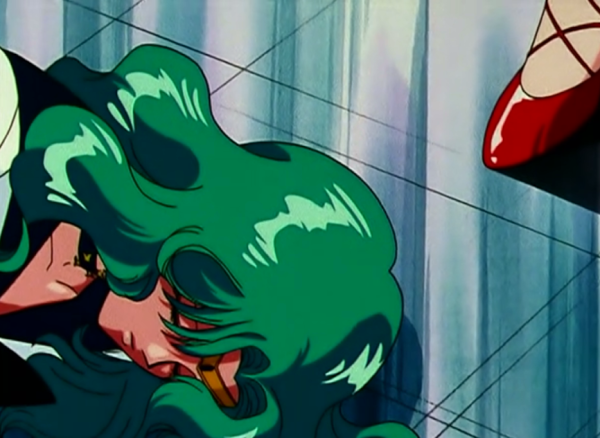 Usagi shows up (rockin’ the Messiah Look) before Eudial can land the killing blow on Haruka, and proves that even sans brooch, she’s still got spunk, as she body slams Eudial off the bridge and into the chasm. Usa’s desperate to get Michiru’s heart back in her body, but Haruka has far bloodier plans. She entrusts the talismans and the future to Usagi, takes Eudial’s gun, and blasts herself straight through the chest.

True to Eudial’s predictions, Haru’s heart becomes the sword talisman, which is fitting seeing as how Sailor Moon JUST STABBED US ALL IN THE HEART FOR 25 SOLID MINUTES.

But I’m sure we’ll have walked it off before the next episode is over. You too, Sailor Duo. It’s definitely just a flesh wound.

Episode 111 – The Messiah is in Another Castle

Things were getting a little TOO serious at the end of that last one, so this one begins with some good news—HaruMi are still alive—and some action sequences, as Eudial returns to wreak havoc with her Firebuster 2.0. She steals the talismans, drops the gals into an unquenchable ring of fire, and makes her dastardly escape.

Good thing we’ve still got a couple allies left who rode the *Ikuhara mumbles incoherently* to this remote, deserted island—and heyyy, lookie there! I do believe someone just leveled up their Entrance Pose Skill! 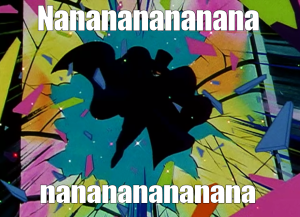 Once our handy-dandy Luna-P puts out the flames, the gals go chasing after Eudial while The Tux keeps an eye on our comatose Duo (he’d just get captured again if the scouts took him with them, and ain’t nobody got time for that). Eudial’s goo gun slows down everyone but Sailor Moon, so pretty soon it’s just the two of them facing off in a big ol’ church nave.

Firebuster 2.0 is a fearsome beast, and Usagi’s clearly outmatched. But you know what Eudial doesn’t have? DOCTOR EX MACHINA, THAT’S WHAT! Enter “Jane Smith,” who quickly transforms into Pluto and reveals that the gem at the end of her staff is none other than the Jewel Talisman of Legend. And, because she IS such a skilled Doctor, she’s even able to extract HaruMi’s hearts from their talismans and return them to the girls.

The talismans generate an absurd amount of Moon Disco Power and produce the Grail. Usagi reaches it a half-second sooner than Eudial, unlocking its PHENOMENAL COSMIC POWER, which is so PHENOMENAL and COSMIC that it gives her and Chibiusa wings.

Apparently the Grail is full of Red Bull.

From there, it’s a snap for Usa to chuck Eudial out a window. She flees back to her station wagon, already thinking up her next scheme, but cutesy coworker and snail lover Mimete has different plans. She calls Eudial up to inform her that, sorry, they’ve decided to let her go—right to the bottom of the ocean, in fact, courtesy of some cut brakes and a busted guard rail.

It’s like my mama always said: All that reckless driving will be the death of Eu.

Meanwhile, back in the Cathedral and safe from my puns, Mamoru shows up just in time to catch the grAILING Usagi (just kidding—nowhere is safe from my puns!), who’s all tuckered out from her disco party. But wait, says Haruka! The Messiah is supposed to be 100% OP, and Sailor Moon is only OP when the plot calls for it, which means she isn’t the Messiah after all!

Well, shucks. Guess we’ve got ourselves an Act 2 story line, then.